Opening statements were heard in a Nevada courtroom this week in a trial over a Las Vegas man's claim that a surgeon left a 57-inch wire inside his body nearly 15 years ago.

German “OT” Ortiz, 70, filed a lawsuit against the Heart Center of Nevada and Dr. Mark Taylor, the surgeon who performed his angioplasty in 2005.

Ortiz’s attorney told a jury Tuesday that an X-ray in 2015 revealed the wire ran inside Ortiz's body from his aorta to one of his thighs, the Las Vegas Review-Journal reported.

Doctors were able to remove the bulk of the wire in a surgery a year ago, but 20 inches still remain near his thigh, the Review-Journal reported. 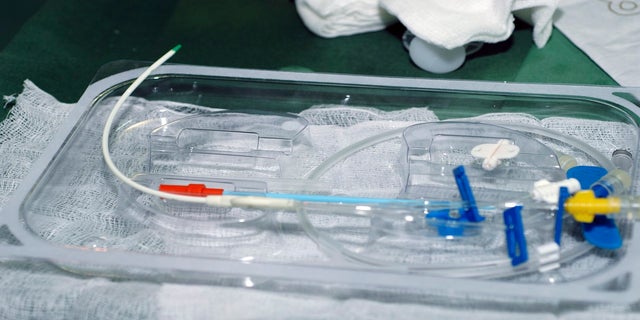 Central Venous Catheter Insertion, Some of the remaining equipment that will be used to finish the catheterization remains in the sterile pack kit, including guide wire plus tubing and the triple lumen catheter. (Getty Images)

His attorney said the wire was a guide for a catheter necessarily inserted during the angioplasty, but when the catheter was removed the wire remained.

Taylor’s lawyer said he met the standard of care and that another doctor must have left the wire in because he was never informed it was missing.

Ortiz’s lawyer said a doctor “must pay careful attention” during surgery and is responsible for "any injuries caused," the Review-Journal reported.

The trial is expected to last a week.