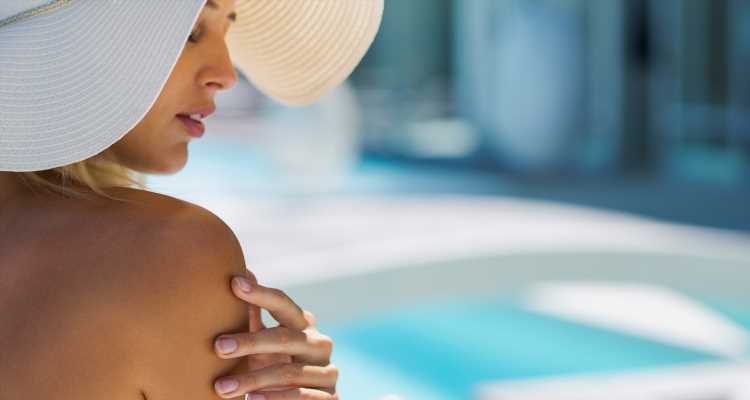 If there’s one good thing about skin cancer, it’s that you can spot it yourself—if you know what to look for. And the earlier you find the signs of skin cancer, the sooner you can seek treatment. That’s incredibly important: Skin cancer is the most common cancer in the United States, with more cases diagnosed every year than all other cancers combined.

You already know that spending too much time in the sun without applying sunscreen can boost your chances of skin cancer—but there are tons of other risk factors to keep on your radar, too. Getting just one bad sunburn, having fair skin or red hair, living at high elevations, flying frequently or driving a lot, exposure to certain chemicals, and having a family history of skin cancer can all spike your risk of the disease.

That’s why it’s so important to be vigilant, as skin cancer is very treatable if you catch it early. “The bottom line is if your skin starts forming a spot that doesn’t look like anything else and it’s not getting better, it’s growing, or it’s acting differently than your other moles, get it checked out,” says Saira J. George, MD, assistant professor of dermatology at The University of Texas MD Anderson Cancer Centre.

The Skin Cancer Foundation recommends doing a self-examination once a month. Don’t rush through this! Do it when you have time to examine your skin from head to toe. Use mirrors as necessary to check your back and other hard-to-see places or ask a partner or family member to help you.

What exactly should you be looking for? The following pictures show what different types of skin cancer look like, as well as how to differentiate between them. Warning: They’re a bit graphic—but knowing how to spot a dangerous mole or lesion could save your life.

Basal cell carcinoma is the most common form of cancer in the United States and accounts for about eight out of 10 skin cancers, according to the American Cancer Society (ACS). Basal cell carcinoma forms in basal cells, which are found in the lower part of your epidermis (the top layer of your skin).

Basal cell skin cancers can pop up anywhere, but most frequently occur in areas of the body that are often exposed to ultraviolet (UV) light. Even though it’s a common form of skin cancer, basal cell carcinoma tends to grow very slowly, rarely spreads to other parts of the body, and is very treatable, the ACS says.

Basal cell carcinoma symptoms: “Unfortunately, basal cell carcinoma is easy to ignore because a lot of times people think the spot is a pimple or blemish that won’t heal,” Dr. George says, especially on the face, neck, and ears. Here are the various skin changes to look for:

It’s important to note that basal cell carcinomas are very sensitive and bleed easily after shaving or minor injuries, the ACS says. If what you think is a nick or cut doesn’t heal within roughly a week—or you notice any of the changes above—see your doctor.

Squamous cell carcinoma is the second most common type of skin cancer, accounting for about two out of every 10 cases, the ACS says. These cancers form in squamous cells, which are the flat cells that constantly shed in the outer part of your epidermis.

Squamous cell carcinomas commonly appear on sun-exposed body parts, including the face, ears, neck, lips, and back of the hands. Although this type of skin cancer can spread to other parts of the body, this is not typical and squamous cell carcinoma is easy to treat when spotted early.

These skin cancers can also grow as a flat patch or become larger and nodular, adds Anthony Rossi, MD, board-certified dermatologist at Memorial Sloan Kettering Cancer Center. Here are other telltale signs to look out for:

Melanoma is a rare form of skin cancer (it only makes up one per cent of all skin cancers), but it’s the deadliest since it easily spreads to other parts of the body when not caught early.

This type of skin cancer arises from the uncontrolled growth of a type of skin cell called melanocytes, which are responsible for producing pigment in the skin, explains Jennifer DeFazio, MD, FAAD, an assistant clinical member at the Memorial Sloan Kettering Cancer Center.

Also called solar keratosis, actinic keratosis is a pre-cancer or a premalignant lesion, says Dr. Rossi. Like other types of skin cancer, it’s caused by too much exposure to UV light, and most people develop more than one affected area. Some (but not all) develop into squamous cell skin cancers, so it’s important to spot actinic keratosis before it advances.

Actinic keratosis symptoms: These lesions often occur on the face, lips, ears, back of the hands, and arms, but can form on other areas exposed to UV light. Here’s what to look for:

Although rare—only 2,000 cases are diagnosed each year—merkel cell carcinoma is a dangerous forms of skin cancer, as it can grow rapidly and spread to other parts of the body.

This type of skin cancer (also known as neuroendocrine carcinoma of the skin) begins in merkel cells, which are found in the epidermis. Since they’re so close to nerve endings, these cells play a role in our sense of light touch, the ACS says.

Merkel cell carcinoma most commonly impacts people over 70 years old, and men are nearly twice as likely to be diagnosed with it than women.

This article originally appeared on Prevention US.