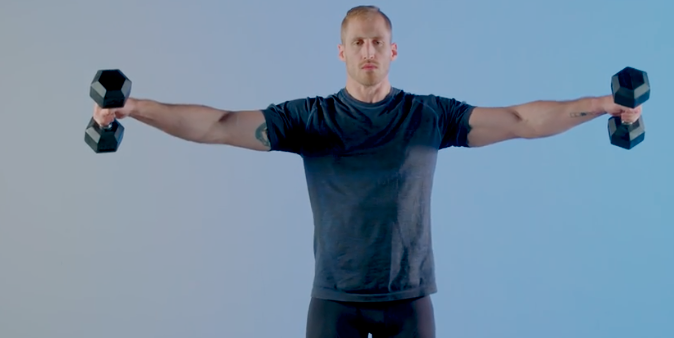 The lateral raise is a core training staple that can build stability and strength in your shoulders—but are you sure you’re even doing the exercise correctly?

For this basic gym necessity, you shouldn’t settle for anything other than perfect form—especially because it’s such a simple, essential movement that should serve as one of the centerpieces of your training plan. Let Men’s Health fitness director Ebenezer Samuel, C.S.C.S. and associate fitness editor Brett Williams guide you through the move’s subtleties, saving you from the bad habits that are keeping you from unlocking your fitness potential.

Before you grab a set of dumbbells and start swinging them around, take note that it’s extremely important to pay attention the movement here. You’ll miss out on the potential shoulder gains and open yourself up to injury if you use too much body momentum and wind up using the wrong muscles to do the work.

Eb says: It’s very common, especially if you’re using a heavy weight, to shift your torso forward just a little bit, rocking at the waist to get the weight started. In some cases, that’s an advanced technique being used by a bodybuilder, and it has value. But in most cases, you’re simply taking away from the lift. You’re using momentum to get the weight started, and missing out on a chance to challenge your shoulders to start the motion instead. You’re also going to struggle to control the weight when you lift it upwards.

Avoid doing this by erasing the rock; squeeze your glutes and keep your abs tight and work to keep your torso steady as you lift the weight. Another key to avoiding this rock: Don’t start with the dumbbells touching. Start with your arms close to perpendicular to the ground.

Eb says: This is a lateral raise, but that doesn’t mean your arms should be fully at your sides. In fact, for the health of your shoulders, they shouldn’t be completely at your sides.

Instead, you want to work the lateral raise in what’s called the “scapular plane.” That’s about 20 to 30 degrees in front of your torso, so your arms are at a slight angle when you’re raising the weight. You’ll still get plenty of work for the lateral heads of your shoulders, but you’re working at an angle that makes stuff far easier on your rotator cuff tendons.

Eb says: This one’s also all about rotator cuff tendon health (and thus the long-term health of your shoulders). As your arms get close to parallel with the ground, think about turning your thumbs slightly upwards to the ceiling. This doesn’t need to be a lot, but by shifting them upwards just a little, you’re biasing your shoulders into external rotation. That’s a nice, safe position that, once again, opens space for your rotator cuff tendons to move.

You’ll see some lifters advise to do lateral raises and point your thumbs down at the top of each rep, sometimes known as “empty can” lateral raises. They’re doing this to attack their rear delts, and to some extent it works—but the risks simply aren’t worth the benefits here. You’re closing down the space between your shoulder bone and your clavicle and opening the door for shoulder impingement issues. Find a safer rear delt exercise and skip the empty cans.

It’s fine to train your traps, but this isn’t a trapezius exercise; the lateral raise is meant to help you isolate and focus on the lateral head of your deltoid. Letting your traps take over removes tension from your shoulders, making the lift easier.