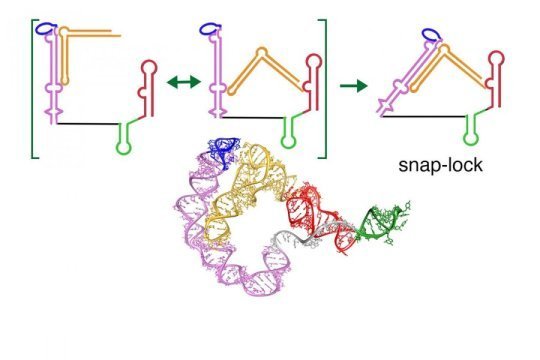 In a discovery that points to potential new antibiotic medicines, scientists from Rice University and the University of Michigan have deciphered the workings of a common but little-understood bacterial switch that cuts off protein production before it begins.

Many gram-positive bacteria use T-box riboswitches to regulate production of proteins that utilize amino acids, the basic building blocks of all proteins. A study in Nature Communications describes how one of these switches, a glycine regulator in Bacillus subtilis, flips and locks into the “on” position via a snap-lock mechanism. Engaging the lock increases production of proteins that utilize glycine, the simplest amino acid. Researchers also detailed the switch’s “off” position: A single glycine at the tip of the locking arm blocks protein production.

“T-box riboswitches are intriguing because they are regulated — turned on or off — by molecules central to protein production,” said study co-author Edward Nikonowicz, professor of biosciences at Rice. “While they were discovered a quarter century ago, it’s not been entirely clear how they operate. By highlighting their structural and kinetic details, we hope to spur interest in these switches as potential targets for new antibiotics.”

New antibiotics could help avert a looming health crisis, Nikonowicz said. The Centers for Disease Control and Prevention expects antibiotic-resistant bacteria to kill at least 23,000 people in the U.S. this year, and if current trends go unchecked, the World Health Organization estimates that by 2050, drug-resistant pathogens will kill 10 million people per year worldwide.

T-box riboswitches like the one highlighted in the new study are vital to many gram-positive bacteria, a broad class that includes pathogens that cause tuberculosis, gangrene, botulism, anthrax, inflammation of the inner heart lining and other diseases.

T-box riboswitches are located on strands of messenger RNA (mRNA), blueprints for proteins that are copied directly from a cell’s DNA. In complex organisms such as animals and plants, the writing, or “transcription,” of mRNA takes place in a vault-like DNA storage facility called the nucleus. Only after mRNA leaves the vault can its message be used, or “translated,” into a new protein. Because bacteria have no nucleus, “transcription” of mRNA and “translation,” decoding of mRNA by ribosomes to make new proteins, happen in close proximity.

“Riboswitches are common in many bacteria, but not in humans, making them such attractive targets for new drugs,” said study co-author Nils Walter, the Francis S. Collins Collegiate Professor of Chemistry, Biophysics and Biological Chemistry at the University of Michigan. “T-box riboswitches regulate transcription, the writing of the messenger RNA itself, but use a locking arm borrowed from the translation machinery, making it a unique jack-of-all-trades.”

The mRNA blueprints are used to build proteins, the workhorses of biology. Cells employ millions of proteins at a given time, but each of these is made from the same 20 building blocks, the amino acids that T-box riboswitches help regulate in gram-positive bacteria. To make a protein, cells string amino acids end to end, like beads on a necklace, based on the order specified in mRNA instructions.

The locking arm trigger in the glycine T-box riboswitch is part of another molecule called transfer RNA (tRNA). There are many types of tRNA in cells, but each acts like a kind of car, shuttling payloads to the ribosome, where proteins are strung together. Each type of tRNA can only carry one type of amino acid.

In the new study, Walter and Nikonowicz designed an experiment in which glycine-specific tRNA molecules, some loaded with glycine and others unloaded, would pass by and randomly attach to a T-box riboswitch.

“Ed’s team was able to attach a fluorescent marker to the tRNA in a such a way that it wouldn’t interfere with their binding,” Walter said. “My lab employed a technique called ‘single molecule fluorescence microscopy’ to probe the dynamic associations of single T-box riboswitches with the tRNA, either when the glycine cargo was attached or not.”

Each time a tRNA with a fluorescent tag attached took up a position on the T-box riboswitch, a bright signal appeared in the microscope. By measuring exactly how long the signal lasted, and thus how long the molecules stayed in position, the team was able to reconstruct the binding speed and ultimately the locking mechanism for the switch.

Nikonowicz said he and Walter began the glycine T-box riboswitch project about 2 1/2 years ago.

“Glycine was the simplest case, in part because there’s an additional domain in the T-box sensing other amino acids,” he said. “There are questions about what this domain does and how it operates. Given what we’ve already learned about the glycine T-box riboswitch, I’d like to extend this work to see what we can learn from other types of T-boxes.”

Walter added the findings could also pay off in the emerging field of RNA nanotechnology, in which scientists are attempting to use RNA templates for precision engineering of complex structures.

“In the active, locked position, the T-box-tRNA complex has a very stable three-dimensional shape,” he said. “It’s possible these could be exploited for ultra-stable ring-like complexes in novel biomimetic architectures.”