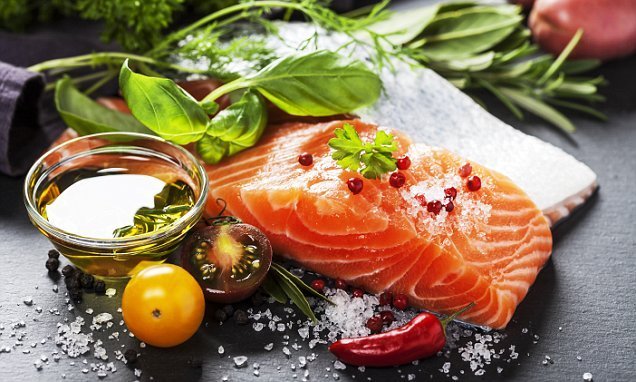 A Mediterranean diet protects against the harmful health effects of air pollution, a major study has found.

Researchers from New York University studied 548,699 adults across six states in America over a 17-year-period.

During that time they monitored the adults’ long-term exposure to certain types of air pollution including nitrogen oxygen and particulate matter. Antioxidants found in fruit, vegetables and wholegrains of a Mediterranean diet appear to counteract this effect

Consuming more fruit and fish, and fewer sugary drinks and snacks, are the most important aspects of a Mediterranean diet.

The researchers also looked at their eating habits and whether they adhered to a Mediterranean diet rich in fruit, veg, whole grains, fish and poultry.

The research found that across all states, adults were more likely to die from heart attacks and heart disease if they were exposed to higher levels of pollution.

But the increase in death rates was much less pronounced among adults who followed a Mediterranean diet.

For example, among adults who did not follow a Mediterranean diet, the death rates from heart disease increased by 10 percent for every 10 parts per billion increase in nitrogen dioxide they had been exposed.

But among those whose diet was very similar to a Mediterranean diet, the death rate only increased by two percent for every 10 parts per billion increase in nitrogen dioxide.

Similarly, the death rate of heart disease increased by 17 percent for every 10 micrograms per cubic meter increase in long-term average of particulate matter for adults who did not follow a Mediterranean diet.

But for adults who did, the equivalent death rate only increased by five percent.

Air pollution is thought to trigger heart attacks and other health problems by causing inflammation of the cells and chemical imbalances.

But researchers believe that anti-oxidants found in fruit, vegetables and wholegrains of a Mediterranean diet counteracts this effect.

Chris Lim, one of the researchers from the New York University School of Medicine said: ‘Previous studies have shown that dietary changes, particularly the addition of antioxidants, can blunt the adverse effects of exposure to high levels of air pollution over short time periods.

‘What we did not know was whether diet can influence the association between long-term air pollution exposure and health effects.’

The study was presented today at the American Thoracic Society’s annual conference in San Diego, California.

Professor George Thurston, the lead author said the ‘adoption of a Mediterranean diet has the potential to reduce the effects of air pollution in a substantial population in the United States.’