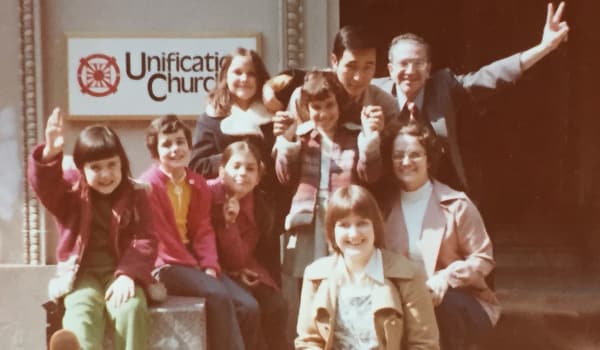 “The best seats I ever had at Madison Square Garden were at my mother’s wedding.”

This is how I explain part of my childhood — the cult part — to people who don’t know me. You have to be of at least a certain age to get the reference. Back in the early 1980s Rev. Sun Myung Moon, a self-proclaimed Messiah and leader of the Unification Church, led a mass wedding at Madison Square Garden. My mother, older brother and I were members of this church — we were “Moonies” — and my mother was one of the 4,150 Moonies married during the ceremony.

We hadn’t always been Moonies. My mother joined when I was 10 years old and brought my brother and me along with her. We became fervent followers — I spent Sunday afternoons standing on a box in the then-seedy Times Square shouting through a bullhorn at the sinners on the street doing my best to save the world for God.

When you grow up in a cult, you have no idea it’s a cult.

My life, mind and soul were dedicated to Moon and his teachings. His children were some of my best friends, and I was a frequent guest at his dinner table or in his pool. I believed in his Truth and pledged my devotion — and blood, sweat and tears.

I pledged my devotion until, for a variety of interrelated reasons, I questioned my devotion. While the church’s puritanical mandates had not only been a haven from the nonconventional (some might say dysfunctional or dangerous) lifestyle my parents had lived — and exposed my brother and me to — in our earliest years, toward the end of high school, I began to doubt if I could or would live my life as a Moonie.

It was not a simple or easy thing to do.

When you have learned and believed that there is a Truth and that there is “right” and “wrong,” it’s terrifying to walk away from what you have known as right. One of the things about mind control and extremist situations is that they teach you that questioning and doubting are signs of weakness and sin. Any inklings of misbelief are a sign that Satan is conquering you. Any hesitation or uncertainties are your defects. You think, “Why?” or “Why not?” and your brain screams, “Get out, Satan,” as you were taught to do. You fall to your knees and repent for your wickedness.

Questioning — or leaving — is not a simple or easy thing to do.

I did slowly find my way out of the Moonies. I went to college, and the physical separation gave me a bit of space to try to think things through for myself. The problem is I had learned not to think things through for myself. Instead, I found myself wracked with anguish and tormented by the thought of leaving the Truth and the Messiah — not to mention almost everyone and everything I knew and loved. I nearly threw myself over a bridge just off campus. I questioned endlessly — in my mind and to others — “What should I do? What should I do?”

Finally, a friend offered me, “Maybe it’s right, but it’s just not right for you.” I clung to that as my lifeline and began to pull myself further and further away.

But I don’t think I felt good about what I was doing. My sophomore year, I became anorexic. My junior year, I developed a mild cocaine addiction. My senior year, I dove into a relationship with someone who was already taken and became the “other woman.” A few years out of college, I found myself engaged to a man who drank and drugged (hard) with my dad and who was mean to me when he did.

In retrospect, I think I was punishing myself for leaving the Messiah and disappointing God. Luckily, that engagement became a bit of a bottom for me. (Funny that the anorexia, cocaine addiction and other disastrous relationships didn’t.)

Apparently, there were many, many reasons why I would be with an alcoholic, including the fact that I was raised in a cult. It does warp your mind… and your self-esteem.

They never told me if I was with an alcoholic. They never told me very much other than, “Keep coming back. It works if you work it.” But they offered me hugs and understanding. And by coming back — and back and back some more — and by adding mindfulness, meditation, yoga, self-compassion and acceptance, a few decades of therapy (and trauma therapy) and at times, practically anything I could find that would up my self-love and self-care (and, again, self-compassion) I began to build a new life.

I have built a life that astounds me. A life I never knew I could have. I life I never knew existed. I certainly have emotional and mental scars from my childhood, but I’ve learned to live with them, to lessen them and to let them be OK.

I know growing up in a cult is different. When I told both my kids about my experiences, they both responded with, “I didn’t see that coming,” to the cult part. Who would, I guess? I also know my emotional and mental scars are pretty universal. No one seems to identify with my actual story; many people identify with my pain and struggles.

I also now know that no matter what one has endured — and there are many people who have endured far worse than I have — there is a way to happiness and contentment. There is a way to peace. It can take a great deal of work, but it’s worth it.

Lisa Kohn’s book, To the Moon and Back: A Childhood Under the Influence will be available for purchase in September 2018.