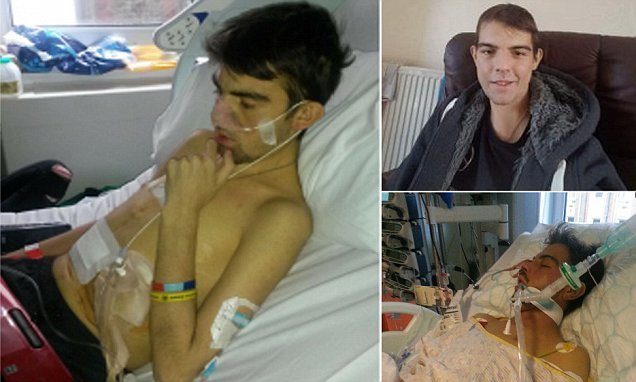 Student who defied the odds: 23-year-old is recovering from his SIXTH liver transplant and will finally start university this year after battling rare condition since he was a baby

A 23-year-old man who has had six liver transplants because of a rare condition will start university later this year after battling the odds to lead a normal life.

Steven Featley, from Stoke Ash in Suffolk, was born with biliary atresia, a rare disease in which one or more of the liver’s bile ducts are narrow, blocked or missing.

He was diagnosed just six weeks after he was born and had his first liver transplant when he was 14 months old, and the most recent one in November last year.

Mr Featley has had 15 operations during his life, including the removal of his spleen, and had post-traumatic stress disorder because of his ordeal.

But now, he says, he is looking forward to ‘getting out into the world again’ and feels ‘incredibly lucky to be here’. 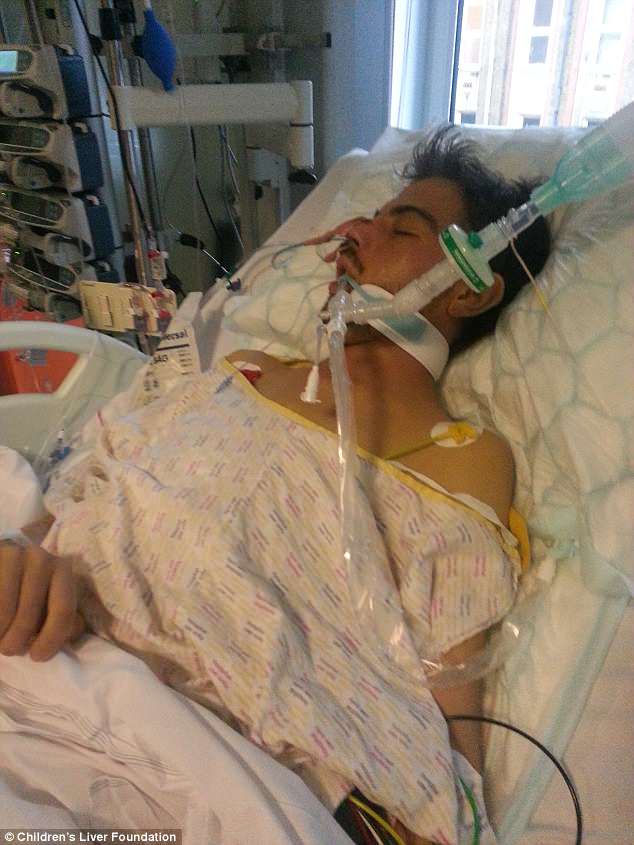 Steven Featley, 23, had his sixth liver transplant in November last year – he has had 15 operations, including having his spleen removed, because of his rare condition

Mr Featley will begin his journey towards becoming an accountant at the University of Suffolk in September, after recovering from his latest transplant last November.

It is unknown whether this transplant will be Mr Featley’s last – only time will tell if it will develop complications as his previous operations have done.

However, people who have had transplants require lifelong check-ups to monitor their condition and medication to stop the body rejecting the new liver.

Mr Featley said: ‘I was supposed to start [university] two years ago but ill health prevented me. I needed my sixth liver transplant in November, from which I am still recovering.

‘Liver disease is strange as you don’t notice the symptoms until it is often too late. Then, when it hits you, it hits you bad.

‘I can’t tell you the number of times I have been in hospital, the number of ultrasound scans and blood tests I have had in my life.

‘I am looking forward to getting out into the world again, socialising and studying for my degree.’

Mr Featley had his first transplant at King’s College Hospital, London, when he was just 14-months-old.

Three months later, he suffered complications which meant a second transplant was needed.

At the time, he was only the 12th person in the UK to receive a partial transplant from a living relative — his mum Eira.

Enjoyed 10 years without surgery or complications 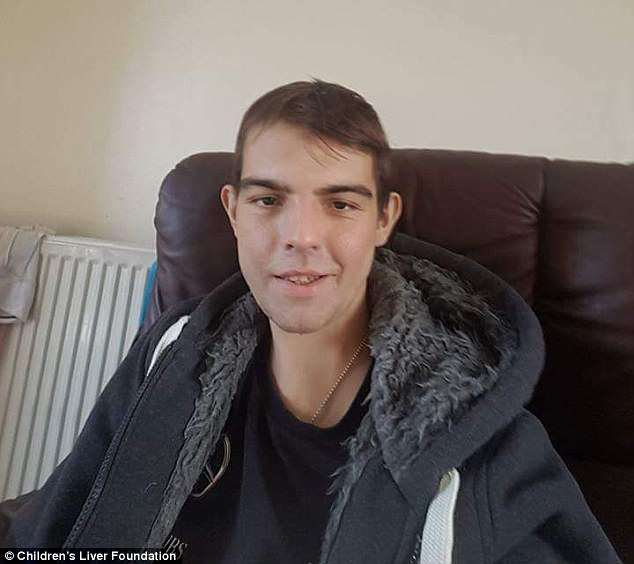 Mr Featley has biliary atresia, in which a patient’s bile ducts in their liver are blocked or do not work properly, causing bile to build up in the organ and damage it beyond repair 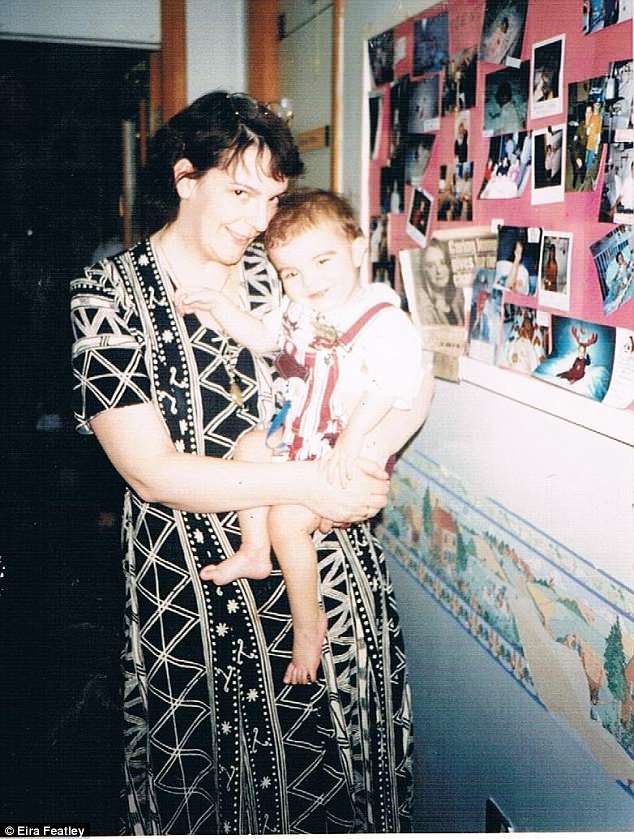 When Mr Featley was just one year old he had a transplant of part of the liver of his mother, Eira (pictured), and was only the 12th person ever to have had a partial transplant from a living relative in the UK

The surgery was successful for 10 years and Mr Featley was able to enjoy his early life.

By the age of 11, however, doctors discovered that the main vein into his heart was clotting again. He underwent a third transplant in 2006.

Biliary atresia is a rare condition in which a baby’s bile ducts in the liver are scarred or blocked and stop bile – a fluid needed for digesting food – flowing into the gallbladder.

Instead, bile builds up in the liver and damages it, leading to scarring, loss of liver tissue and function, and cirrhosis – liver disease.

According to Cincinnati Children’s Hospital Medical Center, the condition affects around one in 15,000 to 20,000 babies. Treatment varies depending on how severe the ill is.

Mr Featley had two life-threatening emergencies in 2013 and 2016 which required two more transplants.

WHAT IS BILIARY ATRESIA?

Biliary atresia is a rare liver condition in which the tubes that transport bile – a liquid used to digest food – become blocked or obstructed.

This causes bile to become trapped and build up inside the liver, where it damages the organ and causes scarring and eventually liver failure.

Symptoms of the condition usually develop during the first two months of a baby’s life.

It is a rare condition, affecting around one in every 15-20,000 children. 10 to 15 per cent of those with biliary atresia will also have problems with their spleen, heart, blood vessels or intestine.

The condition cannot be treated with medication and requires either surgery or a liver transplant.

‘I was not able to socialise the way other children did’

‘I knew that I was not well from an early age,’ he said. ‘The first two transplants took place when I was so young that I don’t remember them.

‘When I fell ill prior to my third transplant, I was in year six at primary school; I missed a lot of that year and, though I was welcomed back by classmates, I had very few friends, as I had not been able to socialise the way other children did.

‘I was used to mixing with adults rather than my peers.’

Mr Featley has been motivated to speak out after losing a friend to liver disease he met while at King’s Hospital last year.

He realises he is lucky to be alive. Others – including his friend, Autumn – are not as fortunate and die while waiting for a new organ.

In 2016/17, 457 people died while waiting for an organ transplant, according to NHS Blood and Transplant figures.

‘Hospital has been like my second home,’ Mr Featley said.

‘One day in August 2016, I received a box of sweets and a phone number from a girl called Autumn, who I had known through hospital when I was younger.

‘I am passionate about organ donation’

‘On Easter Sunday last year, I learned that she had died, waiting for her third liver transplant.

‘I am passionate about organ donation.

‘It upsets me to see babies and children going through what I did, and I know more than anyone how traumatic the experience is for their families.

‘My message to anyone is please join the Organ Donor Register and tell your family of your wishes. It is the greatest gift you can give as a human being.

‘Every day, people die on the transplant waiting list and more donors are urgently needed.’ 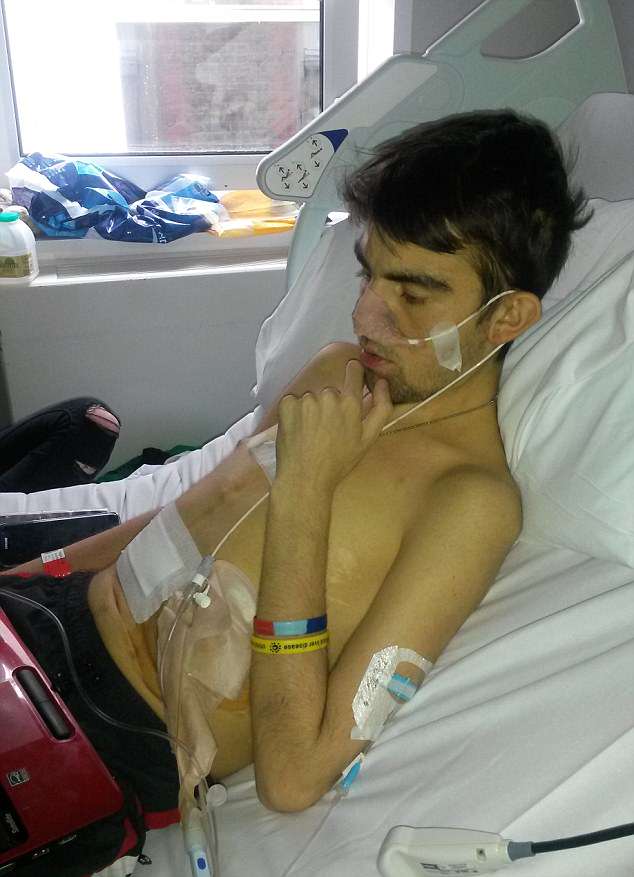 Mr Featley says he feels ‘incredibly lucky’ to be alive, and is looking forward to starting university and socialising normally again

Mr Featley says his experience has also taken its toll on his mental health, but the charity the Children’s Liver Disease Foundation has helped he and his family.

‘Although I believe I am mentally strong and have coped with a lot, I have had to have treatment for post-traumatic stress disorder,’ he said.

‘It’s not the kind of experience you can get through on your own.

‘I know how incredibly lucky I am’

‘The Children’s Liver Disease Foundation has been a real help to me throughout my life. The charity was there for my parents from when I was diagnosed age six weeks.

‘It provided information which explained what was wrong with me and, over the years, it has been there, providing a listening ear and constant support for me and my family.’

Mr Featley is now preparing to study for a degree in financial accounting.

He says he is fortunate to have been given so many chances when others struggle to get a single organ transplant, but he is determined to make the most of the life he has been given.

‘My ambition is to become a chartered accountant as I really want to prove that all this treatment has been worthwhile,’ he said.

‘The NHS has been brilliant and is the best health service in the world.

‘I know that my situation raises difficult questions and that many people will ask why I have had six transplants when there are others waiting for one.

‘All I can say is that, in each case, there were clear medical reasons for my transplants, all of which were outside my control. I know how incredibly lucky I am to be here.’

The Children’s Liver Disease Foundation (CLDF) is a UK charity which provides information, support, research funds and a voice for sufferers and their families.