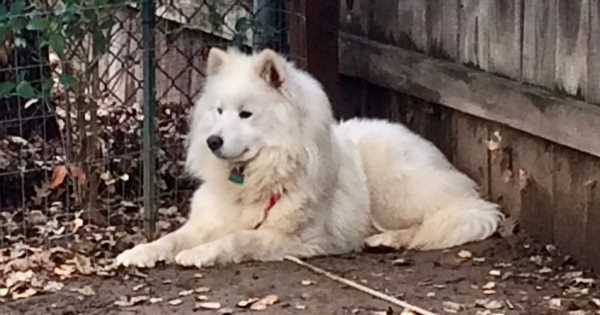 On November 12, 2018, the ASPCA was called in to assist with evidence collection, transport and sheltering of 160 dogs from a breeding facility in Worth County, Iowa. Upon arriving at the scene, investigators discovered the dogs, all Samoyeds, living in frigid, overcrowded conditions without food. In addition, their water was frozen, leaving them without drinking water.

Tina came from a property in Iowa where dogs were kept in barn stalls with access to a filthy outside run. A few dogs were taken in by the local humane society shortly before the ASPCA arrived. Our girl and her siblings were in that group. She went to southern California and was the last of the 20 or so dogs transferred by the humane society to Samoyed rescues along the route. Three days later, we drove south to pick up our new family member, taking along our seven-year-old Samoyed, Shasta. On the way home, Tina was in a crate, quiet, trembling and slobbering in fear.

After nearly 40 years of sharing our lives with rescue dogs, we were not prepared for Tina. She was terrified of everything. In our yard, she stayed as far away from us as possible on a mound of dirt, avoiding the grass in the yard.

It was clear she needed time to get used to us and being in a home, rather than a barn with other dogs and no people. We figured out that she adored playing fetch. We still play fetch with her daily. We studied up on how to deal with a 13-month-old unsocialized dog. Her progress has been slow. She learned from our older Samoyed that riding in cars is great fun. Pretty early on, she was happy to go anywhere in the van. She loves to go away and stay in motels. She seems more at ease with us in a motel than at home.

We know we have been lucky. She has enjoyed exceptionally good health. Prior to adopting Tina, we were concerned about potential health issues with a dog coming from such a terrible place. She is now more used to us, although there are times when she looks at one of us and runs away in terror. Despite her fears, from day one, she has never once shown meanness or aggression. Now both of us are allowed to pet her, although always on her terms. We are very fond of Tina and look forward to many more years with this sweet natured gentle dog.

The owner of the property was found guilty of 14 counts of animal neglect and was sentenced to two years of unsupervised probation with 420 days in jail suspended. She is prohibited from owning and breeding any dogs.

Want to make a difference for dogs like Tina? Visit Barred From Love to find out how you can take a stand.