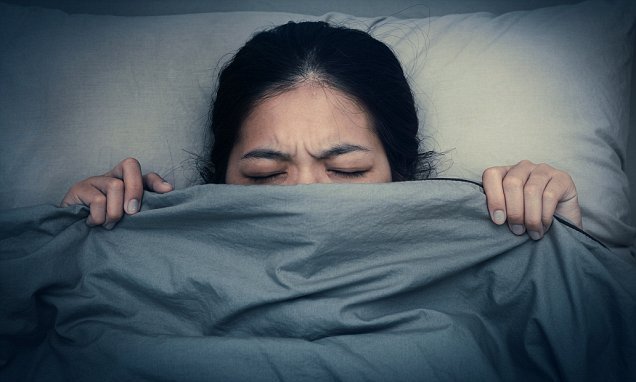 People who experience sleep paralysis or hallucinations just before they nod off are more likely to suffer from depression, study finds

People who experience sleep paralysis or hallucinations just before they nod off are more likely to suffer from depression, new research suggests.

Lead author Professor Michael Grandner, from the University of Arizona, said: ‘The degree to which people reported these [paralysis and hallucinations] symptoms predicted [the] severity of [their] depression symptoms.

‘[Paralysis and hallucinations] are often thought to be relatively harmless and quite rare. But they can be very distressing to those who experience them’.

Sleep paralysis is the temporary inability to move or speak upon waking, while hallucinations occur shortly before or after a person nods off.

Depression affects around 6.9 percent of adults in the US a year. Some 3.3 percent of people suffer annually in the UK. CAN INSOMNIA BE PSYCHOLOGICAL?

Insomnia may be psychological, research suggested in May 2017.

Sufferers who take placebo pills feel more rested than those who get no treatment at all, according to a review of 13 studies.

According to the researchers, the simple act of taking a pill may ease the anxiety that makes it harder for some insomnia sufferers to fall asleep.

Dr Patrick Finan from Johns Hopkins University, who was not involved in the study, said: ‘Insomnia is shaped by expectation and perception, so it is not surprising that placebos, which implicitly alter expectation, are effective in improving perceptions of sleep.’

The researchers, from the University of Sydney, examined data from a total of 566 insomnia sufferers who were assigned to either receive a placebo that they believed was an active treatment or no pills at all.

Placebo patients reported greater improvements in their ability to fall asleep, the total amount of rest they got and their sleep quality.

Comparing placebo against recognised insomnia therapies can give inaccurate results as simply believing you are receiving a sleep-inducing treatment can ease the condition.

Study author Dr Ben Colagiuri, said: ‘The comparison with no treatment means that we can be sure that the improvement we observed was due to a genuine placebo effect, rather than being an artifact of simply taking part in a trial.’

Insomnia may be considered a condition of the mind due to one person averaging four hours sleep a night and feeling sufficiently rested, while another may get seven hours and feel the amount or quality of their shut eye is inadequate, Dr Finan explained.

The study’s participants completed a survey that asked them to rate statements such as  ‘when I am first awakening, I feel like I can’t move’ and ‘when falling asleep or waking up, I experience scary, dream-like images’ with ‘never’, ‘rarely’ or ‘often’.

Their mental health was assessed via the Centers for Epidemiological Studies Depression Scale.

Results further suggest 18 percent of the participants experience sleep paralysis occasionally, while seven percent do so at least once a week.

Some 24 percent have sleep hallucinations now and then, while 11 percent do so every every seven days.

Study author Serena Liu added: ‘The fact that [sleep paralysis and sleep hallucinations] are so common among student athletes suggests that this is a group with some significant sleep problems that should be evaluated and dealt with.’

This comes after research released last March suggested stopping exercise can worsen depression in as little as three days.

In a review of six studies assessing the impact of ceasing activity in sufferers of the mental-health condition, results imply their symptoms, such as a continuous low mood, appear almost immediately.

Study author Professor Bernhard Baune, from the University of Adelaide, said: ‘It is important that people understand the potential impact on their mental wellbeing when they suddenly cease regular exercise.’