It would be a bit shocking to see children and teenagers drinking espressos, yet it’s socially acceptable for young people to reach for energy drinks to give them a quick “boost”.

Unaffected by the economic crisis, energy drinks are the fastest growing sector of the soft drinks market. Between 2006 and 2012 consumption of energy drinks in the UK increased by 12.8% – from 235m to 475m litres.

These drinks are very popular with young people – despite coming with a warning (in small letters on the back) that they are “not recommended for children”. A survey conducted across 16 European countries found that young people between the ages of ten and 18 in the UK consume more energy drinks on average than young people in other countries – just over three litres a month, compared to around two litres in other places.

More than two-thirds of young people surveyed in the UK had consumed energy drinks in the past year. And 13% identified as high chronic consumers – drinking them four to five times a week or more. Research also suggests that these drinks are more popular with boys and young men.

What goes into energy drinks?

Energy drinks are usually non-alcoholic and contain ingredients known to have stimulant properties. They are marketed as a way to relieve fatigue and improve performance: “Red Bull gives you wings”.

They contain high levels of caffeine and sugar in combination with other ingredients, such as guarana, taurine, vitamins, minerals or herbal substances. A 500ml can of energy drink for example, can contain 20 teaspoons of sugar and the same amount of caffeine as two cups of coffee.

Caffeine stimulates the central and peripheral nervous system. Consumed in larger doses, it can cause anxiety, agitation, sleeplessness, gastrointestinal problems and heart arrhythmias.

In the UK, there are no clear recommendations for caffeine intake for adults or children, although both the Food Standards Agency and the British Soft Drinks Association recommend that children should only consume caffeine in “moderation” and that caffeine content over [150mg/l] should be declared on the packaging. The current scientific consensus is that [less than 2.5 mg a day] in children and adolescents is not associated with adverse effects.

Should we be worried?

The evidence indicates that these drinks do not give you wings – or any other positive benefits. In fact their intake in young people, is associated with adverse health outcomes. There is growing evidence of the harmful effects of these drinks. Teachers are concerned about the detrimental impact these drinks have on pupils in their classrooms. There is also a known association between soft drink intake, dental erosion and obesity. 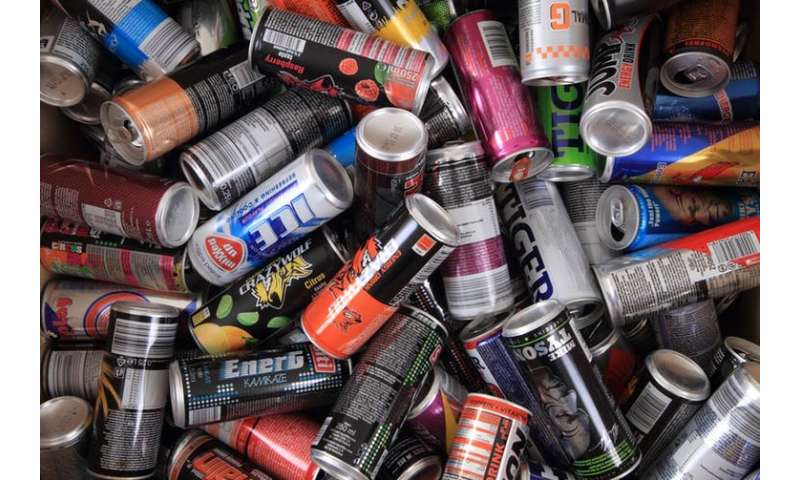 Lesser known are the effects of the cocktail of stimulant ingredients – such as guarana and taurine – contained within these drinks.

Our recent review of the scientific literature set out to look for any evidence of associations between children and young people’s consumption of energy drinks and their health and well-being – as well as their social, behavioural or educational outcomes.

We found that for young people, drinking energy drinks is associated with a range of adverse outcomes and risky behaviours. They are strongly and positively associated with higher rates of smoking, alcohol and other substance use – and linked to physical health symptoms such as headaches, stomach aches, hyperactivity and insomnia.

Why do young people buy them?

We also spoke with young people about their intake of these drinks. Discussions with our participants aged between ten and 14 indicated just how accessible and available these drinks are. They are also cheap – in some cases significantly cheaper than other soft drinks, as one of the girls we spoke to explained: “I think it’s because like a normal can of Coke is like 70p, and [own brand energy drinks] are like 35p.”

Our research found that energy drinks are often marketed on gaming sites and linked to sports and an athletic lifestyle – and are particularly aimed at boys. Taste, price, promotion, ease of access and peer influences were all identified as key factors in young people’s consumption choices.

Speaking with parents and teachers about these drinks there was confusion. Parents themselves identified the need for more information about energy drinks – and many admitted to not being fully aware of the contents and potential harmful effects on children.

Should they be banned?

Recently there has been a move to restrict the sales of these drinks to under 16’s – an approach which has also been taken by other countries. This saw the self-imposed sales restriction by many larger retailers – including most supermarkets – to not sell to children under 16. But many places still continue to sell to young people – including convenience stores, which offer a wide range of brands, flavours and package sizes.

The Commons Science and Technology Committee’s enquiry into energy drinks called for submissions in April 2018 and will be reviewing in June 2018 – when we will also give oral evidence.