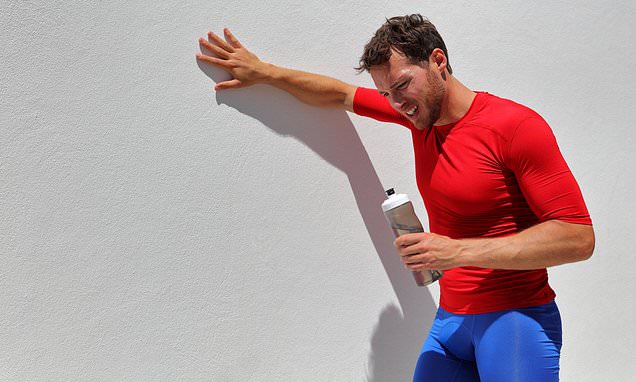 A runner could have died after he ruptured his oesophagus when he vomited during a 100-mile race.

The 37-year-old felt intense pain in his stomach and chest, and was struggling to breathe at the race in California.

First-aiders at the event initially worried the man was suffering a heart attack, and he was rushed to hospital.

Doctors ran X-rays, finding the force of his vomiting had caused his oesophagus to burst open, known as Boerhaave’s syndrome.

The condition is extremely rare, affecting only around three in a million people, and can be deadly within hours, killing around a third of patients who have it. 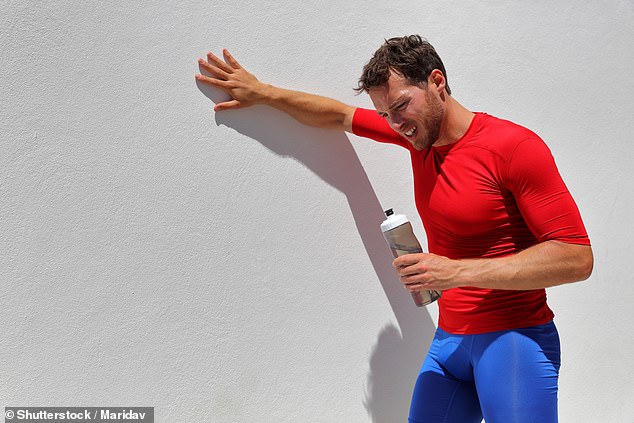 A 37-year-old runner could have died after rupturing his oesophagus after he vomited during a 100-mile race. Stock photo

The man, who has not been identified, said: ‘The oesophageal rupture I experienced during the Western States endurance run was a scary situation for me.

‘The whole experience gave me a new perspective on life and the importance of health, and I have learnt to appreciate the little things in life.’

Doctors, writing in the medical journal BMJ Case Reports, said they had not come across a case of Boerhaave’s syndrome in an athlete before.

Dr Andrew Pasternak, at Silver Sage Center for Family Medicine, Nevada, wrote: ‘While up to 96 per cent of ultrarunners will have some gastrointestinal distress during a race, we have not seen this complication described in the literature.

‘Only five per cent of patients with Boerhaave’s syndrome are considered to be healthy.’

The man took an anti-inflammatory pill not long after the race started, but before swallowing, he felt an intense need to vomit.

While he was vomiting, the man feared he may have broken a rib due to the severe pain he was in.

He went to a station on the trail seeking help, where he claimed to have ‘profound’ difficulty breathing.

Doctors ran x-rays, finding that the force of his vomiting had caused his oesophagus to burst open, known as Boerhaave’s syndrome. Pictured, the X-ray

Around three people in every one million ruture their oesophagus, according to a study in Icelend.

Of those patients, only 24 per cent were categorised as spontaneous.

Spontaneous oesophageal ruptures occur more frequently in men than women and typically affect those aged 40–60 years who overindulge in alcohol and food.

It typically occurs after forcefully vomiting due to the sheer pressure.

The tear in the oesophagus can lead to free fluid and air leaking into the chest cavity and organs.

Severe complications include dehydration, infections, which can lead to sepsis, fluid on the lungs, a collapsed lung or cardiac arrest.

Symptoms often revolve around a high fever, shortness of breath, and shock.

Boerhaave’s syndrome can be difficult to diagnose because there are no classic symptoms and it can be confused for things such as cardiac arrest.

The syndrome was first described in 1724 by Hermann Boerhaave, professor of medicine at Leiden University.

He wrote about the case of Baron Jan van Wassenaer, a grand admiral of the Holland fleet, who after a feast, vomited and developed a severe left sided chest pain. He was dead within 24 hours.

He was holding his side and complaining of severe pain in the left side of his chest, and lying down made it worse.

The man said: ‘After I vomited, I felt an intense pain in my abdominal area and breathing was very difficult.

‘I thought perhaps I was “winded” temporarily, but my breathing did not improve.

‘When I was in the first ambulance, the paramedic treated me as if I was having a heart attack.

‘I did not realise the seriousness of my situation until I saw the look of concern in the radiologist’s eyes after the contrast X-ray revealed the rupture.’

An ECG showed there was nothing wrong with the man’s heart.

But a chest X-ray showed a large part of his lung had fluid inside and gas had escaped into his chest and neck.

About 12 hours after he was admitted to hospital, doctors discovered the rupture in his oesophagus.

Medically known as Boerhaave’s syndrome, it’s normally seen in men aged 40 to 60 who have drunk too much alcohol or overindulged in food.

Forceful vomiting is a potential cause of the deadly injury, as well as the strain of weightlifting or childbirth, or swallowing corrosive chemicals.

Mortality rates for Boerhaave’s syndrome can be as high as 80 per cent, the doctors wrote, but this is decreasing because people are being diagnosed and treated quicker.

Boerhaave’s syndrome develops only around three times per every one million people per year and it kills between 30 and 40 per cent of patients, on average.

The risk of death doubles if treatment is delayed after 24 hours, and 12 hours had already passed before the man was diagnosed.

The only option for the man was to have surgery, which mainly focuses on stopping leakage by sealing the tears in the oesophagus.

He said: ‘For several days after my surgery, I felt very dehydrated and was desperately craving a glass of water.

‘But I finally felt hydrated again five days post-surgery and began the road to recovery.

‘I ended up spending a total of 41 days in three hospitals and over 30 days being fed through a J-tube.

‘I had to learn to breathe again, walk again, and after 70 days I was able to start running again.’