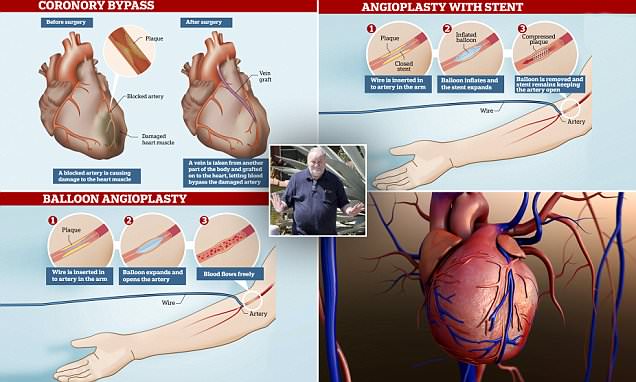 Revealed: The 4 procedures Meghan Markle’s father could undergo following his heart attack and why they will prevent him from giving his daughter away Meghan Markle’s father has confirmed he will not attend her wedding to Prince Harry in three days time after suffering a heart attack last week.

Thomas Markle, 73, is due to have an operation at 3.30pm UK time today to ‘go in and clear blockage, repair damage, and put a stent where it is needed’, he is reported to have said.

It is unclear where Mr Markle, who lives in Mexico, will have the procedure, however, heart attacks are treated using the same procedures throughout North America and in the UK.

Despite Meghan reportedly working hard to convince her father to walk her down the aisle, the retired lighting director is not expected to be in a fit enough state to travel across the Atlantic to Windsor after a major operation.

Mr Markle claims his heart attack was triggered by an open letter his son Thomas Jr wrote to Prince Harry saying marrying Meghan would be the ‘biggest mistake in royal wedding history’.

Although it is unclear exactly what his surgery will involve, the MailOnline has rounded up the most common heart-attack operations and when Mr Markle may be able to congratulate his newly-married daughter in person. Meghan, pictured with Harry on April 25, pleaded with her father to walk her down the aisle. However, after suffering a heart attack last week, he will not be well enough to attend

An angioplasty involves making a small incision in a patient’s arm or leg, through which a wire with an attached deflated balloon is thread through up to the coronary arteries.

The balloon is then inflated to widen areas where blood flow to the heart muscle has been reduced or cut off by plaque build up.

In some cases wires with laser tips are inserted to break up plaque. The balloon may also have a sharp rotating edge to cut away cholesterol build up.

This reduces chest pain and allows people to exercise if they were left immobile by their angina.

How long is the recovery? And what are the risks?

For patients being treated for chest pain, most are usually able to go home the same day of the operation. They should avoid strenuous activities and driving for at least a a week.

Heart-attack patients may need to stay in hospital for several days after their angioplasties.

Angioplasties are considered relatively non-invasive due to them only requiring a small incision in the arm or leg. The procedure generally lasts between 30 minutes and one hour.

Risks depending on people’s age and overall health but may include excessive bleeding, heart attacks and stroke. An angioplasty involves inserting a wire with an attached deflated balloon through an artery in a patient’s arm, which is then thread up to the heart. The balloon expands and opens the artery

A stent is a wire mesh tube that props open arteries during an angioplasty.

It surrounds the deflated balloon and expands with it when the balloon is inflated.

After the balloon has been deflated and removed, the stent stays in the artery permanently.

The recovery process and risks are the same as they are for angioplasties. Stent placements are inserted in the same way as angioplasties but involve a wire mesh around the balloon. Once the balloon is removed, the stent remains to keep the artery open

Bypass surgery involves taking arteries or veins from other parts of the body and using them to reroute blood around the clogged artery.

Depending on how narrowed people’s arteries are, some patients may require several bypass grafts.

In some cases, small incisions are made in the chest, through which arteries or veins from the leg are attached to the heart.

This requires the heart to be stopped, with blood being pumped through an oxygenator, which is also known as a ‘heart-lung’ machine.

Bypasses are one of the most effective ways to restore blocked blood supplies to the heart.

As well as improving blood and oxygen supplies to the organ, the procedure relieves chest pain, reduces the risk of a heart attack and often allows patients to be more mobile.

How long is the recovery?

Most patients need to stay in hospital for at least a week after having a coronary artery bypass.

Patients are generally able to sit in a chair after one day, walk after three and use stairs after six.

It takes around six weeks before people can resume their normal daily activities, such as working and driving, and three months before they make a full recovery.

What are the risks?

Up to one in every three patients will suffer an irregular or abnormally fast heart rate, which is usually not serious and treatable with medication.

Around one in 25 develop infections at the site of the incision on the chest, arms or legs.

Reduced kidney function affects less than one in 20, which is typically just temporary and resolves within a few weeks.

Brain-related problems may also occur, which can affect people’s abilities to concentrate. Although this can be permanent, it usually improves after a few months.

Due to the heart and coronary arteries being vulnerable after a bypass, up to 10 per cent of patients suffer a heart attack within 30 days of the surgery.

Risks depend on a patient’s age, overall health, weight and the number of vessels grafted. Bypass surgery involves taking arteries or veins from other parts of the body and using them to reroute blood around the clogged artery. Some patients may require several grafts

Heart transplants involve removing diseased organs and replacing them with a healthy donated heart from someone who has recently died.

They are considered in patients with severe heart failure who have not responded to medication.

This may include those with coronary heart disease, birth defects that affect the heart or abnormally large or shaped hearts that have become stiff.

Heart transplants involve a cut being made in the middle of the chest while a patient is under general anaesthetic.

Once the diseased heart is removed, the donor organ is connected to the main arteries and veins, and should begin beating normally. It is held in place by a series of stitches, which are known as sutures.

Such procedures have been proven to restore heart health in patients with irreversible damage.

Heart transplant can be life saving in patients whose organs no longer worked efficiently.

How long is the recovery?

Most patients stay in hospital for between two and three weeks after a heart transplant.

It can take several months before they can return to their normal activities.

Patients are required to take immune-system suppressing drugs for the rest of their lives to reduce the risk of their bodies rejecting the donated organ.

What are the risks?

One of the most common complications is the donor heart being rejected, which occurs when the immune system recognises the organ as foreign and attacks it.

Taking immunosuppressants to reduce the risk of rejection can cause side effects such as infections, weight gain and high blood pressure.

In up to 10 per cent of surgeries, the heart transplant does not work properly, which can be lift threatening and requires medications, ventilators and bypass machines to keep circulation going.

If the donated heart’s function does not improve, a second transplant may be required.

Narrowed and hardened arteries are common after a heart transplant. They tend to occur several years after the operation.

These can restrict the heart’s blood supply, leading to attacks and even failure. Medications can prevent this. Heart transplants involve removing diseased organs and replacing them with a healthy donated heart from someone who has recently died. This is done in severe heart failure