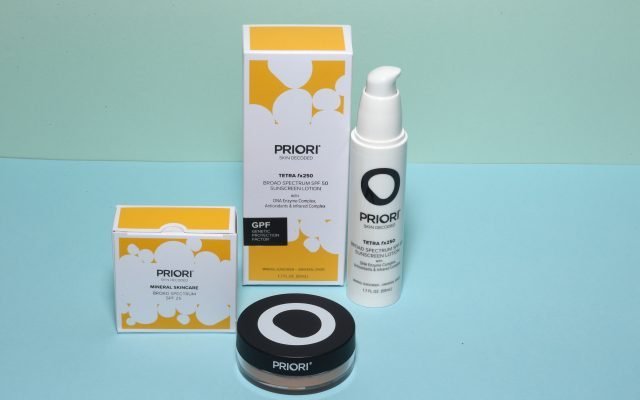 This week, science-driven, antiaging skin-care line Priori is introducing Tetra, what it says is the first four-level sun protection product.Priori Skincare said the proprietary four levels of protection shield the skin from the environment, and that its adaptive technology provides what it says are “Genetic Protection Factor” benefits. Further, the formula, which can be used by men and women, has been clinically shown to block 43 percent of harmful high energy, visible blue light from everyday electronics, according to the company.The levels include: broad spectrum mineral SPF 50 comprised of zinc oxide and titanium dioxide; DNA enzyme complex consisting of microbe plus blue-green algae, along with mustard seed extracts; a high intensity radiation complex that includes carnosine, soliberine and sepia melanin, and an antioxidant complex of superoxide dismutase plus ergothioneine. The new sunscreen is complementary to the brand’s mineral skin-care line, which offers three layers of protection.A white paper on infrared A radiation effects on the skin, written by Peter Schroeder and Jean Krutmann in 2010, was the initial thesis relied upon for the need to include IR protection. White papers from 10 years ago also served as the scientific basis for some of its other products, such as its DNA recovery product, according to Priori president Regis Haberkorn. While Priori is not the first to include IR protection — IR is a component in Coola, Farmacy and Cindy Crawford’s Meaningful Beauty — the price point of Priori’s new product is much higher.The 1.7 fluid ounce bottle is priced at $90. The Priori line is mostly sold at medi-spas and other professional channels, but can also be bought at the company’s web site and on Amazon. Most of the product line averages in the $60 range, although the higher-end superceutical formulas start in the $90 range and can go as high as $129 for the brightening serum. That puts the line in position for targeting the luxury marketplace, Habekorn said.The president said the brand is sold in 17 countries, and he’s in discussions with national retailers about carrying the line.“Depending on how quick we get traction in the U.S., we don’t need funding to expand,” the brand’s president said.According to the president, the skin-care line is adaptive to the needs of each individual because the “skin pulls out what it needs.” This is how a formulation in a product can serve multiple solutions, he explained.Priori posted about $7 million in revenues in 2016. It was founded by Joe Lewis and Joe DiNardo in 2005. Elizabeth Arden owned the brand since 2014, but Lewis bought the brand from Revlon after the cosmetic firm’s acquisition of Arden. He sold the brand earlier this year to SkinSciPac, a holding company formed by a group of beauty industry veterans.Haberkorn is the former chief operating officer of the brand and former president of Babo Botanicals, as well as a partner in SkinSciPac. He is also an investor in the business.Since the SkinSciPac acquisition, the new team has focused on repackaging the 21-stockkeeping unit line, tweaked the components of some of the products and worked on reformulating other products in the line. The lab is based in Virginia.