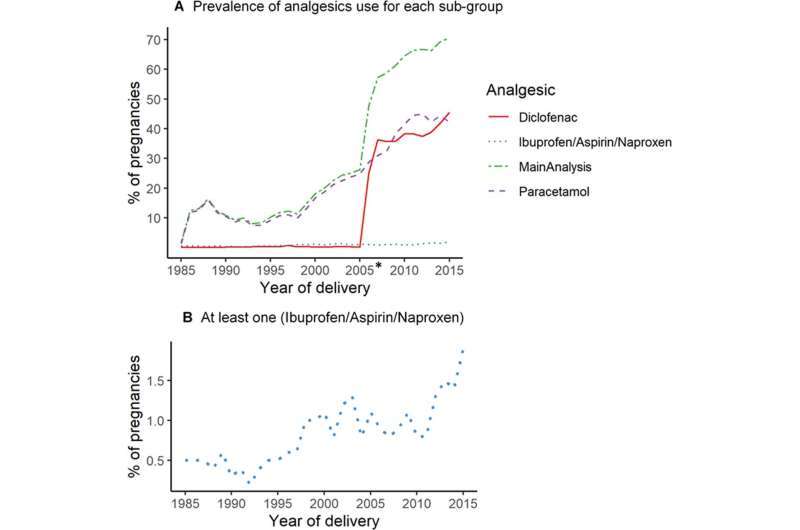 Researchers have called for medical advice about the use of painkillers during pregnancy to be reassessed after a new study found that pregnant women who use over-the-counter analgesics are about one and a half times more likely to have a baby with health issues.

The new University of Aberdeen study, one of the largest of its kind, has been published in BMJ Open.

The study found the risk of a preterm delivery, stillbirth or neonatal death, physical defects and other problems are all higher compared with the offspring of mothers who did not take drugs including paracetamol and ibuprofen.

Between 30% and 80% of women globally use non-prescription painkillers in pregnancy to relieve pain. This includes for common pregnancy symptoms, flu, fever, inflammatory or rheumatological conditions. However, current evidence regarding safety of use during pregnancy varies widely, with some drugs considered safe and others not.

The study analyzed data from more than 151,000 pregnancies over 30 years (1985–2015) from the Aberdeen Maternity and Neonatal Databank. The study looked at medical notes for non-prescribed maternal consumption of five common painkillers—paracetamol, aspirin, and non-steroidal anti-inflammatory drugs (NSAIDs), diclofenac, naproxen and ibuprofen—either as single compounds or in combinations.

Overall, nearly three in ten (29%) women have taken over-the-counter analgesics during pregnancy, a figure which more than doubled to 60% during the last seven years of the 30-year study period. This suggests use is growing rapidly.

When asked specifically at their first antenatal clinic visit, as opposed to later in pregnancy or after labor, more than four in five (84%) of women using painkillers reported use during the first 12 weeks after conception. However, the duration and dose of use and medical reason for use were not recorded.

Nevertheless, given that up to 60% of women reported using over the counter analgesics, they could not all have underlying medical conditions that would cause the increased risks seen in this study.

The findings show an association between increased health risks for pregnancies, where mothers were exposed to at least one of the five painkillers. The risks, include:

First author of the paper, Aikaterini Zafeiri of the University of Aberdeen said: “In light of the study findings, the ease of access to non-prescription painkillers, in combination with availability of mis-information as well as correct information through the internet, raises safety concerns.

“This is especially when mis-informed or partially-informed self-medication decisions are taken during pregnancy without medical advice.