Macrophages are white blood cells involved in a variety of biological functions, from destroying infectious pathogens to repairing damaged tissue. To carry out their different roles, macrophages must first be activated and transformed into different subtypes. However, the mechanisms that lead to macrophage activation are not fully understood.

Now, researchers at Osaka University have identified a new player that activates macrophages and allows them to take on a protective role against inflammatory disorders such as sepsis and inflammatory bowel disease (IBD). They recently published their results in Nature Immunology.

Activated macrophages are traditionally classified as either pro- (M1) or anti- (M2) inflammatory macrophages. The M1 type are part of the inflammatory response that kills invading organisms. M2-type macrophages, by contrast, have anti-inflammatory properties and are thought to protect against inflammatory disorders such as sepsis and IBD. The researchers were interested in understanding precisely what drives macrophages to form the M2 type.

“M1 and M2 macrophages have different energy needs, so macrophages need to be able to sense and respond to nutrients in their surroundings as part of the activation process,” study lead author Sujin Kang explains. “We already knew that macrophages altered their metabolism when they differentiated to the M2 subtype, but we didn’t understand exactly how this metabolic reprogramming worked.” 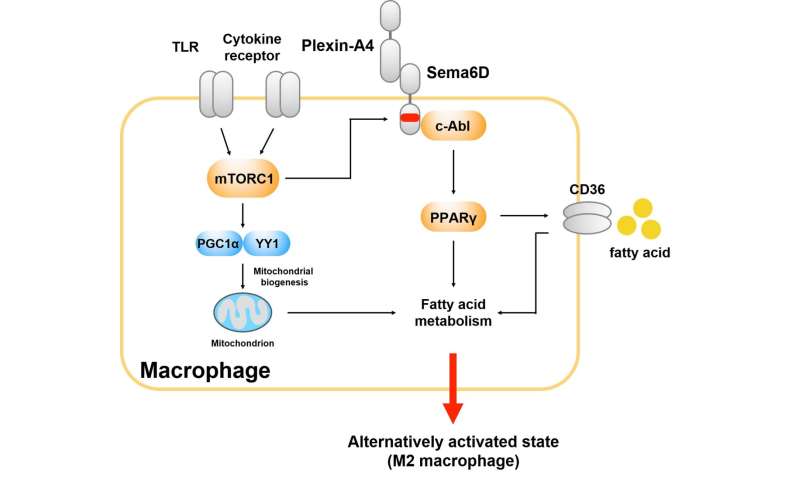 To gain insight into how M2 macrophages meet their energy demands, the researchers focused on a signaling pathway called mTOR, which is involved in cell metabolism and known to drive macrophages to the M2 type. They used a chemical inhibitor to shut down the activity of the mTOR protein, allowing them to see how other players in the pathway were affected.

To their surprise, the team’s search led them to Sema6D, a protein known primarily for its role in guiding neurons during nervous system development. When the team genetically removed Sema6D from macrophages, however, the cells could no longer efficiently take up fatty acids from their environment—a key energy source for M2 macrophages. Without this fatty energy, the macrophages were unable to complete their transformation to the M2 type.

“Once we found we could block M2 differentiation, we wanted to see how this impacted the protective role of macrophages in chronic inflammatory diseases,” Kang adds. “Using a model that mimics colitis, we found that mice lacking Sema6D have much more severe symptoms. Sema6D-deficient mice have significantly less body weight, a shorter colon, severe infiltration of inflammatory cells, and extensive damage to the cells lining the colon.”

The findings have potentially important clinical implications, as they provide a new potential therapeutic target for the treatment of inflammatory diseases such as IBD .