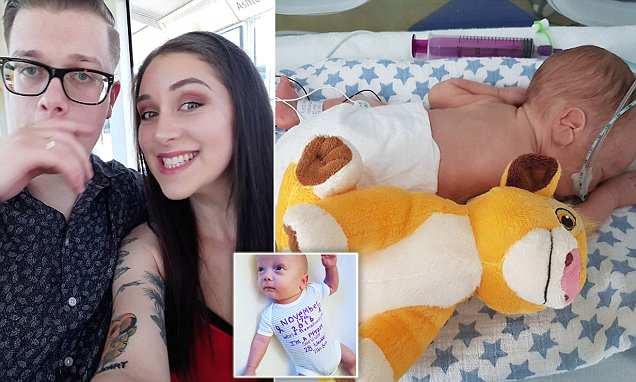 Mother, 27, whose waters broke at just 18 weeks, claims she saved her baby by drinking 15 PINTS of water a day to create more amniotic fluid in her womb for her son

A mother claims she saved her premature baby – by drinking 15 pints of water a day.

Cally Hibbert, of Ashton-under-Lyne, was told her son had a one per cent chance of survival when her waters broke at just 18 weeks.

Doctors feared she had lost too much of the protective fluid from her womb – and would almost certainly endure a fifth miscarriage.

But after stumbling across a Facebook support group, Ms Hibbert, 27, was given hope by reading the touching stories of other mothers in similar situations.

She began to drink 15 pints of water daily – seven times more than is recommended – to create more amniotic fluid in her womb for her son.

And 10 weeks later, Leo was born at the Royal Bolton Hospital. He weighed 1lb 10oz and so was kept in hospital for three months to help him thrive.

Now, branded a ‘little terror’ at times by his mother, Leo is healthier than ever and is approaching his second birthday.

Figures suggest just ten per cent of babies born after pre-term pre-labour rupture of the membranes, or PPROM, survive. She was told her son, Leo, had a one per cent chance of survival when her waters broke at just 18 weeks. After being born weighing 1lb 10oz, the infant was kept in hospital for three months Pictured at 28 weeks old, Leo is now healthy and is approaching his second birthday

‘Leo is our real-life water baby’

Speaking about her ordeal in 2016 for the first time, Mrs Hibbert, who has two other children, told The Sun: ‘Leo is our real-life water baby.

‘I’m sure the water I drank saved him by helping to protect him until he was strong enough to be born. I couldn’t terminate when his heart was beating.’

Mrs Hibbert avoided taking photos of her bump during her pregnancy with Leo, as she feared it would tempt fate.

She had already suffered four miscarriages in the past – and became worried when she started bleeding just weeks into her pregnancy.

But at 16 weeks, the bouts of bleeding stopped, according to The Sun. Her waters broke two weeks later while she was folding washing at home.

When a pregnant woman’s waters break, it is usually a sign that the unborn baby is ready to enter the world.

Most women go into labour within hours when this happens. But Mrs Hibbert, who already has Oliver, nine and Holly, five, did not experience an early labour.

A consultant told Mrs Hibbert and her partner Jason Clark, 26, they should prepare for a miscarriage as the small amount of fluid left was not enough for him to survive.

The couple ‘clung to each other and cried’ as they were given the news their baby would soon be gone – even though she could still feel him moving. Although the bleeding stopped, her waters broke while she was folding laundry at home Facing the prospect of losing their baby, the couple ‘clung to each other and cried’

Pre-term pre-labour rupture of the membranes happens in expectant mothers who are less than 37 weeks pregnant.

Most women will go into spontaneous labour within 24 hours of rupturing their membranes.

But six per cent of women do not go into labour within 96 hours.

The earlier into the pregnancy the rupture occurs, the less likely it is that the onset of labour will be within a specified time period.

The condition is associated with 40 per cent of preterm deliveries and can lead to high morbidity and mortality.

An expectant mother may describe feeling a ‘popping sensation’ of a ‘gush’ with continuous watery liquid draining.

A woman will be taken into hospital immediately and admitted in many cases for the at least 48 hours.

In most cases delivery should be considered at 34 weeks.

It is recommended that women diagnosed with PPROM should not exceed 96 hours after their membrane has ruptured. The risk of maternal and fetal infection increases the longer the time between membrane rupture and the onset of labour.

‘Something so simple saved his life’

In an interview with The Sun, she said: ‘That’s when I desperately started researching and found the advice about the water.

‘It’s astonishing that doctors said there was nothing they could do, yet something so simple may have saved his life.’

She read how other mothers in a similar position felt that drinking more water helped their babies survive through PPROM.

The couple scoured the internet and discovered drinking more has been shown to replenish lost amniotic fluid – the liquid the baby needs to grow in the womb.

Leo was finally born in July two years ago. He was kept at the Royal Bolton Hospital until a week before his due date in October.

A spokesperson for Little Heartbeats previously said: ‘Many of our Mum’s believe drinking water to replenish their amniotic fluid levels have helped.

‘Many other countries, such as the US, do recommend that mum’s increase their water consumption.’

British doctors do not advise pregnant women whose waters break early to drink more fluid as they say there is little research to claim it works.

However, in common with other websites, the US Mayo Clinic states treatment for low amniotic fluid (oligohydramnios) can include drinking more fluids to maintain a healthy level.

It is possible to temporarily increase the amount of amniotic fluid with a procedure known as amnioinfusion, in which saline is instilled into the amniotic sac. Despite his difficult start in life, her ‘little terror’ Leo is now at home and thriving