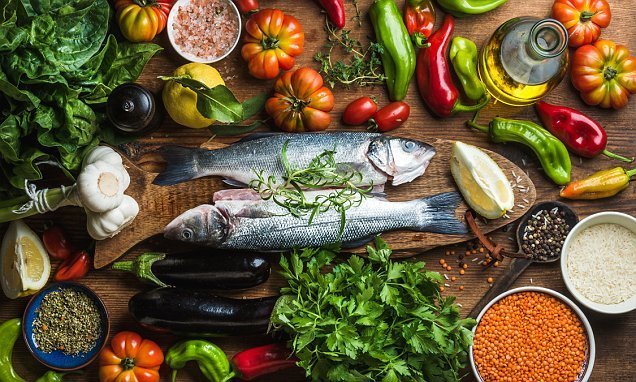 Adopting a Mediterranean or Nordic-style diet could slash rates of cancer, diabetes and heart disease, a major review states.

The World Health Organization today pointed to the health benefits of both diets, which are low in dairy, sweets and red and processed meats.

The UN agency trawled through an array of scientific journals and other medical literature to unearth the evidence, in light of an obesity ’emergency’.

However, after analysing policies in 53 European countries, it warned less than a third are promoting either of the healthy diets, which the WHO said could save health systems money.

Vegetables, fish, nuts and olive oil are staples of the Med diet, while the Nordic diet incorporates more berries and pulses and instead revolves around rapeseed oil. Eating more fish, vegetables, grains and oils – as people traditionally do in Mediterranean and Scandinavian countries – can have many benefits including better heart and brain health

João Breda, of the WHO’s office for prevention and control of noncommunicable diseases in Europe, called for more countries to adopt the diets.

He told The Guardian: ‘Both of these diets are really good in terms of impact on health. That is not in doubt.

‘We wanted to know whether countries were using them to inform healthy eating policies.’

Who followed the diets?

An array of evidence has already proven the benefits of following a Mediterranean diet, from boosting heart health to delaying dementia.

WHAT IS THE NORDIC DIET?

WHAT IS THE MED DIET?

And scientists are beginning to unearth similar benefits in adopting a Nordic diet, with studies having found it can keep the brain healthy.

The WHO’s report said diet is a key risk factor in noncommunicable diseases, such as cancer, heart disease including stroke, chronic lung conditions, and diabetes.

Noncommunicable diseases – ones which are not passed between people – are the leading cause of death worldwide, killing around 40 million people per year.

The four main diseases are all linked to obesity, which is often caused by a poor diet. A third of people across the world are overweight, according to estimates.

‘We have an emergency here’

Mr Breda added: ‘All countries need to do more in terms of promoting good diets, because we have an emergency here.

‘We are not recommending any particular diet, but when countries think about the improvements they want to make, they might be inspired by these diets.

‘If you adopt them, you save the health system money. There are lots of advantages.’

Obesity in the UK

A report published in November last year showed that more than a quarter of people in the UK are obese.

The World Obesity Forum estimated that the crisis could cost the UK £22 billion per year by 2025.

Obesity-related conditions, such as diabetes, cost the cash-strapped NHS more than a £1 billion each year already – around a tenth of its budget.

WHAT ARE THE MOST IMPORTANT ASPECTS OF THE MEDITERRANEAN DIET?

Consuming more fruit and fish, and less fizzy drinks, are the most important aspects of a Mediterranean diet, research suggested in July 2017.

Individually, each dietary change reduces a person’s risk of developing pre-cancerous colorectal polyps by more than 30 per cent, according to researchers from Tel-Aviv Medical Center.

Making all three healthy choices lowers the risk of such lesions by up to 86 per cent, they add.

The results further suggested eating just two or three foods typical of a Mediterranean diet – such as opting for olive oil over butter – halves the risk of developing such polyps.

Colorectal cancer is associated with a low-fibre diet with large amounts of red meat, alcohol and high-calorie foods.

The researchers analysed the dietary questionnaires of 808 people undergoing screening or diagnostic colonoscopies.

All of the participants were aged between 40 and 70 years old, and did not have a high risk of developing colorectal, or bowel, cancer.

A Mediterranean diet was defined as consuming above average amounts of fruits, vegetables, legumes, nuts, seeds, whole grains, fish and meat, as well as a high ratio of monounsaturated fats, such as olive oil, to saturated fats, like butter.

The diet also involves a below average consumption of red meat, alcohol and high-calorie foods.