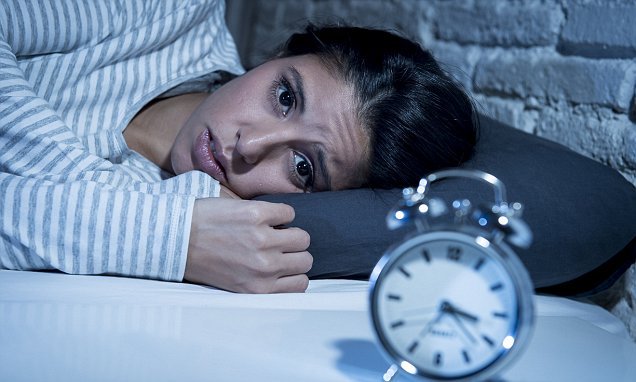 Getting less than six hours sleep raises people’s risk of depression by up to 80%, study finds

Getting just six hours, or less, sleep a night raises people’s risk of depression by up to 80 percent, new research suggests.

Having just one hour under the recommended seven hours of shut eye a night also increases people’s risk of feeling nervous, helpless or restless by between 60 and 80 percent, a US study found.

Women are particularly sensitive to the effects of insomnia, which the researchers believe may be due to their hormones making them more at risk of depression anyway.

Research released earlier this year by Binghamton University suggested insomniacs are less able to overcome negative thoughts or disengage from upsetting emotions than those who get sufficient shut eye.

Up to 25 percent of adults in the US struggle to sleep, while around seven percent suffer from depression every year.

The National Sleep Foundation recommends people get between seven and nine hours shut eye a night. Contrary to popular belief, contraceptive pills, implants or injections do not make women more likely to suffer from the mental-health condition, a study found.

‘Based on our findings, this side effect shouldn’t be a concern for most women, and they should feel comfortable knowing they’re making a safe choice.’

The researchers blame platforms such as social media for making contraception complications seem more common than they are.

Dr Worly said: ‘We live in a media-savvy age where if one or a few people have severe side effects, all of a sudden, that gets amplified to every single person.

‘The biggest misconception is that birth control leads to depression. For most patients that’s just not the case.’

The scientists add, however, certain women are at a greater risk of the mental-health disorder and should be monitored closely.

Dr Worly said: ‘Adolescents will sometimes have a higher risk of depression, not necessarily because of the medicine they’re taking, but because they have that risk to start with.

‘For those patients, it’s important that they have a good relationship with their healthcare provider so they can get the appropriate screening done – regardless of the medications they’re on.’

The researchers reviewed thousands of studies investigating the link between contraceptives and people’s mental health.

Such studies included various methods of contraception, including injections, implants and pills.

Participants in the trials were made up of teenagers, women with a history of depression and those who had given birth in the past six weeks.

The participants were asked how often in the past 30 days they felt nervous, helpless, restless, depressed or that their mental health was ‘not good’.

They also recorded the number of hours of sleep they get a day.

The findings were published in the journal Neurology, Psychiatry and Brain Research.

Following the so-called ‘DASH diet’ reduces people’s likelihood of developing the mental-health disorder by up to 11 percent, a study, by Rush University, Chicago, found.

Those who eat a typical Western diet, which is rich in processed foods and sugar, are more at risk of suffering depression, the research adds.

Researchers add further studies are required to determine the association between diet and mental health, but add simple lifestyle changes may be preferred over medication to control such conditions.

It is low in processed foods, sugary drinks, salt and red meat.

As well as being linked to better mental health, DASH is also promoted by the National Heart, Lung, and Blood Institute to prevent and control hypertension.