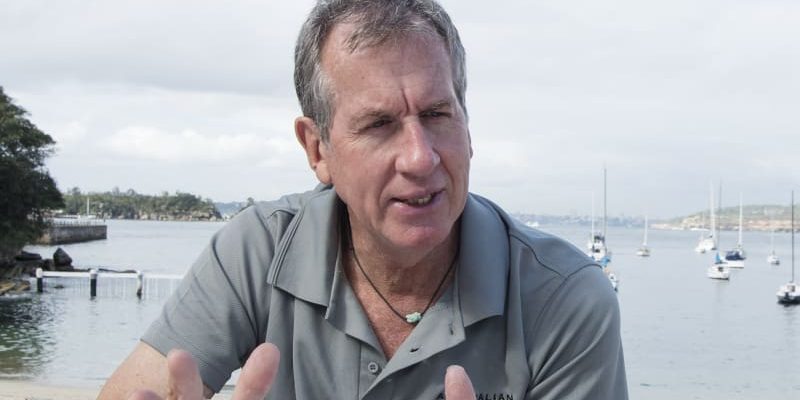 “I can’t look at people on the beach in the same way anymore,” Simon Balderstone says, glancing at the smattering of Sydneysiders lucky enough to be here midweek on the sands of Little Manly Beach.

The shimmering bay is at its most seductive and bare limbs and torsos bake in the midday sun. But we sit resolutely beneath shade cloth as we wait for our order of battered flathead, fat chips and rocket salad to arrive from the beachside cafe. The sun has become the enemy since melanoma came galloping back into his life last October.

At the time Balderstone, 64, was as about as far away from an Australian beach as it was possible to get. He was leading a trekking party through a remote valley in the Lower Solukhumbu region of Nepal, south of Everest, showcasing the work of the Australian Himalayan Foundation, which he chairs and co-founded 15 years ago. 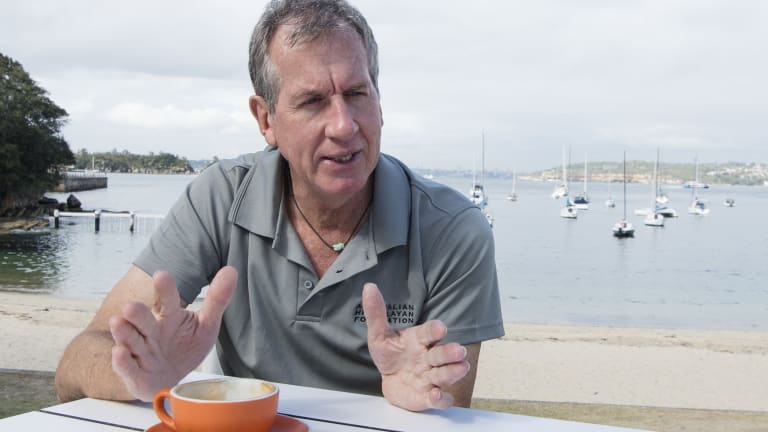 His trekking groups raise funds, via sponsors, for the foundation,  which in turn supports Nepalese schoolchildren in the poorest parts of the country, building and refurbishing classrooms, training local teachers and providing scholarships to the kids of local farmers whose families would otherwise have to send them out to work. So far the project has helped nearly 40,000 children, and it has become one of the great passions of Balderstone’s life.

But on day two of last October’s trek, he found himself in unaccountable agony after a two-hour jeep ride over heavily rutted roads. The group had just visited a school at Garma, where the foundation had rebuilt several classrooms destroyed by powerful earthquakes in 2015.

"We’d arrived during the Dashain national holiday," he recalls. "A lot of schools were closed but they held an ‘unlocking’ ceremony for the new classrooms, there were speeches, and a lot of dancing.”

By the next morning, his back had worsened. A tough day’s walking lay ahead, down slippery, steep slopes. By day five, the pain had made it impossible for him to keep going.

"I didn’t know what I had done," he says. "All I knew was that it was hurting like stink."

He flew to the CIWEC clinic in Kathmandu – a medical centre renowned among mountaineers – where scans revealed a compression fracture of the spine. But how he’d broken his back riding in a jeep remained a mystery.

The puzzle was solved once he was medevaced back to Sydney: stage four melanoma, which had metastasised to his spine and other bones.

The news was a shock. In 2016 doctors had previously diagnosed a small, colourless lump on his back as melanoma, but thought they'd caught it all with an operation to remove both the lump and the lymph glands down the left side of his body.

Looking back, Balderstone thinks many long days in the sun as a child, growing up with three siblings on farms in the western district of Victoria, may have given the cancer a head start.

“I loved that existence, just wandering around in the paddocks with my dogs or helping out on the farm,” he says. As a boarder through high school he would bring friends home in the holidays, so they could learn “which end of a sheep was which”.

From his parents, Bob and Judy, Balderstone absorbed a love of the land and the natural world and a healthy dose of egalitarianism. Bob eventually moved into cattle farming, developing a successful breed of Angus Shorthorn and becoming head of the Royal Melbourne Agricultural Show. But Balderstone says his father “never lost the ability to drink at both the top [graziers’] pub and the bottom [workers’] pub in Mortlake. He was one of the few who could do that, he got on with absolutely everyone.”

At university Balderstone took a year off to go rouseabouting with a shearing team through country Victoria and South Australia. After graduating he joined The Age newspaper in 1977, and soon moved to its Canberra bureau, where he began a lifelong friendship with Michael Gordon, later a towering figure in Australian journalism. 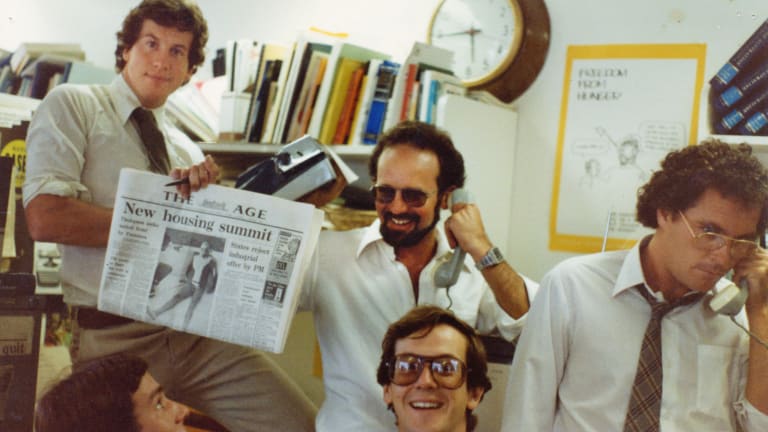 Simon Balderstone, back row left, with some of The Age’s Canberra bureau, including his great friend Michael Gordon, far right, in 1982.

Balderstone kept up his life of adventure on the side. In 1980, Christine Gee’s Australian Himalayan Expeditions made its debut and Balderstone eagerly signed up. During his holiday breaks he led treks into Kashmir and Nepal and by 1984 had befriended the men who would become some of Australia’s best-known mountaineers – Tim Macartney-Snape, Greg Mortimer and Lincoln Hall among them. 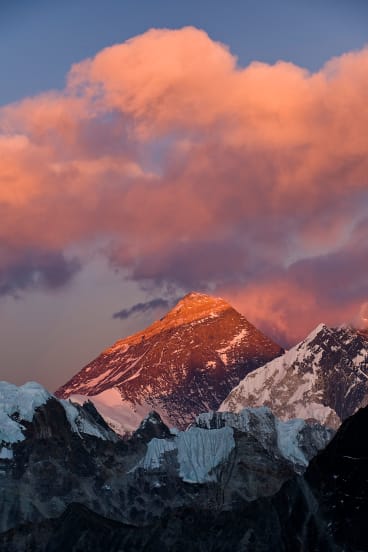 The friends Baldersone made on his first Everest climb became the core of the group with which he set up the foundation.

In 1984, at their invitation, he became the resident journalist for the first Australian party to scale Everest. "We were on the mountain for 68 days," Balderstone says. “I went to about 23,000 feet. We had a very small budget; in those days there was virtually no one on the mountain at any given time, but there was one American group on the other side. We used to go over from our base camp and say hello, because we knew we would get a good feed from them.”

Mortimer and Macartney-Snape reached the summit on that trip, but Hall had to turn back, as did Andi Henderson, who lost fingers on both hands to frostbite. (In 2006, Hall would make a second attempt at Everest and succeed, but nearly at the cost of his life: he was found disoriented by another expedition after he’d spent a night on the mountain without shelter, oxygen, food or water.)

“I can still remember whole days of that 1984 expedition very clearly,” Balderstone says. “The Himalayas are inspiring, magnificent; but it’s also one of the poorest regions in the world. We were all just trekkers and climbers who loved the Himalaya and its people and wanted to give something back.”

The “incredibly close lifetime friends” he made on the mountain became the core of the group with which he set up the foundation in 2003. Other founding members were Christine Gee, Peter Hillary (son of Sir Edmund Hillary) and Hall, who was followed onto the AHF board by his widow, Barbara, when Hall died of mesothelioma in 2012.

Balderstone, restless, found it hard to settle back into mainstream journalism after Everest. He wrote a book on Kakadu, then joined the Australian Conservation Foundation and helped drive its "Fight for the Forests" campaign which ran through the 1987 federal election and helped propel Bob Hawke to a third term as prime minister.

The campaign forged links between Balderstone and a senior adviser in Hawke’s office, Craig Emerson (later a cabinet minister under Julia Gillard), who recommended Balderstone to incoming environment minister Graham Richardson. “People either love or hate Richo, but in the late 1980s we were on a roll," Balderstone says. "We had so much happening: Kakadu, the Tassie forests, Shelburne Bay, the PM’s big environment statement. There were really big fights to be had and Graham was up for the fight.”

Balderstone later joined Hawke’s office, and then Paul Keating’s when Keating replaced Hawke: “Depending on whether you thought it was bastardry or dexterity, I was the only senior adviser to stay on in Paul’s office when he took over.”

Fate or fortune soon offered another opportunity. Balderstone was in Monte Carlo with the Keatings for the announcement that Sydney had won the 2000 Olympic Games. Not long afterwards, he moved into a senior position with the Sydney Organising Committee for the Olympic Games, and once that sporting carnival was over, built a consultancy business advising the International Olympic Committee. In 2011 he “crossed to the dark side, the bidding side” to advise Tokyo on its successful Olympics bid.

“I have been so lucky," he says. “The books I’ve been able to write, working for those three extremely effective federal politicians, Everest, the Olympic work, and now giving something back through AHF … Part of it was luck, but I was open to walking through doors.”

In 2007, he was made a member of the Order of Australia for services to the environment, the Olympic movement and Indigenous affairs.  Balderstone's long been involved with Aboriginal communities in the Northern Territory, and  sits on the board of the ITNewcom Foundation, which supports tertiary scholarhips for Indigenous students.

In February this year, Michael Gordon – “Micky” as Balderstone calls him – died suddenly during an ocean swim in Victoria. Gordon’s death was a hammer blow, coming so soon after his own cancer diagnosis. But he has grounds for hope.

Working with the Sydney-based Melanoma Institute, Balderstone is just one of 20 people worldwide trialling an immunotherapy treatment  which combines a new drug with the better-known Keytruda. His tumours are shrinking, and he has become pain free.

"It's early days," he says. "I do understand that a lot of people who are on Keytruda are cured, but a lot aren’t. I’ve got to be realistic about that while keeping my head together and my attitude positive. The cancer and Micky’s death has heightened my sense of mortality. I’m bringing a few plans forward, seizing the day.”

Some of those plans are personal – a walking holiday in Europe with his wife Jenny, a fellow government staffer in the Hawke years. His biggest ambitions are for the foundation. He hopes to lead another trek in December, alongside Peter Hillary and AHF supporters and donors.

“We are on track to have finished nearly 90 classrooms now. We’ve been involved with around 300 schools. We have smaller projects going in Bhutan and in northern India. We are providing what is needed most to those who need it most in that part of the Himalayas. And I’m pretty proud of that.”