After Hurricane Maria hit Puerto Rico in September of 2017, the Federal Emergency Management Agency (FEMA) began distributing emergency food. An analysis of 10 consecutive days of federal food aid delivered during the aftermath of Hurricane Maria reveals that much of this food exceeded the dietary limits for sodium, added sugars and saturated fats outlined in federal dietary guidelines.

“There is very little information on the types of emergency foods provided by federal response following disasters, probably because of the fast-paced nature of the response,” said Uriyoán Colón-Ramos, assistant professor, Milken Institute School of Public Health, George Washington University. “These foods are supposed to follow the Dietary Guidelines for Americans, but our results show that more work is needed to meet community nutritional needs and ensure the health of families during disasters.”

Colón-Ramos will present the new research at the American Society for Nutrition annual meeting, Nutrition 2018, held June 9-12, 2018 in Boston.

For the study, the researchers photographed emergency foods delivered in a FEMA distribution center in Barranquitas, Puerto Rico around six weeks after Hurricane Maria touched down. Using these pictures, they recorded and analyzed nutritional information for 107 unique food items.

The analysis revealed that almost 10 percent of the unique items were foods with very low nutritional value such as candies and chips. The team developed meal plans with the foods provided to see how people could eat these foods and still follow the food group recommendations outlined in the Dietary Guidelines for Americans. The analyses revealed that even when excluding candies and chips from the meal plans, people would not be able to follow the Dietary Guidelines for Americans without exceeding the upper limit for daily sodium, added sugars or saturated fats. 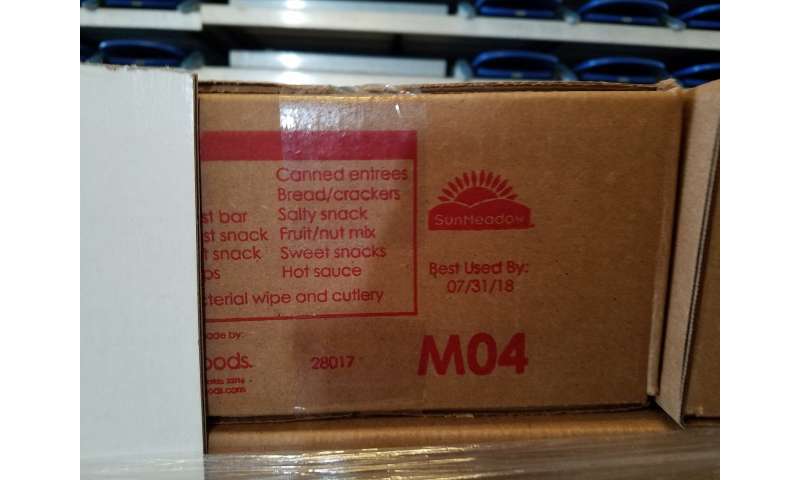 “In the US, obesity and obesity-related chronic diseases are a major health concern,” said Colón-Ramos. “Communities most at risk for obesity tend to be poorer and face other social and environmental barriers to their health. These communities may also find it more challenging to recover from personal and material loss after disasters. We hope that our findings bring more attention to the need for better programs aimed at protecting the health of these communities as they recuperate after disasters.”

Colón-Ramos points out that international humanitarian assistance programs have shown that there are ways to get around the challenges of delivering foods that meet nutritional guidelines in places that are remote and may lack refrigeration and power. In fact, some of the items analyzed in the new study were low-sodium and low-sugar shelf stable foods, but these were only a small proportion of the foods delivered.