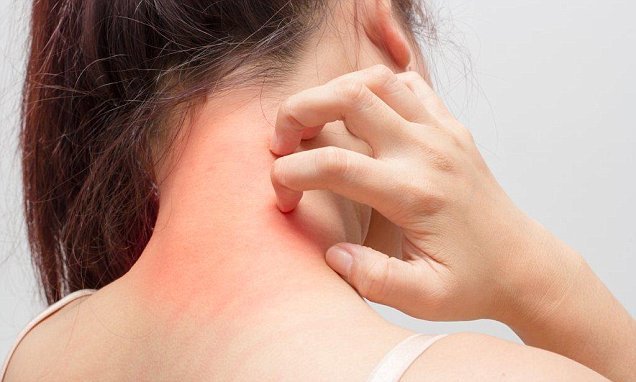 Eczema patients could be at higher risk of heart attacks and strokes, new research suggests

A major new study suggests a link between severe eczema in adults and a moderately increased risk of heart attacks, stroke and other cardiovascular problems.

Past research has provided conflicting results. The new study – the largest to date – bolsters the case for screening and treating eczema patients with a view to preventing heart attacks and strokes.

Given how common eczema is, even a small increase in risk would be important from a public health perspective, the authors argue in the study published in the British Medical Journal.

‘Targeting cardiovascular prevention strategies among these patients should be considered,’ they write. Eczema (also known as atopic eczema)  is an inflammatory condition that affects up to 10% of adults. The condition results in itchy, red and cracked skin. It usually starts in childhood with changing severity over the years.

The more severe the eczema, the higher the risk

An international research team led by Sinéad Langan at the London School of Hygiene & Tropical Medicine, wanted to investigate whether adults with atopic eczema are at an increased risk of cardiovascular disease and whether the risk varies by eczema severity and activity over time.

They analysed data from the UK’s Clinical Practice Research Datalink for over 385,000 adults (average age 43 years) with atopic eczema, matched with up to five patients of similar age and sex, but without eczema.

Patients were classified as having mild, moderate or severe atopic eczema and were monitored for an average of five years. Eczema is an inflammatory condition of the skin that leads to redness, blistering, oozing, scaling and thickening.

It usually appears in the first few months of life and affects around 10 per cent of babies.

Eczema’s cause is not fully understood but it is thought to be brought on by the skin’s barrier to the outside world not working properly, which allows irritants and allergy-inducing substances to enter.

It may be genetic due to the condition often running in families.

As well as their skin being affected, sufferers may experience insomnia and irritability.

Many factors can make eczema worse. These may include:

There is no cure for eczema, however, 70 per cent of childhood sufferers no longer have the condition in their teens.

Patients should avoid known triggers for flare ups and use emollients.

The risk was greater for patients with severe or more active eczema.

Severe eczema patients could be targeted for improved treatment

The research has limitations. It is an observational study, so no firm conclusions can be drawn about cause and effect. The authors also note that there could be possible misclassification of eczema severity. Nevertheless, the study was large and the authors were able to account for other potentially influential risk factors.

In a linked comment in the BMJ, John Ingram, consultant dermatologist at Cardiff University, says the findings may strengthen the argument for using expensive next generation biologic drugs to better control severe eczema. Exploring whether these eczema drugs reduce cardiovascular events in patients with severe eczema is the next important step, he says.