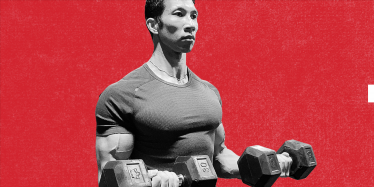 If you want bigger biceps, all you have to do is get down on your knees.

No, we don’t mean that you have to pray for them (as if you hadn’t already tried that); rather, doing your curls from a kneeling position forces you to perform them with better, stricter form. Using precise form and creating a better mental connection to the muscles you’re working is the surest way to build them up fast—it’s better than lifting heavy.

Try the tall-kneeling curl with a halfway pause, courtesy of Men’s Health fitness editor Ebenezer Samuel, C.S.C.S., creator of the New Rules of Muscle program (available on DVD and the new streaming All Out platform).

New Rule: Do Curls On Your Knees

“Most people don’t make a strong mind-muscle connection when they train,” says Samuel. They aren’t able to concentrate on the muscles they’re working, and that limits the amount of muscle they can activate. By curling from the knees and pausing, you reduce the tendency to sway your back and swing the weights up, as you might do when standing, and you perform a stricter set that really makes you focus on the biceps.

Why not just sit on a bench and a curl? That works too, but Samuel says most of us do enough sitting as it is; the kneeling position makes you practice good posture, and requires more effort from your core. “Everything we do in the New Rules workouts starts at the core to offset the weakness that sitting at desks has caused,” says Samuel.

You won’t be able to go as heavy doing kneeling curls as you would pumping out reps standing (where we all tend to use a little body English), but that doesn’t matter, as your muscles will be working harder—lifting the weight with their own might, not the assistance of momentum. “My goal is for people who try this to ‘think’ the curl more,” says Samuel. “To really own the movement at every point in the range of motion.”

You don’t have to do all your curls on your knees from now on, but doing them down there for a while with pauses will lead to better form on standing curls in the future. Samuel says: “How many people do you see who shift their elbows forward when they curl—thereby shifting some of the stress to the front delts? They’ll do this in the first half of the movement. So by pausing at parallel, you identify that flaw and correct it.”

For more tips and tricks to explode your muscle gains, pick up the New Rules of Muscle on DVD or on the All Out streaming service.