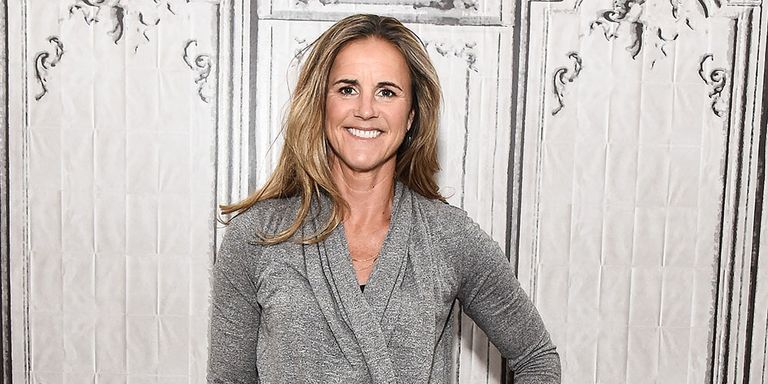 Just to give you a visual, here’s Brandi standing next to it…

Apparently the sculptor who made this was accidentally handed a picture of an aging Austin Powers to copy, because no one could be that bad while actually trying.

While she was probably tempted to melt the damn thing on the spot, Brandi was pretty sweet about the plaque. “It’s not the most flattering,” she said at the reception honoring her, per ABC 6. “But it’s nice.”

I don’t know about Brandi Chastain, but they nailed Mickey Rooney. pic.twitter.com/wfSb7irMbx

They made Brandi Chastain look like Ms. Doubtfire. https://t.co/VLYW2qTnwF

Poor Brandi Chastain. That looks like a stoned Jimmy Carter.

Ummm, that looks like Jon Voight ?? What in the actual hell?! They should be ashamed of this. Poor #BrandiChastain … one of the most iconic female athletes ever and this is how they honor her ? https://t.co/8gmzNkE5rd

Brandi Chastain is one of the most beautiful athletes I’ve ever covered. How this became her plaque is a freaking embarrassment for BASHOF. Makes Cristiano’s look perfect. pic.twitter.com/hta6c0cmSo

Seriously, it looks like Brandi’s sculptor checked out Cristiano Rinaldo’s Quasimodo-like sculpture and was all like, “hold my chisel.”

This sculpture of Cristiano Ronaldo is a great representation of how you look when you accidentally open the selfie camera on your phone pic.twitter.com/H8jjPeGwN3

Clearly Brandi deserves better and apparently everyone else thinks so, too. The hall of fame has reportedly agreed to redo the plaque. Fingers crossed it makes her feel a little more like this: