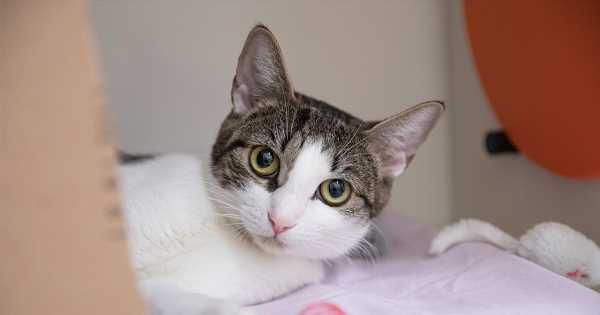 It was a hot July morning when a small brown-and-white tabby cat strolled into the lobby of the ASPCA Adoption Center.

“I was sitting in the lobby and someone near the doorway yelled ‘cat, loose cat!’” recalls Kimberley Koenig, an ASPCA Matchmaker. “She slunk around the security desk, then the adoptions desk, and headed toward the double doors to the cat condos.”

A Lead Animal Care Technician, quickly grabbed a spare cat carrier, scooped up the cat, and with Kimberley’s help, closed the carrier lid.

“We were unsure if she walked into the building on her own or if she was in the donation bin, but she seemed to know exactly where she was going,” Kimberley says.

Adds Kelly DiCicco, Manager of Promotions at the ASPCA Adoption Center, “She clearly knew where to find help.”

They’ve Got Her Number

Kimberley named the cat Eight because, in addition to being a staff member’s favorite number, it becomes the infinity symbol when turned horizontally.

In algebraic geometry, the figure is called a lemniscate, which means “shaped curve.” It’s also been metaphorically associated with love.

With no ID tag nor microchip, Eight was admitted to Adoptions and examined by veterinarians.

“She was slightly dehydrated, and we suspect she had had kittens recently because her mammary glands were developed,” says Dr. Danielle Delfino, Manager of Veterinarians at the Adoption Center. 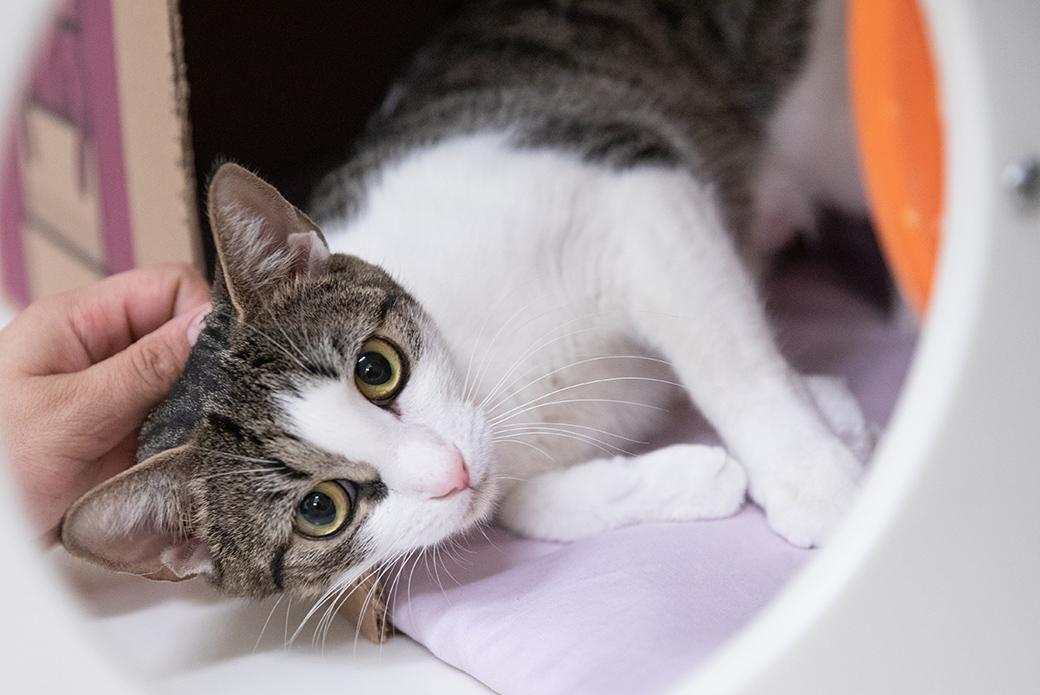 “She would crouch in her hide box, pupils dilated, and wouldn’t take any of the yummy treats we offered,” says Adi. “We decided to see if the presence of another cat would help her. Initially she didn’t respond, but after putting the other cat in the condo next to hers, she started eating treats and enjoyed petting. She even hopped out of her condo and onto the floor.”

Adi adds, “We knew at that point she would easily win the heart of a lucky adopter who could see past her initial fear.”

Following a spay, Eight was made available for adoption.

“What I Wanted After All”

Growing up in Brooklyn, Benjamin D. had always wanted a cat, but his father was allergic to them.

Now living on his own in Staten Island, Ben had been looking online for a cat to adopt since late June. 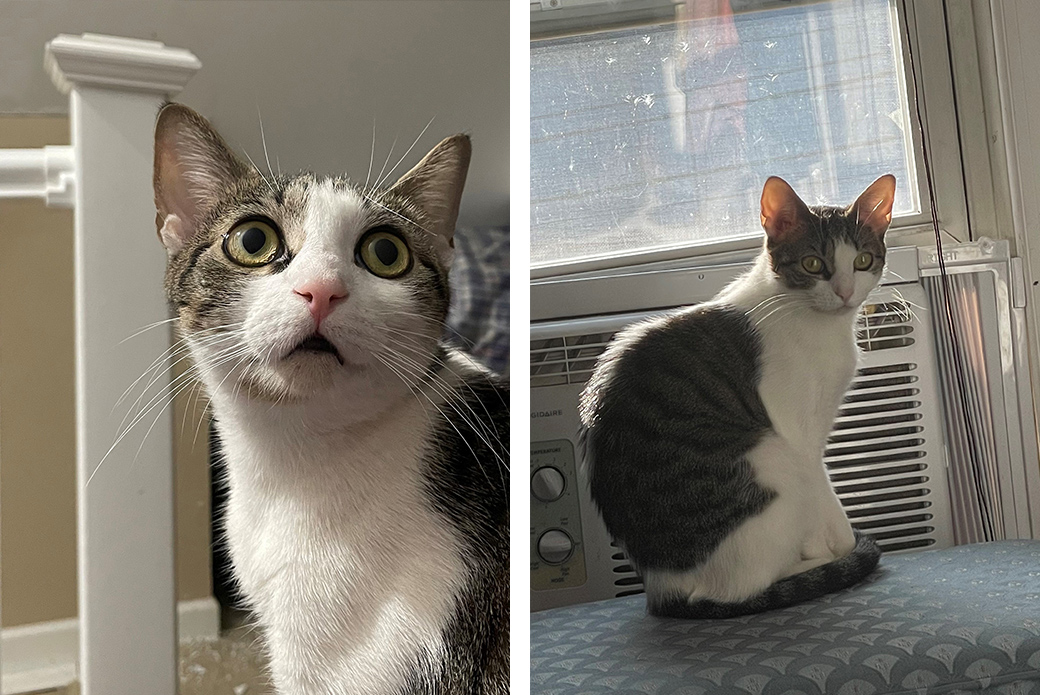 “Buying a pet is wrong when there are so many animals in shelters that need homes,” says Ben, who spotted a photo of Eight on the ASPCA website toward the end of July.

“When I saw her, I thought, ‘I need her,’” Ben says. He made an appointment to meet her in person.

“When I met her, she seemed kind of shy,” says Ben, who adopted Eight on July 27.

At home, Eight hid in Ben’s bedroom for nearly a month, although she came out to eat. Ben let her get acclimated at her own pace, employing patience and encouragement to coax her out of her shell.

“I envisioned having more of a lap cat, but she’s just not that kind of cat,” he says. “But I love her; I wanted her no matter what she was like.”

Eight now sleeps on Ben’s bed and the two have a special bond. She responds to her name and allows petting, sometimes approaching him for affection. 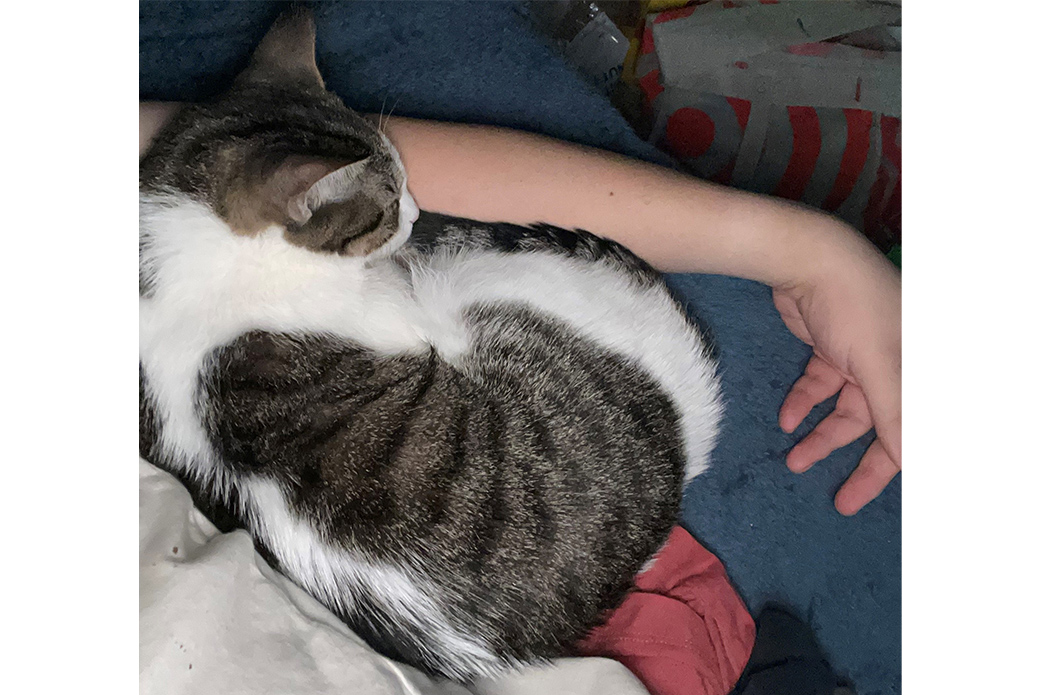 “We spend a lot of time together,” says Ben. “Eight really became what I wanted in a cat after all.”