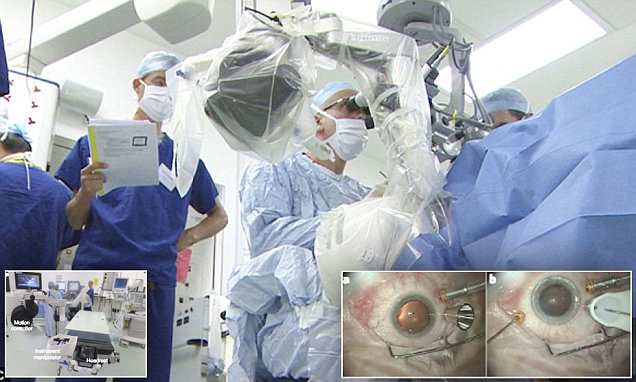 In a study of 12 patients suffering from distorted vision, a robotic procedure, known as PRECEYES Surgical System, successfully restored their sight without causing the bleeding side effects of traditional operations, a study found.

According to researchers from the University of Oxford, PRECEYES avoids hand tremors that can seriously damage the eye’s structure.

Yet the scientists warn such surgeries are ‘mired in controversy’ due to them taking longer and some arguing they are no better than operations carried out by skilled surgeons.

This comes after a priest claimed his eyesight was restored following a robot-performed operation in 2016.

Father William Beaver, then 70, said his distorted vision was similar to ‘looking in a hall of mirrors at a fairground’ but is now ‘delighted’ with the results. 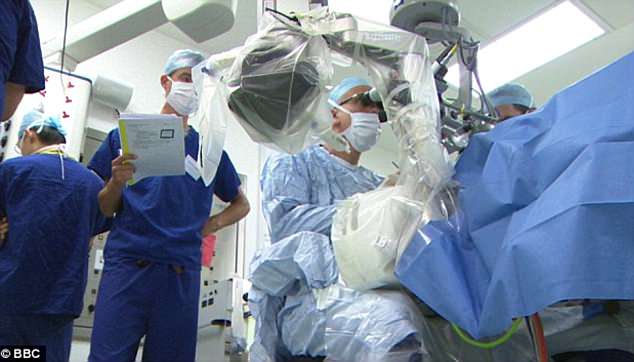 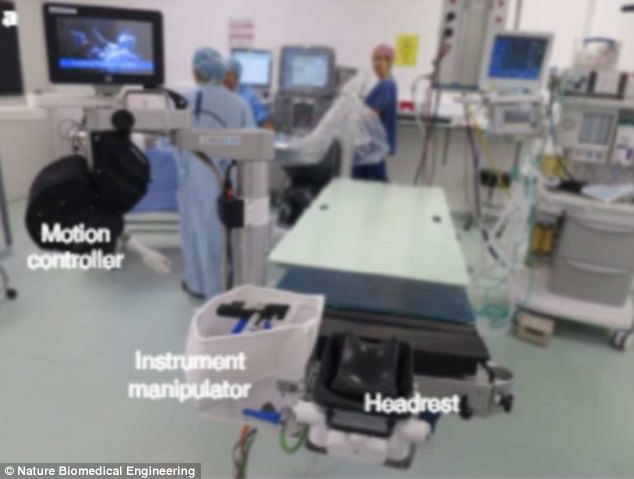 Patients’ heads are held in a headrest to restrict movement. Surgeons then control the speed of the robotic tools via a foot pedal and regulate their movements using a joystick-like device

PRECEYES’ tools are inserted into a small incision near a patient’s pupil.

The tools are then able to perform complex tasks, such as removing membranes that are distorting people’s vision.

The tools are then removed via the same incision.

Surgery speed is controlled by doctors via a foot pedal, with them being able to override the procedure at any time.

How is robot surgery different from traditional operations?

The researchers analysed 12 people who required a membrane to be removed from their eyes to improve their vision.

Half of the participants underwent surgery performed by robots while the remainder had traditional procedures.

Both operations began with a an incision under 1mm across just below the patients’ pupils.

The tools then exited the eye via the same incision.

Surgery speed was controlled by doctors via a foot pedal, with them being able to override the procedure at any time.

Movements were regulated by surgeons via a joystick-like device.

Surgery without robots involved doctors performing the above manually while looking through an operating microscope. 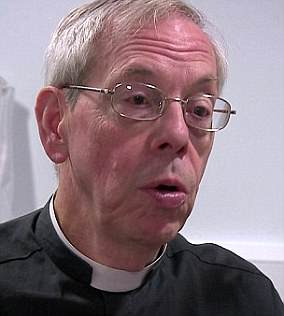 A priest said he felt ‘completely relaxed’ after surgeons performed revolutionary surgery inside his eye with the aid of a robot in September 2016.

Father William Beaver, then 70, an associate priest at St Mary the Virgin Church in Oxford, said his eyesight was returning following the operation, having previously experienced distorted vision similar to ‘looking in a hall of mirrors at a fairground’.

The procedure – the world’s first robotic operation – was carried out by surgeons at Oxford’s John Radcliffe Hospital, who welcomed its success and said it could revolutionise the way such conditions are treated.

‘Because, you see, the key is the precision. The pulse coursing through the hand of the surgeon could have ruined it, could have given me a haemorrhage and this just made it, well, simple.

‘My sight is coming back. I am delighted that my surgery went so well’.

All 12 surgeries were successful, however, the robotic procedures had a ‘higher degree of stability and precision of movement’, according to the researchers.

Although the robot surgery took longer ‘speed was sacrificed in the interest of safety’, they added.

Lead surgeon Professor Robert MacLaren told the New Scientist the doctors moved slowly out of caution due to them being unfamiliar with the robot.

Any bleeding that occurred in patients having robot-controlled surgery or a traditional operation was non serious.

Professor MacLaren: ‘Our next step will be to use the robotic surgical device for precise and minimally traumatic delivery of a gene therapy to the retina, which will be another first-in-man achievement and is set to commence in early 2019.’

He believes PRECEYES may even be able to directly unblock blood vessels in the eye or inject treatments into optic nerves, which are not currently possible.

The findings were published in the journal Nature Biomedical Engineering.