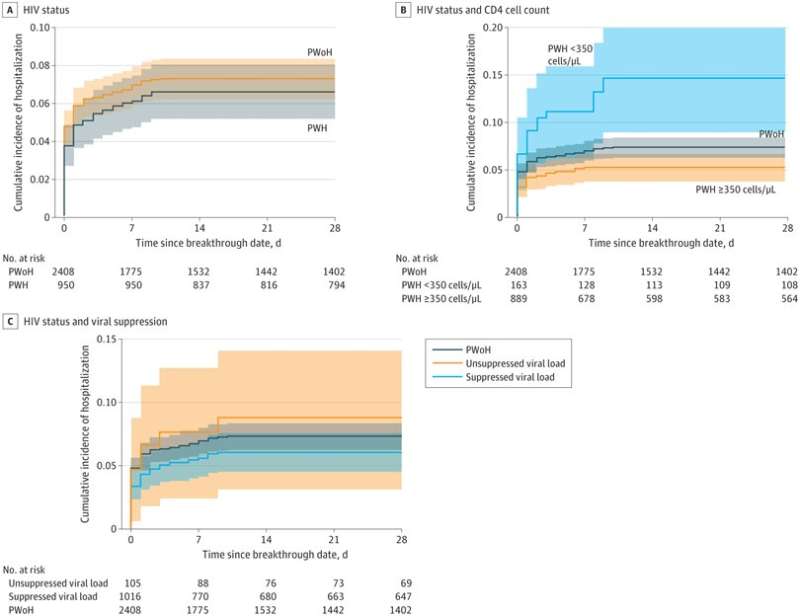 People with HIV who have moderate immune suppression appear to be at greater risk of severe COVID-19 “breakthrough” infection after vaccination, according to a study led by researchers at the Johns Hopkins Bloomberg School of Public Health.

These findings suggest that this group should be considered for additional vaccine dosages and other risk-reduction measures.

The study was published online October 13 in JAMA Network Open.

Currently, the CDC recommends people who are moderately or severely immunocompromised take additional precautions to protect themselves from COVID-19, including additional doses of vaccine.

“People with HIV and CD4 counts between 200 and 350 cells/mm3 are not included in the current CDC recommendations,” says study senior author Keri Althoff, Ph.D., MPH, associate professor in the Department of Epidemiology at the Bloomberg School. “Our findings suggest people with HIV who have CD4 counts less than 350 cells/mm3 should be considered moderately or severely immunocompromised by the CDC, and encouraged to take additional precautions to protect themselves from severe COVID-19.”

The Centers for Disease Control and Prevention recommends additional vaccine dosing and regular vaccine boosters for people who are moderately or severely immunocompromised. Although people do not need to prove their immunocompromised status to obtain extra vaccinations per the CDC’s guidelines, this category includes people with advanced or untreated HIV infection, defined as a CD4 T-cell count below 200 cells per microliter and an unsuppressed HIV viral load.

The new study made use of the Corona-Infectious-Virus Epidemiology Team (CIVET)-II cohort, which included patients from the health systems of Kaiser Permanente Mid-Atlantic States, Kaiser Permanente Northern California, the Veterans Health Administration, and the University of North Carolina. The initial study population included 33,029 people with HIV, and 80,965 people without HIV, who were fully vaccinated against COVID-19 during the period December 2020 through June 2021. The two groups—people with and without HIV—were matched on demographic factors such as age and sex, and by date of vaccination.

In the CIVET cohort, there were 3,649 cases of post-vaccination COVID-19 breakthrough infection, the vast majority mild, in the two groups combined. In a companion study published in June, Althoff and colleagues showed that these breakthrough infections happened at a higher rate in the HIV group, suggesting a 28 percent greater risk, compared to the non-HIV group. However, the level of absolute risk was low, at just 4.4 percent for the HIV group versus 3.8 percent for the non-HIV group.

In the new study, the researchers looked at the 249 cases of breakthrough infection that were classified as severe because they required hospitalization within 28 days of COVID-19 diagnosis. They found that, while the risk of severe illness in the first 28 days was low and comparable between people with HIV (7.3 percent) and people without HIV (6.7 percent), more immunocompromised people with HIV, with CD4 counts lower than 350 cells/mm3, had a 59 percent higher risk than people without HIV.

“Clinicians who care for people with HIV with moderately low CD4 counts, that is with CD4 counts less than 350 cells/mm3, should encourage them to take additional precautions to prevent severe breakthrough COVID-19 illness,” adds Althoff.