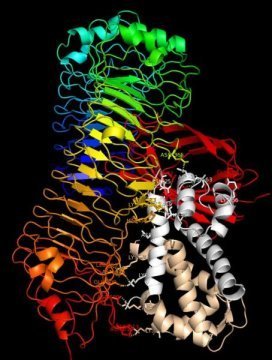 In the body, the immune system often begins its response to various attackers in the same way: the body activates immune cells, so-called phagocytes, which migrate to sites of inflammation caused by, for example, foreign pathogens or damaged tissue. There, the phagocytes release certain proteins, including the S100A8/S100A9 heterodimeric protein complex, which triggers or amplifies the inflammatory reaction at the site of the disease. However, if too many of these complexes are released, they can exacerbate the disease; for example, this happens in the case of autoimmune, rheumatic or dermatological diseases. Researchers at the Cells-in-Motion (CiM) Cluster of Excellence at the University of Münster (Germany) have now decoded how the activity of these proteins is precisely regulated. The leading scientists of the study, the immunologists Prof. Thomas Vogl and Prof. Johannes Roth, now want to use these novel fundamental insights to develop new treatment options to combat autoimmune diseases, arthritis, allergies or inflammatory diseases of the bowel, lung or cardiovascular system. The study was published in the Journal of Clinical Investigation.

Many scientific publications have already described the tasks of the two proteins S100A8 and S100A9. But so far, it has not been clear to researchers whether these two proteins acted alone or in conjunction with each other. The Münster researchers have now been able to show that the proteins always work as a heterodimeric protein complex composed of both S100A8 and S100A9; in other words, a complex where both proteins are firmly associated. As soon as it is released, the heterodimer complex binds to a TLR4-expressing cell, triggering a suitable immune response via this receptor. Importantly, the S100A8/S100A9 heterodimer complex only has a short life time to spark this initial impulse: If it does not find a suitable target cell for activation, two individual heterodimers associate to form a heterotetramer; in this form, each heterodimer complex is inactive. This mechanism guarantees that the body will only trigger an immune reaction where needed — in other words, the inflammatory reaction remains localized.

The researchers also showed that as soon as this regulation is disturbed so not all of the excess S100A8/S100A9 heterodimer complexes can form tetramers, the result is an exacerbation of disease: “Too many heterodimers remain active, trigger a strong immune response and act systemically in the entire body,” explains Prof. Thomas Vogl, the lead author of the study. This is a process that is, for example, behind blood poisoning — but it is also relevant for many autoimmune diseases, rheumatoid arthritis, allergies, inflammatory skin diseases and even cardiovascular diseases.

Developing new treatment options with ideally no side effects

These findings by the Münster immunologists may lead to new approaches for treating many inflammatory diseases. Currently, new drugs are already being used to totally block the TLR4 receptor signaling pathway to inhibit misguided immune responses. However, one problem is that sometimes the body has to combat bacteria at the same time. As the immune system is blocked, the TLR4 receptor can no longer fulfill this important function anymore. “This is why we’re searching for antibodies which specifically only block the S100-TLR4 axis, while the receptor is untouched, respectively free on the bacterial side,” says Thomas Vogl. “These antibodies should specifically block only the active heterodimers and, in the following, weaken the immune reaction only locally, at the site of inflammation. The TLR4 receptor, which is important for immune defense, remains untouched and can trigger the suitable immune response in the case of any bacterial danger.” Drugs developed according to this new approach to treat, for example, autoinflammatory disorders would therefore have far fewer side effects for patients than currently existing pharmaceuticals.

The next step for the researchers is to work together with companies to find suitable antibodies and develop pharmaceuticals for treating diseases accompanied by overwhelming immune reactions. The first patents have already been applied for. It will take years, however, before drugs are available to deactivate excess S100A8/S100A9 in the human body and thus prevent unwanted immune reactions.

The study is the result of interdisciplinary collaborations between five different CiM laboratories. “Without the expertise and the help of all other involved researchers, we would not have been able to elucidate these interesting results,” says Thomas Vogl. The Münster molecular biologists Dr. Athanasios Stratis and Dr. Viktor Wixler, for example, investigated genetically modified mice necessary for the study. The nuclear physicians Prof. Michael Schäfers and Dr. Sven Hermann contributed their expertise in imaging, enabling researchers to visualize the distribution of the S100 proteins in mice.