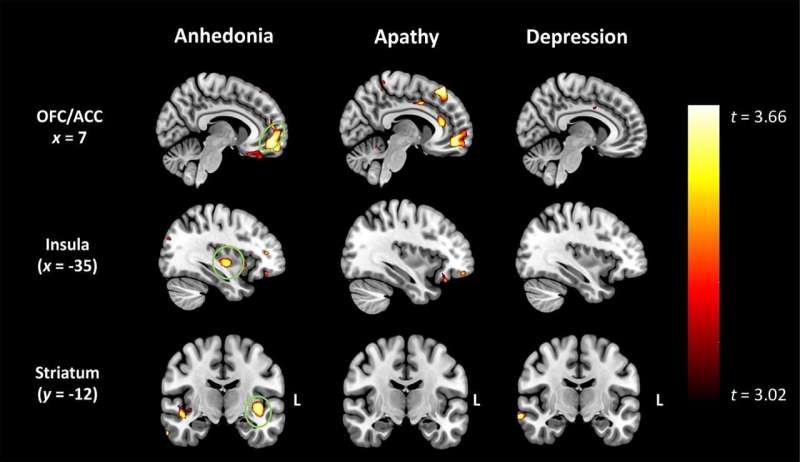 People with early-onset dementia are often mistaken for having depression and now Australian research has discovered the cause: a profound loss of ability to experience pleasure—for example a delicious meal or beautiful sunset—related to degeneration of ‘hedonic hotspots’ in the brain where pleasure mechanisms are concentrated.

The University of Sydney-led research revealed marked degeneration, or atrophy, in frontal and striatal areas of the brain related to diminished reward-seeking, in patients with frontotemporal dementia (FTD).

The researchers believe it is the first study to demonstrate profound anhedonia—the clinical definition for a loss of ability to experience pleasure—in people with FTD.

Anhedonia is also common in people with depression, bipolar disorder and obsessive-compulsive disorder and can be particularly disabling for the individual.

In the study, patients with FTD—which generally affects people aged 40-65—displayed a dramatic decline from pre-disease onset, in contrast to patients with Alzheimer’s disease, who were not found to show clinically significant anhedonia.

The results point to the importance of considering anhedonia as a primary presenting feature of FTD, where researchers found neural drivers in areas that are distinct from apathy or depression.

The findings were published today in the leading neuroscience journal, Brain.

The paper’s senior author, Professor Muireann Irish from the University of Sydney’s Brain and Mind Centre and School of Psychology in the Faculty of Science, said despite increasing evidence of motivational disturbances, no study had previously explored the capacity to experience pleasure in people with FTD.

“Much of human experience is motivated by the drive to experience pleasure but we often take this capacity for granted.

“But consider what it might be like to lose the capacity to enjoy the simple pleasures of life—this has stark implications for the wellbeing of people affected by these neurodegenerative disorders.

“Our findings also reflect the workings of a complex network of regions in the brain, signaling potential treatments,” said Professor Irish, who also recently published a paper in Brain about moral reasoning in FTD.