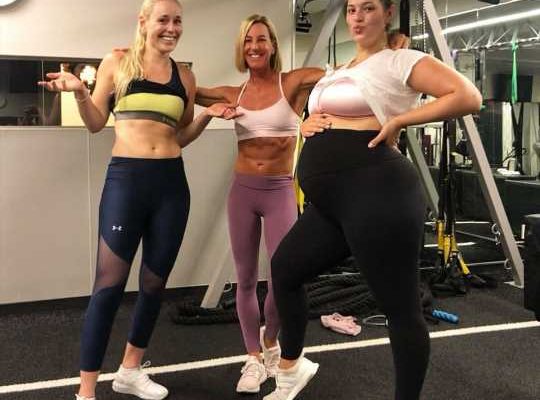 Despite the 85 gold medals in skiing to her name, Lindsey Vonn just wasn’t able to catch a pregnant Ashley Graham as the two battled it out on the indoor ski erg during a fun joint workout.

Graham celebrated beating Vonn not just once, but twice, on her Instagram Story after their workout. The supermodel, 31, who announced her pregnancy in August, shared videos of her winning workout and a little post-gym gloat.

“That’s right, I beat Lindsey Vonn on the ski erg TWICE. But she still beat me at literally everything else,” she said with a laugh. “You’re still the pro athlete, Lindsey!”

The ever-competitive Graham then jokingly shared her frustration that she couldn’t catch Vonn during the rest of the workout.

“Grr. It’s not a competition! But it still is,” Graham said.

Meanwhile, Vonn, 34, gamely admitted defeat on her own Instagram page.

“Yes it’s true, I got beat by an amazingly fit, very pregnant and incredibly beautiful super model in the gym,” the Olympian said. “You’re a stud @ashleygraham!! Must be your Midwest roots.”

And their trainer, Kira Stokes, cheered on both women.

“@lindseyvonn & @ashleygraham BOTH deserve a gold medal for today’s stellar session 🥇💪🏼,” she wrote on Instagram. “… Forever grateful to have the chance to work with such inspiring women.”

Graham is a frequent gym-goer, and loves boxing, HIIT and weightlifting classes. She’s kept up her workouts throughout her pregnancy — even though she’s struggled to find maternity workout pants.

“Please send help! Need pregnancy workout pants that go above my belly and are durable!” she begged her followers.

And Vonn is getting back to working out again after she retired from skiing in Feburary, and after a difficult leg surgery two months later. Vonn had put off surgery to finish out her last professional season, and the damage to her “completely” torn LCL, or lateral collateral ligament, was worse than expected.

“Unfortunately since I put off surgery I had more damage than expected,” she said in April. “I had an additional meniscus tear and needed chondroplasty of my knee cap.”

But surgery went well, and after months of recovery and physical therapy, Vonn is back in the gym battling supermodels like Graham and her new fiancé, the NHL’s P.K. Subban.