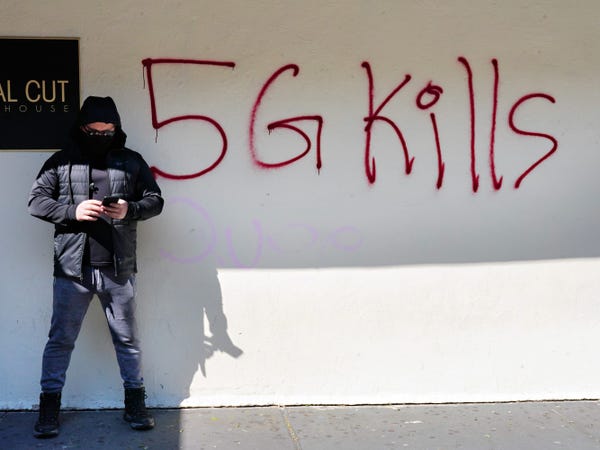 There's now evidence that a person's personality traits could influence how likely they are to believe in conspiracy theories.

Specifically, people who are self-important, narcissistic, anxious, depressed, or impulsive are slightly more likely to cling to a conspiracy theory than people who don't exhibit these traits, researchers from Emory University found.

The study, published on September 10 in The Journal of Personality, looked at 1,927 people, a mixture of Emory student and random virtual participants. The majority of participants were college-educated, white, and identified as Democrats, but a small sample of Asian, African American, and Hispanic participants also participated.

First, the researchers determined how likely it was for each participant to believe in a conspiracy theory. To do this, they asked each person to rate conspiracy statements, some based on specific events and other more general theories, on a scale of 1 (completely false) to 6 (completely true).

Statements included, "U.S. agencies intentionally created the AIDS epidemic and administered it to Black and gay men in the 1970s," and ""New and advanced technology which would harm current industry is being suppressed."

They found 60% of participants weren't likely to believe these conspiracies, but 40% were.

Your personality could predict your proclivity for conspiracies

The researchers then ran another test to analyze subjects' individual personality traits.

To do this, researchers gave participants personality trait tests where they answered how much they agree or disagree with certain statements like, "I often have to deal with people who are less important than me" and "I reconsider my opinions when presented with new evidence."

These responses helped the researchers pinpoint personality traits like conscientiousness, or the tendency to be organized, responsible, and hard-working, meanness, impulsiveness, entitlement, and many other traits.

The correlations between certain personality traits and a tendency to believe conspiracies was small, lead researcher Shauna Bowes told Insider, but still offer insights into how personhood influences behavior.

People who had narcissistic, impulsive, detached, anxious, or depressed personalities, or a combination of these traits, were more likely to also say they believe certain conspiracies, Bowes' team found.

Psychoticism, or a measure of being open and creative in an unconventional sense (think Luna Lovegood from "Harry Potter"), as Bowes described it, was another trait that showed a weak link to conspiracy beliefs.

"Those things might not necessarily hang together in the same individual, but they're traits across individuals that might make it more likely to not question your beliefs because you're certain of them, or find comfort in them because nothing else seems to make sense, and you're alone and scared," Bowes told Insider.

She said parsing out a specific trait or personality archetype for the conspiracy-susceptible is difficult because so many factors play a role in the choice to subscribe to one.

But the study could still help folks make sense of the uptick in conspiracy-theory fodder since the start of the coronavirus pandemic.

One popular conspiracy, QAnon, popped up on the internet in 2017, and posits an unfounded theory that President Trump is engaged in an undercover battle against celebrities and Democrats who support human trafficking and pedophilia.

An August investigation from The Guardian found social media groups supporting and spreading QAnon messaging have skyrocketed over the past few months. Facebook removed 790 QAnon groups from its platform in July, and Twitter removed 7,000.

QAnon followers say this same group of celebrities fabricated the coronavirus pandemic. According to Bowes, her study could help explain their beliefs.

"I think the pandemic is going to be such a fascinating time to look at conspiratorial ideation because the explanations for COVID-19 are immensely unsatisfying. It's unsatisfying because it's too big, and there has to be something else causing this or explaining this," Bowes said of some conspiracy believers' lines of thought.

Most of us are more alone than ever this year, and that may make us more susceptible

For people who are anxious or depressed, two conditions that have spiked during the pandemic, turning to a conspiracy to make sense of the grey areas can create feelings of order and calm, even if it's rooted in something another person finds absurd.

"We're all alone to the point where maybe we've never experienced this before, and there's so much mixed information in society. I think a lot of people are going to be turning to a framework like conspiracy beliefs to say, 'Oh OK, I'm not alone. It makes sense,'" Bowes said.