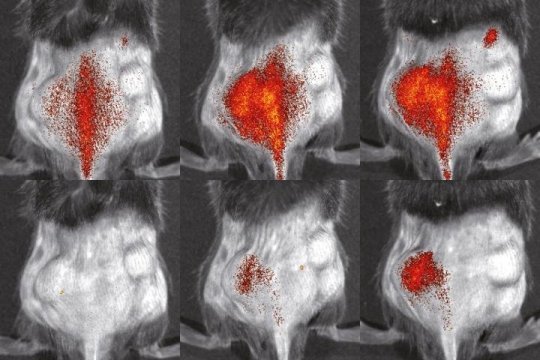 The process that the body sets in motion in the event of inflammation is complex, but also impressive. The main role here is played by immune cells migrating from the blood into the tissue to fight the inflammation. If too many of these cells are active, however, they can just as easily cause damage. Finding out more about the cells’ behaviour can provide a basis for researchers to develop individual treatments for inflammation — for example, by guiding cells specifically towards the centre of the inflammation or through a timely discontinuation of a certain treatment. Researchers at the Cells-in-Motion Cluster of Excellence at the University of Münster (Germany) have now developed a method enabling them to better evaluate and study the activity of inflammatory cells in mice: they have succeeded in genetically modifying precursors of immune cells, then increasing their numbers in a test tube and finally tracking them spatially and temporally in living organisms. This process was made possible by interdisciplinary collaboration between immunologists and molecular imaging specialists. The new method also means that the number of animal experiments can be greatly reduced. The study has been published in the Theranostics journal.

When the body wards off an infection, it is initially various types of scavenger cells, so-called phagocytes, which migrate successively out of the blood vessels and into the tissue, to the inflammation centre. They recognize pathogens, “eat them up” and kill them. If they are activated in an uncontrolled way, however, they can also drive disease progression. In order to investigate the migratory mechanisms of various phagocytes, researchers usually study genetically modified mice which display inflammatory diseases. This is not easy, however, as it requires a large number of immune cells and a lot of mice need to be bred as donors. A team of immunologists headed by Prof. Johannes Roth, a group leader at the Cluster of Excellence, have now solved this problem with their new approach. They used immortalized myeloid precursor cells — so-called ERHoxb8 cells — which multiply almost endlessly in a test tube and, under certain conditions, can develop into immune cells. In this way, the researchers ultimately obtained a large number of different types of phagocytes.

“Our next aim was to produce genetic modifications to the cells, such as occur for example in innate immune deficiencies,” says Johannes Roth. Such mutations often affect proteins in the membranes of immune cells, which help them to get to sites of inflammation. One of these proteins is VLA4. However, researchers have only limited possibilities to study what exactly happens when the protein is missing because it is very difficult for them to breed the necessary mouse strains. The Münster immunologists found a test-tube alternative for this, too: they used the molecular biological method of genome editing to systematically “cut out” the gene segment relevant for VLA4 and produce the appropriate “deficient” immune cells. “As a result of our new method,” says Dr. Sandra Gran, one of the two lead authors of the study, “we can now, for the first time, genetically modify different types of immune cells at will and deactivate important inflammation mechanisms.”

The group of imaging specialists led by Prof. Michael Schäfers, Coordinator of the Cluster of Excellence, labelled the cells thus obtained with various fluorescent dyes in order to be able to study them in living organisms — initially with the optical method of fluorescence reflectance imaging. They injected into mice with an inflammatory skin disease both mutated and healthy immune cells and succeeded in comparing the paths taken by each of the cells inside the same animal. This enabled them to greatly reduce the number of laboratory animals, because usually different groups of animals have to be used for such comparative studies. The new method worked: “We were able to observe very precisely how differently the various immune cells behaved,” says Dr. Lisa Honold, the other lead author of the study. Using the same method, the researchers examined further cells which were lacking other membrane proteins.

In a further step, the researchers looked at migrating immune cells in mice which had experienced a heart attack. Naturally enough, such examinations present a great challenge because the heart is located deep within the body and moves very fast when pumping. The researchers used a nuclear medical imaging method — known as single photon emission tomography, SPECT for short — enabling them to produce digital cross-sections from deep layers of tissue. They labelled the cells in the test tube with a radioactive substance whose radiation can be measured and visualized in images. After they had injected the labelled cells to mice, they tracked their locations in various phases of the infarct. “By using serial imaging, we can now follow the behaviour of immune cells over a long period of time,” says Nuclear Medicine Professor Michael Schäfers. This should also lead to a reduction in the number of laboratory animals needed because traditional molecular biological methods merely produce snapshots and require many more experiments.

The researchers intend to make use of their new method in preclinical studies in the future and continue to develop it — for example, applying it to infections and to rheumatological and arthritic diseases. As yet, however, it cannot be predicted when the results can be used to benefit patients.