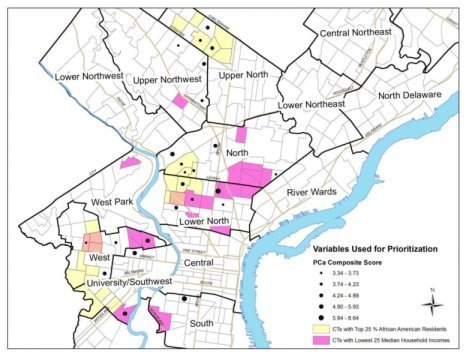 To catch prostate cancer at earlier stages, when it’s more easily treated, many institutions do community outreach and education sessions to explain why cancer screenings can be life-saving. In order to have the highest impact, however, institutions must select where to focus their efforts. Prostate cancer is most common among African American men and can be more aggressive in African American and men in a low socioeconomic bracket. Therefore, many institutions base their outreach on these two demographic factors. However, work recently published in the journal Preventive Medicine shows that this may not be the best approach and offers another method for identifying areas with the highest prostate cancer burden.

“We know that not every man in a high risk demographic will develop prostate cancer,” said senior author Charnita Zeigler-Johnson, PhD, MPH, researcher with the Sidney Kimmel Cancer Center (SKCC) at Jefferson Health, one of only 69 NCI-Designated Centers and only one of eight to have a prostate cancer program of excellence. “We’ve seen that often the same programs and organizations are targeted for education and outreach efforts. We realized that we’re probably leaving out large areas of the city that potentially have higher risk. I wanted to create a more effective tool to find those areas.”

“None of these factors alone can be used to categorize burden of the disease. We found they were more predictive when combined,” said Dr. Zeigler-Johnson, who is also Assistant Professor of Medical Oncology at Jefferson (Philadelphia University + Thomas Jefferson University.

The researchers then used mapping software to geographically identify census tracts with the highest scores. “We were surprised to find clusters of high burden that did not always overlap with the areas with the largest concentrations of African Americans or those with lowest socioeconomic status measures,” said first author Russell McIntire, PhD, MPH, an Assistant Professor in the Jefferson College of Population Health.

“We are seeing the highest prostate cancer burden cluster in tight geographic areas,” said Dr. Zeigler-Johnson, whose earlier work suggested similar trends. “We think it’s worth studying why these areas of the city are at higher risk for poor prostate cancer outcomes. Could it be that neighborhoods share similar practices and norms, or lack of awareness about prostate cancer risk? At this point it’s too early to tell.”

Although the tool was developed for prostate cancer, the method could be developed and applied to other cancer types in order to hone educational outreach efforts for the greater impact.

Now that Dr. Zeigler-Johnson and colleagues have identified areas of high prostate cancer risk in Philadelphia, they will develop, implement, and test an educational outreach program. “Testing our assumptions in the community will help us determine if this tool can be more effective than outreach targeted using traditional methods,” said Dr. Zeigler-Johnson.

This research was supported by U.S. Department of Defense Grant #DODW81XWH-15-1-0693, and pilot funding from the Sidney Kimmel Cancer Center at Jefferson Health. The funders had no role in the study design, conduct of the experiments, and interpretation of the data.