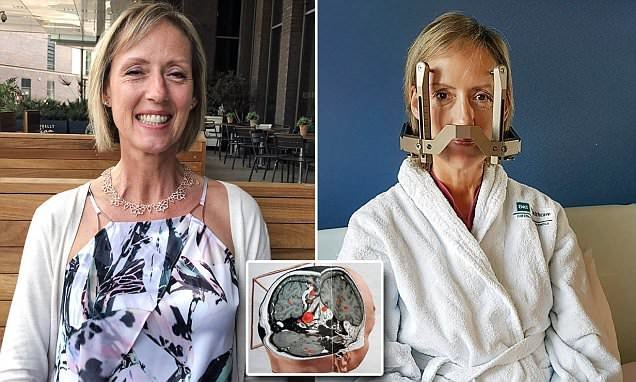 Nurse battling 17 brain tumours defies medics by using Dr Google: Mother-of-two, 54, told she only had months to live used radiation therapy she researched online to save her life

A mother-of-two who survived 17 brain tumours as well as breast, liver and lung cancer has defied doctors’ odds.

Sue Nicklan, 54, was diagnosed with terminal cancer in October 2015 and told she was unlikely to make it to Christmas – but she says she ‘refused to give up’.

However, despite having successful treatments and bouncing back, Mrs Nicklan was dealt another blow when, in January 2017, she was told she had 17 brain tumours.

After desperately doing her own research online, she asked doctors for Gamma Knife therapy – a radiation treatment which accurately targets brain tumours.

Gamma Knife, alongside chemotherapy and immunotherapy, has successfully shrunk her tumours to a fraction of their size.

Mrs Nicklan, a nurse from Chelford, Cheshire, is now looking forward to the future and sharing her story in a bid to give others hope.

She has regular scans to make sure the tumours haven’t grown back and says: ‘I’m now three years post my 12 weeks life expectancy which is amazing.’ 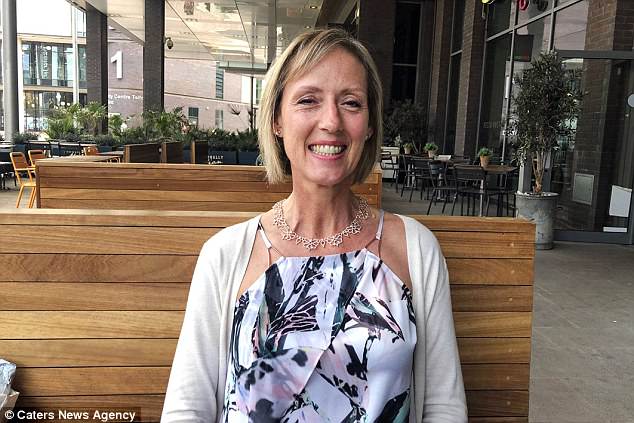 Mrs Nicklan, a nurse from Chelford, Cheshire, fought off breast, lung and liver cancer only to find out she had 17 tumours in her brain

Mrs Nicklan had been battling cancer in her breast, lungs and liver since 2012, and was given just twelve weeks to live in October 2015.

And despite surgery to remove the tumours in her lungs and liver as well as invasive chemotherapy, Mrs Nicklan’s cancer continued to spread across her body and brain.

By January 2017, she had 17 brain tumours and was offered full brain radiation, something she rejected due to the risks of permanent brain damage.

In a race against time, Mrs Nicklan did her own online research and found out about gamma knife radiation.

Metal brace screwed to the skull for Gamma Knife

Gamma Knife is a type of treatment that uses beams of radiation to target each individual tumour in the brain, and is offered by the NHS.

After months of gruelling treatment – which involved having a metal brace screwed to her skull for the targeted radiation – Mrs Nicklan has defied all doctors’ expectations. 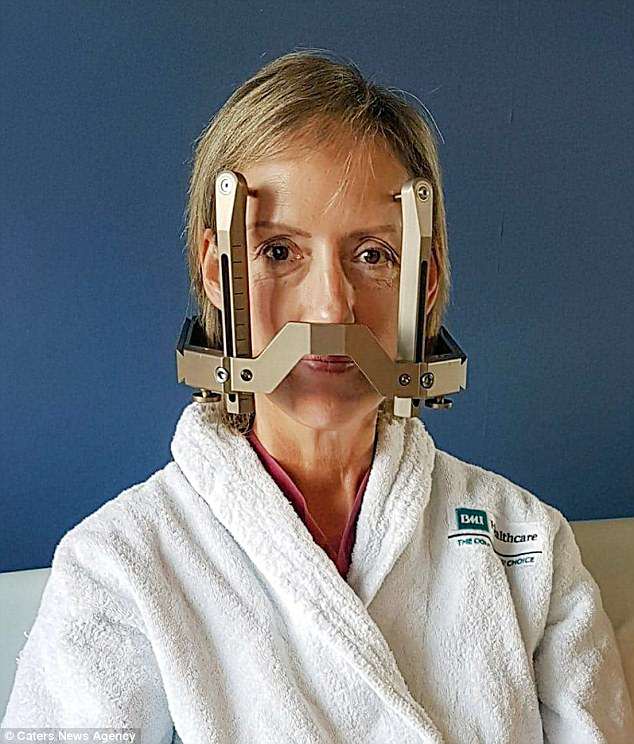 After doing her own research, Mrs Nicklan received Gamma Knife radiation therapy, which required a metal brace to be screwed into her skull for the sessions 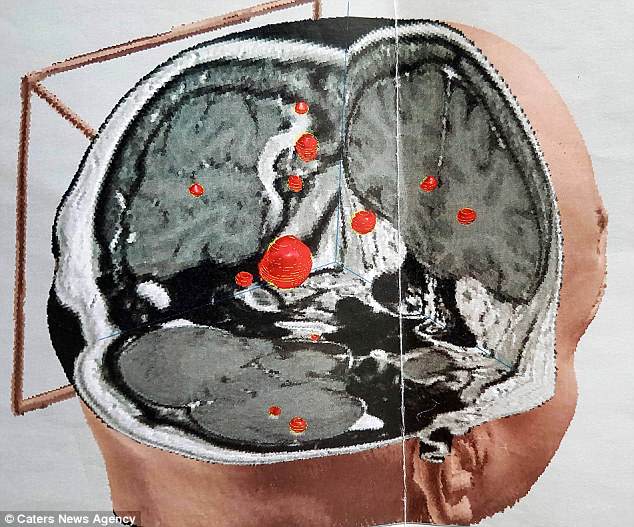 Sue Nicklan’s MRI scan, which shows a dozen cancerous tumours in her brain – ‘I knew it would be almost impossible to beat as normally people have one or two [tumours]’

The mother to Ellie, 23, and Sam, 22, said: ‘Last January I was initially diagnosed with 12 brain tumours but that soon became 17.

‘I was devastated and knew it would be almost impossible to beat as normally people have one or two not over a dozen.

‘I was first offered whole brain radiation by the NHS which I declined as I was worried about the side affects such as brain damage. 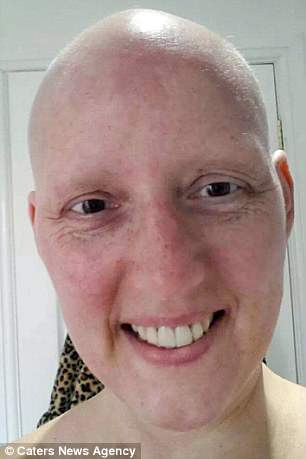 ‘After doing my own research, I decided to go with gamma knife radiation as this targets the brain tumours directly and does not affect the rest of the brain.

‘I had to go through it twice because after the first time, there were still cancerous cells in my body producing the tumours.

‘I refused to give up’

‘I also underwent a mixture of chemotherapy and immunotherapy, something I knew was the best option after researching treatments online.

‘Despite only being given 12 weeks to live, I refused to give up.

‘Luckily the treatments were successful and after a scan in April last year I was told the tumours were tiny.

‘I was so happy that all my hard work of online research and undergoing to gamma radiation had paid off.

‘I now have regular scans each year to ensure the tumours haven’t grown back and I’m now three years past my 12 weeks life expectancy which is amazing.’

Mrs Nicklan was first diagnosed with stage three HER2 breast cancer in 2012.

Despite chemotherapy, radiotherapy, immunotherapy and surgery, it returned two years later in her lungs and liver.

She realised when on holiday with her husband Mark, 51.

She added: ‘I knew there was something wrong in 2014 as I was tired, I had trouble breathing and I couldn’t even stand. 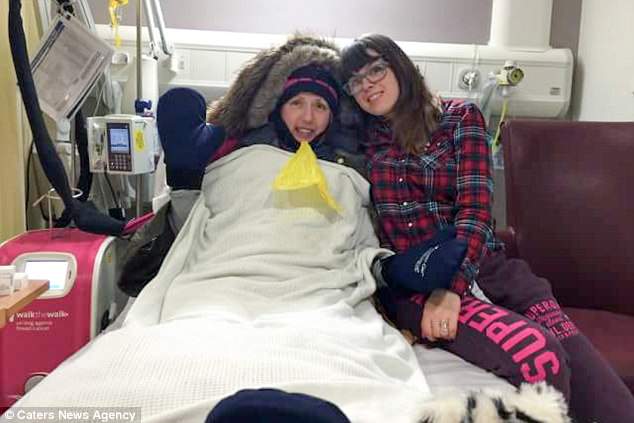 Mrs Nicklan says she is grateful and lucky to have had the support of her family – husband Mark, daughter Ellie (pictured) and son, Sam 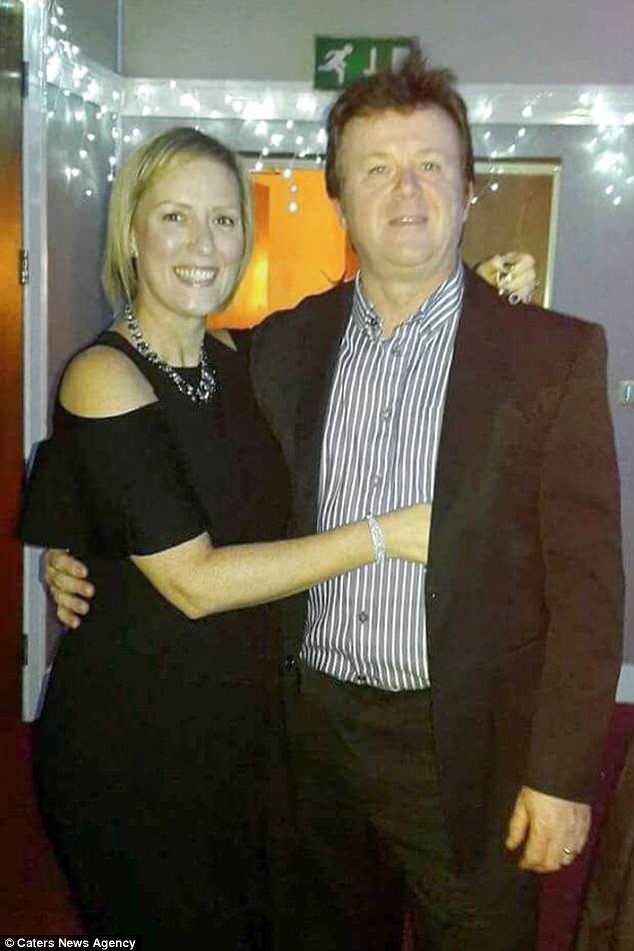 Sue Nicklan with her husband Mark, who drove her 13 hours home from France when they realised she was seriously ill on holiday 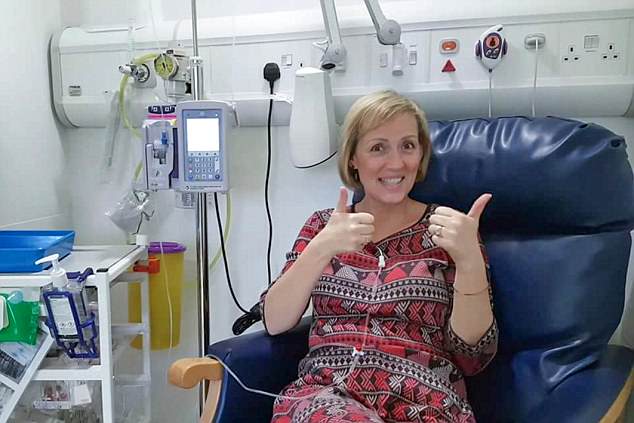 Mrs Nicklan received cancer treatment on and off for five years between 2012 and 2017, and now has to return for regular scans to check the tumours aren’t growing back

‘I was on holiday in France but I was feeling so ill that my husband had to drive thirteen hours to get me back to the UK.

‘The emergency scan showed that unfortunately the aggressive cancer was back and had spread to my lungs and liver.

WHAT IS GAMMA KNIFE RADIATION THERAPY?

The Gamma Knife is not an actual knife but uses beams of gamma radiation to treat lesions in the brain.

The technique provides an alternative treatment for conditions for which brain surgery is not advised.

Numerous beams of radiation are all targeted at the same spot in the brain, resulting in an intense, short blast of radiation directly to the cancer.

Because each individual beam is targeted and not very intense on its own, the technique minimises damage to normal brain tissue around the tumour.

Whole brain radiation, however, is less targeted and can cause damage to normal tissue and has a higher risk of brain damage to the patient.

‘But this time I had become allergic to the chemotherapy drugs and by the October of 2015 I was told I was unlikely to make it to Christmas.’

But she battled against the odds.

‘I have a future to look forward to’

After treatment with a chemotherapy drug called docetaxol in a combination with immunotherapy – a mix of drugs that slow cancer growth and allow chemotherapy for a longer time – and gamma knife radiation for her 17 brain tumours, she is still alive and fighting against her prognosis.

Mrs Nicklan said: ‘I’m so thankful I have a future to look forward to, I have been incredibly lucky to survive not one but 17 tumours.

‘I was lucky enough to have my husband Mark and my children Ellie and Sam by my side.

‘During my treatment I was also supported by the Maggie’s Centre who support those affected by cancer and now I’m going catwalk to raise money for the charity on June 16.

‘It is a beautiful place. It is a big glass building where you can relax, seek advice from specialists and get all the support you need.

‘It has a very positive vibe, it is a fun place to go’.