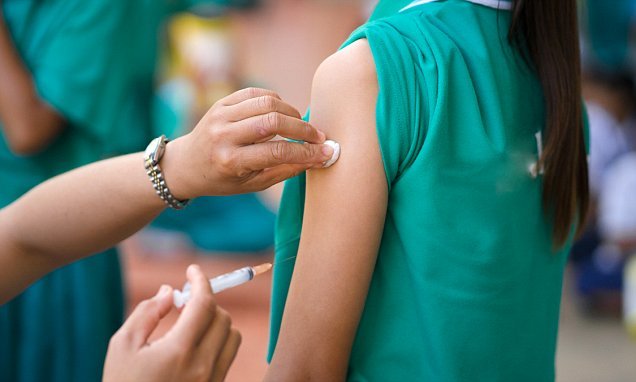 Hope for HPV-related cancers: New vaccine gives a boost to treating even the most advanced head and neck cancers

A vaccine may boost treatments for even advanced HPV-related head and neck cancers, a new trial suggests.

Human papillomavirus, a common sexually transmitted infection, is now the leading cause of head and neck cancers in the US.

And these cancers are becoming more common.

Though early-stage head and neck cancers are usually treatable, the best immunotherapy for later stage cases only works for about 15 percent of patients.

Researchers at the University of Pennsylvania tested a new vaccine in a small trial and found that it could boost patients’ responses to immunotherapy drugs, offering hope to patients with few options. 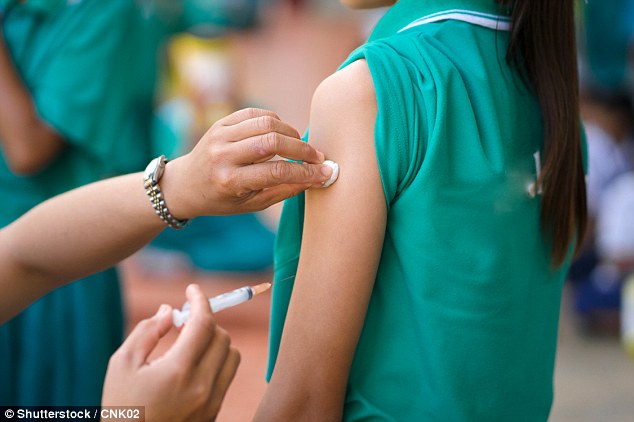 University of Pennsylvania researchers have developed a vaccine that activates the immune system to fight HPV-related head and neck cancers, a new study reveals

The sudden, recent surge of head and neck cancers related to HPV has sent shock waves of alarm through the medical community and the general public.

The virus can cause genital and oral warts that are contagious, but typically clear up on their own and don’t do any lasting harm themselves.

But HPV has long been known to be a risk factor for cervical cancer in women – and nearly 100 percent of the population will be infected at some point.

There are more than 100 strains of the virus, but about a dozen of them are cancer-causing.

Of those the most dangerous are types 16 and 18.

The two strains are responsible for an estimated 70 percent of the nearly 65,000 annual cases of head and neck cancer.

Head and neck cancers are treatable in their early stages, but kill some 13,700 people a year.

The best defense against these cancers is the HPV vaccine, which is recommended for 11- or 12-year olds, and can be given in two or three doses through age 26 for women and age 21 for men.

But after that age, doctors typically won’t vaccinate people against the virus, estimating that they have likely already been exposed.

‘Sure, vaccination rates are rising in teens and adolescent patients, but what about people who were never vaccinated? There is a critical need,’ says lead study author Dr Charu Aggarwal.

For the 20 or so percent of patients that develop metastatic head and neck cancers that can’t be surgically removed, an immunotherapy called anti-PD-1 that stimulates the immune system to deploy T-cells to fight cancer is the last hope.

But it only works in about 15 to 20 percent of patients.

‘We don’t have all the answers [as to why], but it’s disapointing that it only works in some patients,’ says Dr Aggarwal.

‘We think they inherently don’t have immune cells that are able to go into the cancers for whatever reason.’

But she and her team theorized that a vaccine called MEDI0457 might change that because it is designed to specifically target the HPV that led do the cancer.

‘This kind of vaccine will drive the T-cells and white blood cells into the tumors’ Dr Aggarwal says.

She and her team tried MEDI0457 in 21 patients that had already had and beat head and neck cancer, to see if they could activate the desired immune response.

They tried it first in these patients because ‘if we can’t get an immune system response, there’s no point in trying it in metastatic patients. I’m not going to go to a patient that’s dying and say “I’m going to try this” when they really need active treatment,’ Dr Aggarwal explains.

In 18 of the 21 patients, they saw exactly the immune response they were looking for, according to their study, published today in the journal Clinical Cancer Research.

In fact, one patient was given the experimental vaccine while he was in the early stages of his cancer, before surgery.

However, seven months later, the cancer spread and his doctors found metastases.

When he was given anti-PD-1 – the standard treatment for his stage of the disease – it worked, and he was completely cleared of the disease.

‘This response suggests the vaccine may, in some manner, prime the immune system, potentially boosting the effects of subsequent anti-PD-1 therapy,’ Dr Aggarwal said.

In light of these findings, she and her team are gearing up for a larger clinical trial and are looking to recruit 50 or 60 patients that are already in the later stages of head and neck cancers to try their combined therapy on.

And Dr Aggarwal hopes that  the vaccine will be even more broadly available soon.

‘We’re close; maybe a couple more years. I wish I had a crystal ball, but I think we’re very close but need to accelerate and increase clinical trials,’ she says.

‘This is a growing epidemic, and it’s a real need as we’re seeing more and more young patients.’