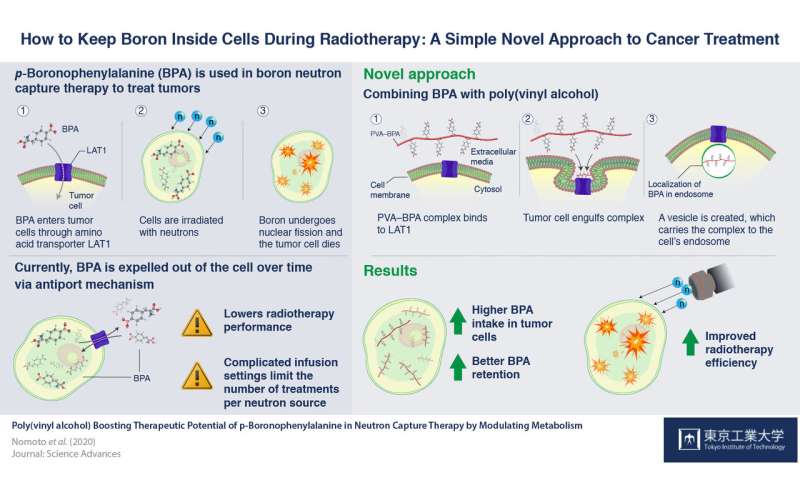 The growing knowledge about cancer biology has enhanced the development of many therapeutic strategies that involve selective targeting and killing of cancer cells. One such therapeutic option is boron neutron capture therapy (BNCT), a radiotherapy process involving transferring boron into cancer cells and exposing it to neutron particles, causing it to undergo nuclear fission, which kills the cancer cells. If clinicians can ensure that boron is present only in cancer cells, they can specifically destroy only cancer cells without harming the normal cells of the body.

Scientists at Tokyo Tech, Kyoto University, and Innovation Center of NanoMedicine (iCONM) have improved upon current BNCT by combining BPA with polyvinyl alcohol to produce the PVA-BPA complex, which has a longer cell retention time, enhancing the cancer-killing potential of BNCT.

Scientists first discovered the way to induce this selective uptake using p-boronophenylalanine (BPA). BPA is a boron-containing compound with a phenylalanine structure. One of the factors that distinguishes cancer cells from normal cells is an overabundance of special structures called LAT1 amino acid transporters, which recognize and allow the transport of phenylalanine into the cell. So, when BPA is present outside cancer cells, these transporters on the cell surface allow it to enter cancer cells, permitting successful BNCT. BPA has long been considered the best drug available for BNCT.

However, BPA has a drawback: Once BPA levels increase within the cancer cells, it is expelled back out via an “antiport” mechanism, making it challenging for BNCT to be effective in some cases. Thus, patients are required to receive a continuous infusion of BPA for 30 to 60 minutes to maintain the necessary amount in the cells for the reaction to be successful. This also leaves the door open for human errors, such as the possibility of dislodging the needle during the process.

To overcome these drawbacks, scientists at Tokyo Tech, Kyoto University and iCONM led by Prof. Nobuhiro Nishiyama decided to explore other means of retaining boron inside cancer cells for longer periods. “We assumed,” Prof. Nishiyama says, “that modulating the presence of BPA inside the cell will ensure that they are not sent back out via their antiport mechanism.”

To examine this, they mixed a compound called polyvinyl alcohol (PVA) and BPA together to form a PVA-BPA complex, and observed the internalization of this compound in cancer cells. They found that the addition of PVA did not affect the phenylalanine structure of BPA, allowing the LAT1 transporters to recognize the PVA-BPA complex. However, as this complex was too large to pass through the transporters, the LAT1 transporters instead engulfed the complex in organelles called endosomes and transported them into the cells. Since BPA was now safely located in endosomes, the cancer cell was not able to push it out immediately by the antiport mechanism. This ensured that boron remains in cells for a long enough time for the cancer cells to be effectively killed. This method was also tested in animal models, and anti-cancer activities of BNCT were found to be enhanced.

Addition of PVA thus presents an extremely simple solution to boost the therapeutic potential of BPA. “This technique is effortless,” notes Prof. Nishiyama, “and offers a novel approach for drug delivery, focusing on the metabolic elimination processes of drugs. We will advance research on the PVA-BPA complex for clinical trials in cooperation with STELLA PHARMA CORPORATION who has conducted BPA clinical trials.”