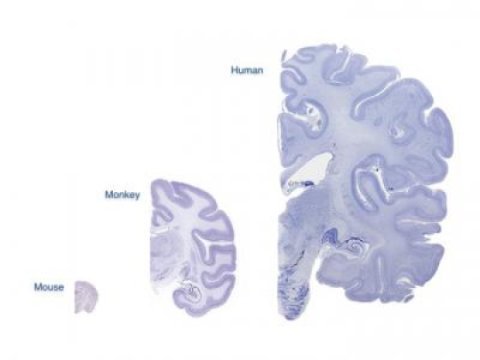 Researchers at King’s College London have discovered a fundamental process by which brains are built, which may have profound implications for understanding neurodevelopmental conditions like autism and epilepsy.

The study, published in Nature and funded by the Wellcome Trust, also answers an evolutionary mystery about how the delicate balance between different types of brain cells might be maintained across species with vastly different brain sizes.

The cerebral cortex is the largest region of the human brain and is responsible for many of our advanced abilities such as learning, memory and our ability to plan future actions. The cerebral cortex contains two main types of brain cells: excitatory and inhibitory neurons, which can be more simply defined as ‘go’ and ‘no-go’ neurons.

Excitatory ‘go’ neurons process information and provide orders telling other neurons what to do. Inhibitory ‘no-go’ neurons restrict the activity of excitatory neurons so that they don’t all go at the same time. Too much ‘go’ leads to the over-firing of neurons seen in epilepsy, while too much ‘no-go’ causes cognitive problems.

The researchers have discovered how the correct balance is achieved in the number of ‘go’ and ‘no-go’ neurons by studying the brains of developing mice. Since the ratio of the two cell types in all mammals is remarkably similar, the findings are likely to apply to humans.

‘Like many fundamental things in nature, the process we have uncovered is elegant and likely very important,’ says senior author Professor Oscar Marín, from the Centre for Developmental Neurobiology at the Institute of Psychiatry, Psychology & Neuroscience (IoPPN).

‘This study fills a big gap in our understanding of how the brain is built, explaining quite simply how the balance of excitatory and inhibitory neurons in the cerebral cortex has remained constant as mammals have evolved. It is probable that this process has been critical in allowing human brains to expand.’

Co-lead author Dr Kinga Bercsenyi from the Marín laboratory at the IoPPN explains: ‘If we imagine brain activity as a conversation, neurons have to be connected to each other in order to talk. During the first two weeks after birth, ‘no-go’ neurons can sense if they are alone and are programmed to die if they cannot find ‘go’ neurons that are willing to talk to them.’

The researchers found that ‘go’ neurons rescue their ‘no-go’ cousins from death by blocking the function of a protein called PTEN. Mutations in the gene coding for PTEN have been strongly linked to autism, suggesting that when PTEN is not functioning properly not enough ‘no-go’ neurons die, tipping the balance of cell types and causing problems in information processing in some autistic people.

Co-lead author Dr Fong Kuan Wong the Marín laboratory at the IoPPN says: ‘As well as finding a biological process that is fundamental to brain development, our findings suggest that disruptions to this process may be fundamental to neurodevelopmental disorders. Understanding how the balance of cell types in the cerebral cortex is disrupted in conditions like autism and epilepsy could potentially lead to new treatments.’

The researchers are now investigating the consequences of having too many ‘no-go’ neurons in mice, and how this might relate to human conditions like autism.