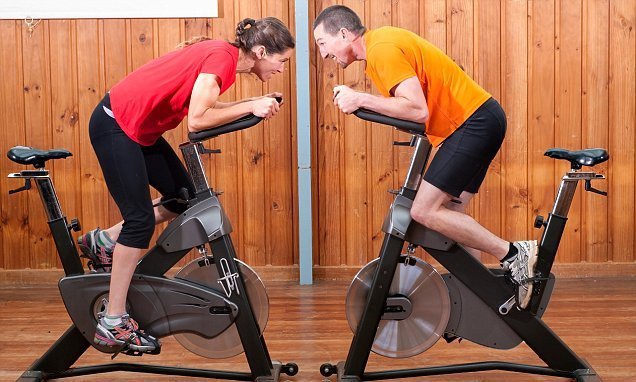 Ever since spinning freewheeled out of California in the Eighties, indoor cycling has become the fitness fad of choice for those who want to feel the burn.

Spin classes, where groups of people pedal furiously on static bikes to music as a leader calls out instructions, are big business.

There are hundreds of specialist spin studios and more than 7,000 gyms in the UK, many offering spinning to their 10 million members, according to the latest The State of the UK Fitness Industry report. 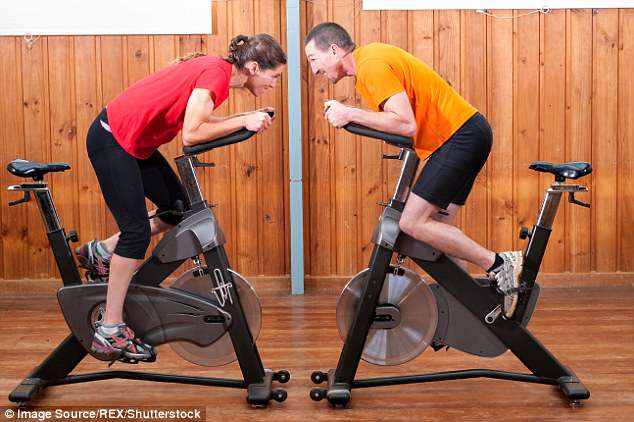 Ever since spinning freewheeled out of California in the Eighties, indoor cycling has become the fitness fad of choice for those who want to feel the burn

The draw is rapid weight loss — a session lasting 40 minutes to an hour can burn 600 calories and provide a full-body workout.

Motivational instructors, pumping soundtracks and a party vibe all add to the draw of sessions that often take place in dim light to add to the club-like atmosphere.

But while it’s one thing to finish an exercise class feeling high on endorphins with muscles aching, it’s quite another to collapse and be rushed to A&E suffering acute kidney failure.

But that’s what’s happening to an increasing number of spinning enthusiasts — particularly first-timers — who are being admitted to hospital with symptoms that resemble traumatic crush injuries.

Doctors are reporting higher numbers of patients presenting with ‘rhabdo’ or exertion-related rhabdomyolysis, due to high-intensity workouts such as spinning and CrossFit, an intensive form of training that includes elements of weightlifting, running, rowing and more. Adding to this is the fact some gyms offer introductory ‘bundles’ of classes that must be taken in a short period of time.

‘You can end up doing seven spinning classes in a week, far more than your body can take,’ says personal trainer Max Lowery, author of The 2 Meal Day.

It’s not just an anecdotal problem; studies such as one published in the Journal of the Norwegian Medical Association in 2016 reported an increase in the number of reported cases of rhabdomyolysis triggered by exercise at hospitals across Norway. And doctors say the same is happening here.

‘Exertion-related rhabdomyolysis is a growing problem and we are seeing more cases in A&E,’ says Dr Shruti Goel, a consultant in renal and acute medicine at Hillingdon NHS Hospital Trust.

Rhabdomyolysis happens when not enough oxygen reaches the cells to keep up with the demand being placed upon them. As a result the muscle tissue breaks down, releasing toxins into the blood which can seriously damage the kidneys.

In many cases this causes no symptoms, and the muscles simply ‘heal’. In fact, this is how bigger muscles are built. 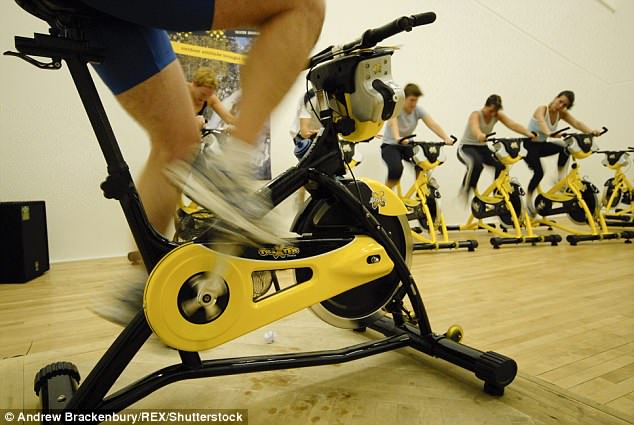 Motivational instructors, pumping soundtracks and a party vibe all add to the draw of sessions that often take place in dim light to add to the club-like atmosphere

However, if this process happens too fast or for too long, the resulting muscle breakdown releases large quantities of minerals such as potassium and phosphate (normally stored in muscle tissue). It also triggers the release of myoglobin (which carries oxygen to the muscles) into the blood, a combination which can be toxic to the kidneys and affect heart rhythms. It can progress to a medical emergency and could even prove fatal.

‘After intense exercise, the myoglobin can crystallise, causing damage and blockage of the renal tubules, leading to serious kidney injury,’ says Dr Peter Hill, a consultant nephrologist at Hammersmith Hospital in London.

In fact, in serious cases of rhabdo, someone can stop passing urine completely.

The tubules may recover after several days or weeks, but sometimes the damage is irreversible.

Initial symptoms are subtle, says Dr Hill. ‘Muscle pain and swelling which doesn’t settle quickly is one sign,’ he says. Other symptoms of rhabdo include nausea, dark urine (a bit like cola), fever, abdominal pain, nausea and vomiting.

‘Getting enough fluid into the body is the first and most important treatment and in the most severe cases doctors use bicarbonate to help flush the myoglobin particles out of the kidneys,’ says Dr Hill.

Around 4 per cent of those who develop exertion-related rhabdomyolysis go on to develop acute kidney injury — usually 12 to 24 hours after the initial muscle damage — and may need dialysis, where blood is taken out of the body and cleaned by a machine.

Having a strong social network could hold the key to preserving memory.

A study conducted in mice showed those housed in groups of seven performed better in tests of memory and had healthier brains than those that lived in pairs, reports the journal Frontiers in Aging Neuroscience.

Previous research has suggested that being social increases connections in the hippocampus important for memory function.

Rhabdomyolysis can also happen when someone is crushed, for exampled during an earthquake or car crash, and the muscle tissue is damaged. In fact, the first medical description of rhabdo came from treating people who’d been trapped under bombed buildings during World War II.

In very rare cases, it’s a side-effect of drugs such as statins.

Rhabdomyolysis as a result of over-exertion can be accompanied by compartment syndrome. Here, the damaged muscle starts to swell within the tough sheath encasing it called the fascia. In spinning this often happens to the thigh muscles as pedalling puts these under particular strain, but runners usually get it in the calf.

‘Surgery may be needed to release pressure on the muscle so that the tissue doesn’t start to die,’ says Dr Hill.

‘People talk about “smashing” their workout but end up smashing their bodies,’ adds Max Lowery.

‘I have been in gyms where clients have collapsed and been sick after spinning classes. In most cases, they are OK after a rest.

‘No one is saying spinning per se is bad, but it’s an advanced fitness regimen and not for newbies. That said, you can get rhabdo even if you’re fit, but haven’t been training or aren’t used to spinning.’

Most people who suffer exertion-induced rhabdo are first timers. In April 2017, the American Journal of Medicine published a study involving 46 people who had fallen ill after a spin class: 42 of them had been admitted to hospital after their first attempt.

Spin classes are designed to get the most out of participants, using peer pressure and loud music.

‘This can mean that people feel pressured to push themselves beyond what is comfortable,’ says Kathryn Freeland, a personal trainer and owner of Stede Court Private Fitness Retreat. 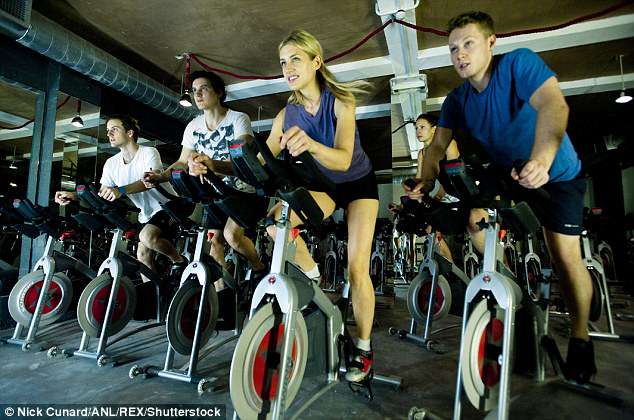 ‘Yes, you can put your bike on a lower setting, but the whole ethos is to push yourself beyond your max. People don’t realise they might be putting themselves at risk.’ Kathryn Freeland says that there is a wider culture of training to — or beyond — the limit.

‘Think of HIIT (high-intensity interval training) and the number of people competing in triathlons and ultramarathons despite relatively little training,’ she says.

‘They try to get the max out of their bodies when they are new to exercise, or to that exercise, so they go too far. They need to gradually introduce a new discipline.’

Fit people can get rhabdomyolysis if they push themselves too hard or try a new exercise that works a different muscle group.

So ARE instructors, who determine the level of intensity, aware of the risks? ‘I’ve seen good and bad instructors and unfortunately bad ones may not even have heard of rhabdo,’ says Max Lowery.

There are no set requirements for becoming a fitness instructor, although most gyms employ those with at least a certificate in Fitness Instructing. These qualifications often involve part-time courses and few touch on rhabdomyolysis. ‘There’s a wide range of abilities and knowledge levels within the fitness industry,’ says Max Lowery. ‘I’ve seen trainers who are overweight or have very poor understanding of physiology.’

He advises people getting into exercise for the first time to start with low-impact cardiovascular training such as walking or cycling combined with flexibility exercises such as Pilates or yoga. And always tell your instructor you are a first-timer so they can tailor the workout to you.

‘Do this for a couple of months and then start with spinning or other high-intensity workouts, but no more than once or twice a week so your body has time to recover.’