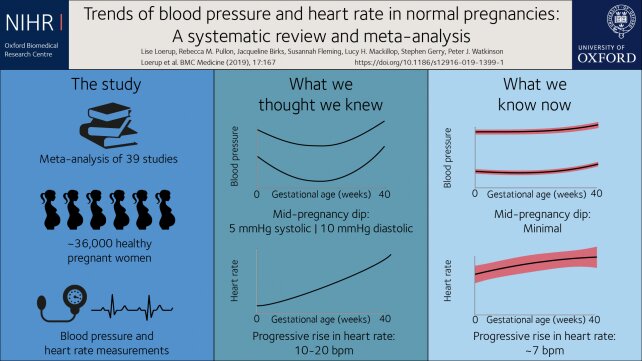 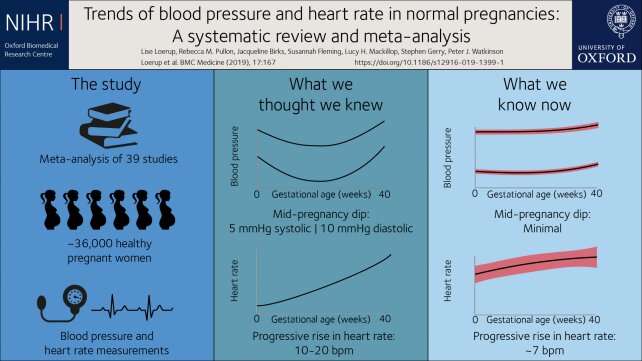 New analysis from over 36,000 healthy women in 20 countries suggests that physiological changes during pregnancy may not be as dramatic as traditionally taught. However, average blood pressures do appear to be increasing year on year.

Medical text books are based on data that is now over forty years old. New research from researchers at The University of Oxford, and published in BMC Medicine, includes much more recent data. The new findings show that changes to women’s blood pressure and heart rate during pregnancy are not as striking as previously thought.

Traditionally, medical text books have taught students that blood pressure drops by 10-15mmHg during the middle of pregnancy. These text books are based on old data and quite small numbers of pregnant women. This newer and much larger analysis shows that the lower diastolic blood pressures seen mid-pregnancy are on average just 1-2 mmHg lower than the earliest measurements that were taken in about week 10. This is much less of a drop than suggested in the text books. The analysis also shows that, on average, systolic blood pressure rises very slightly through pregnancy.

The analysis also included heart rate measures from just over 8000 women. Heart rate increases during pregnancy are also much less than previously thought. Rather than the 20-30% increase (~15-20 beats per minute) suggested in earlier publications, newer data suggest that heart rates increase by just 7-8 beats per minute. This is closer to a 10% rise.

All pregnant women should have their blood pressure and heart rate monitored when they are admitted to hospital. This helps clinical staff make decisions about when patients need additional treatment. Most UK hospitals check individual patients’ results against a Modified Early Obstetric Warning Scores (MEOWS) to monitor women during pregnancy. This is a version of the National Early Warning Score used across the NHS that has been adjusted to account for physiological changes during pregnancy. However, MEOWS differ between hospitals and use warning thresholds for blood pressure and heart rate based on expert opinion rather than evidence. This new report provides reliable evidence-based ranges of blood pressure and heart rate to allow women with worsening health to be identified more quickly and accurately, throughout pregnancy.

Dr. Lucy Mackillop, Consultant Obstetric Physician and one of the authors said: “This an important study challenging the widely held view of the expected changes to vital signs during pregnancy. This highlights the importance of evidence-based medicine to support and plan clinical care. Evidence based early warning scores specific to pregnant woman are urgently needed and this study should inform their development.”

Dr. Peter Watkinson, consultant intensive care physician and co-lead for the Technology and Digital Health research theme for the NIHR Oxford Biomedical Research Centre said: “It is really important that we understand what are normal changes during pregnancy. This new analysis allows us to identify and treat the small proportion of pregnancies where blood pressure changes are outside the normal range.”