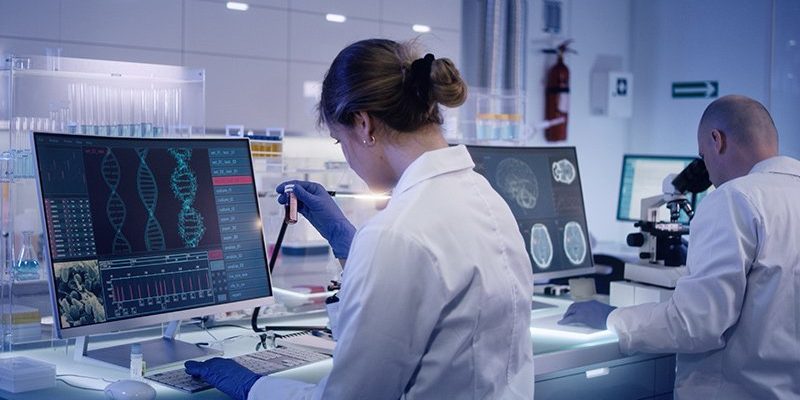 A large, retrospective study shows how germline genetic testing has evolved over time in women with breast or ovarian cancer and reveals a path forward for testing these patients.

Investigators found racial and ethnic disparities in genetic testing as well as “persistent underuse” of testing in patients with ovarian cancer.

The team also discovered that most pathogenic variant (PV) results were in 20 genes associated with breast and/or ovarian cancer, and testing other genes largely revealed variants of uncertain significance (VUS).

Allison W. Kurian, MD, of Stanford (Calif.) University, and colleagues recounted these findings in the Journal of Clinical Oncology.

Because of improvements in sequencing technology, competition among commercial purveyors, and declining cost, genetic testing has been increasingly available to clinicians for patient management and cancer prevention (JAMA. 2015 Sep 8;314[10]:997-8). Although germline testing can guide therapy for several solid tumors, there is little research about how often and how well it is used in practice.

For their study, Kurian and colleagues used a SEER Genetic Testing Linkage Demonstration Project in a population-based assessment of testing for cancer risk. The investigators analyzed 7-year trends in testing among all women diagnosed with breast or ovarian cancer in Georgia or California from 2013 to 2017, reviewing testing patterns and result interpretation from 2012 to 2019.

Before analyzing the data, the investigators made the following hypotheses:

The investigators examined genetic tests performed from 2012 through the beginning of 2019 at major commercial laboratories and linked that information with data in the SEER registries in Georgia and California on all breast and ovarian cancer patients diagnosed between 2013 and 2017. There were few criteria for exclusion.

Genetic testing results were categorized as identifying a PV or likely PV, VUS, or benign or likely benign mutation by American College of Medical Genetics criteria. When a patient had genetic testing on more than one occasion, the most recent test was used.

If a PV was identified, the types of PVs were grouped according to the level of evidence that supported pathogenicity into the following categories:

The investigators also tabulated instances in which genetic testing identified a VUS in any gene but no PV. If a VUS was identified originally and was reclassified more recently into the “PV/likely PV” or “benign/likely benign” categories, only the resolved categorization was recorded.

The authors evaluated clinical and sociodemographic correlates of testing trends for breast and ovarian cancer, assessing the relationship between race, age, and geographic site in receipt of any test or type of test.

Among laboratories, the investigators examined trends in the number of genes tested, associations with sociodemographic factors, categories of test results, and whether trends differed by race or ethnicity.

Hypothesis #1: MGP will entirely replace testing for BRCA1/2 only.

About 25% of tested patients with breast cancer diagnosed in early 2013 received MGP, compared with more than 80% of those diagnosed in late 2017.

The trend for ovarian cancer was similar. About 40% of patients diagnosed in early 2013 received MGP, compared with more than 90% diagnosed in late 2017. These trends were similar in California and Georgia.

Hypothesis #2: Underutilization of testing in patients with ovarian cancer will improve.

Among the 187,535 patients with breast cancer and the 14,689 patients with ovarian cancer diagnosed in Georgia or California from 2013 through 2017, on average, testing rates increased 2% per year.

The investigators therefore concluded that underutilization of genetic testing in ovarian cancer did not improve substantially during the 7-year interval analyzed.

Hypothesis #3: More patients will be tested at lower levels of pretest risk.

These data were more difficult to abstract from the SEER database, but older patients were more likely to be tested in later years.

In patients older than 60 years of age (who accounted for more than 50% of both cancer cohorts), testing rates increased from 11.1% to 14.9% for breast cancer and 25.3% to 31.4% for ovarian cancer. By contrast, patients younger than 45 years of age were less than 15% of the sample and had lower testing rates over time.

There were no substantial changes in testing rates by other clinical variables. Therefore, in concert with the age-related testing trends, it is likely that women were tested for genetic mutations at increasingly lower levels of pretest risk.

Hypothesis #4: Sociodemographic differences in testing trends will not be observed.

Among patients with breast cancer, approximately 31% of those who had genetic testing were uninsured, 31% had Medicaid, and 26% had private insurance, Medicare, or other insurance.

For patients with ovarian cancer, approximately 28% were uninsured, 27% had Medicaid, and 39% had private insurance, Medicare, or other insurance.

The authors had previously found that less testing was associated with Black race, greater poverty, and less insurance coverage (J Clin Oncol. 2019 May 20;37[15]:1305-15). However, they noted no changes in testing rates by sociodemographic variables over time.

Hypothesis #5: Detection of both PVs and VUS will increase.

The proportion of tested breast cancer patients with PVs in BRCA1/2 decreased from 7.5% to 5.0% (P < .001), whereas PV yield for the two other clinically salient categories (breast or ovarian and other actionable genes) increased.

Hypothesis #6: Racial or ethnic disparities in rates of VUS will diminish.

However, for both breast and ovarian cancer patients, there were large differences in VUS-only rates by race and ethnicity that persisted during the interval studied.

Multivariable logistic regressions were performed separately for tested patients with breast cancer and ovarian cancer, and the results showed no significant interaction between race or ethnicity and date. Therefore, there was no significant change in racial or ethnic differences in VUS-only results across the study period.

Where These Findings Leave Clinicians in 2021

Among the patients studied, there was:

For patients with breast cancer, the proportion of all PVs that were in BRCA1/2 fell substantially. Adoption of MGP testing doubled the probability of detecting a PV in other tested genes. Most of the increase was in genes with an established breast or ovarian cancer association, with fewer PVs found in other actionable genes and very few PVs in other tested genes.

Contrary to their hypothesis, the authors observed a sustained undertesting of patients with ovarian cancer. Only 34.3% performed versus nearly 100% recommended, with little change since 2014.

This finding is surprising – and tremendously disappointing – since the prevalence of BRCA1/2 PVs is higher in ovarian cancer than in other cancers (Gynecol Oncol. 2017 Nov;147[2]:375-380), and germline-targeted therapy with PARP inhibitors has been approved for use since 2014.

Furthermore, insurance carriers provide coverage for genetic testing in most patients with carcinoma of the ovary, fallopian tube, and/or peritoneum.

Action Plans: Less Could Be More

Since there is a substantially larger volume of clinical genetic testing in non-Hispanic White patients with breast or ovarian cancer, the spectrum of normal variation is less well-defined in other racial or ethnic groups.

The study showed a widening of the “racial-ethnic VUS gap,” with Black and Asian patients having nearly twofold more VUS, although they were not tested for more genes than non-Hispanic White patients.

This is problematic on several levels. Identification of a VUS is challenging for communicating results to and recommending cascade testing for family members.

There is worrisome information regarding overtreatment or counseling of VUS patients about their results. For example, the PROMPT registry showed that 10%-15% of women with PV/VUS in genes not associated with a high risk of ovarian cancer underwent oophorectomy without a clear indication for the procedure.

Although population-based testing might augment the available data on the spectrum of normal variation in racial and ethnic minorities, it would likely exacerbate the proliferation of VUS over PVs.

It is essential to accelerate ongoing approaches to VUS reclassification.

In addition, the authors suggest that it may be time to reverse the trend in increasing the number of genes tested in MGPs. Their rationale is that, in Georgia and California, most PVs among patients with breast and ovarian cancer were identified in 20 genes (ATM, BARD1, BRCA1, BRCA2, BRIP1, CDH1, CHEK2, EPCAM, MLH1, MSH2, MSH6, NBN, NF1, PMS2, PALB2, PTEN, RAD51C, RAD51D, STK11, and TP53).

If the Georgia and California data are representative of a more generalized pattern, a panel of 20 breast cancer– and/or ovarian cancer–associated genes may be ideal for maximizing the yield of clinically relevant PVs and minimizing VUS results for all patients.

Finally, defining the patient, clinician, and health care system factors that impede widespread genetic testing for ovarian cancer patients must be prioritized. As the authors suggest, quality improvement efforts should focus on getting a lot closer to testing rates of 100% for patients with ovarian cancer and building the database that will help sort VUS in minority patients into their proper context of pathogenicity, rather than adding more genes per test.

Lyss was a community-based medical oncologist and clinical researcher for more than 35 years before his recent retirement. His clinical and research interests were focused on breast and lung cancers, as well as expanding clinical trial access to medically underserved populations. He is based in St. Louis. He has no conflicts of interest.