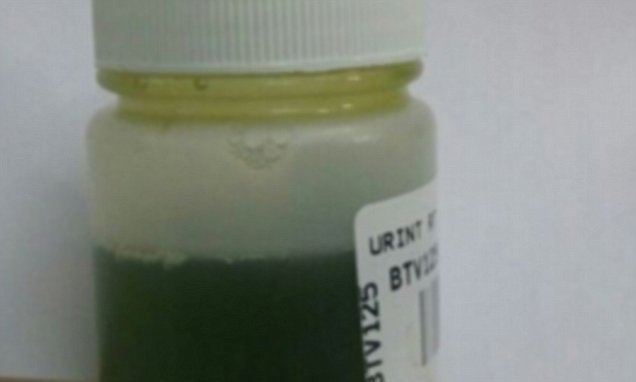 Doctors baffled after man, 30, left with GREEN urine after a car crash… only to discover it was caused by his anaesthetic!

Doctors were left scratching their heads when a man was left with green urine after a car crash.

Their initial thought was that the unnamed 30-year-old could have a UTI – but tests came back negative.

And the patient, from India, hadn’t been given any other drugs known to trigger the bizarre side effect.

They eventually found his green urine was a rare side effect of propofol – a fast-acting general anaesthetic.

Consultants in Pune, Maharashtra, were so intrigued by the incident they published it in a prestigious medical journal. 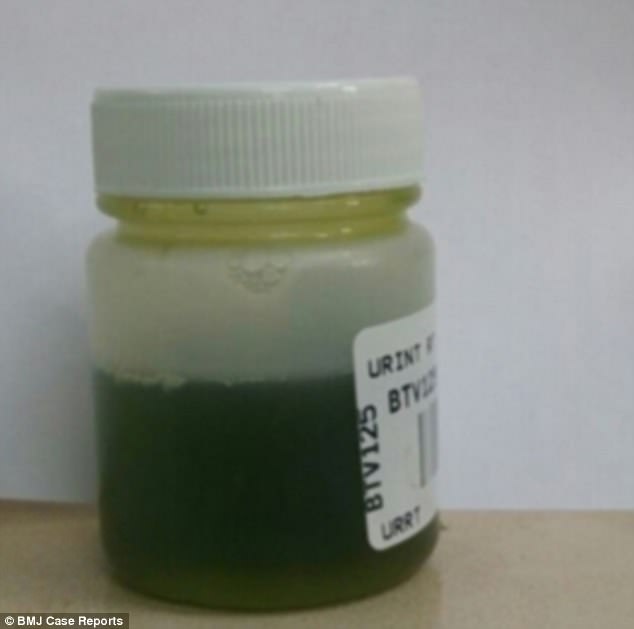 Writing in the BMJ Case Reports, the team at the Dr D Y Patil Medical College said the symptom ‘confused us’.

They added: ‘Since neither did the patient suffer from UTI nor did any of the drugs received by him were known to cause green, we suspected the intravenous infusion of propofol used for the induction of general anaesthesia would be the sole reason.

‘The urine was monitored for the next 48 –  72 hours and duly returned to its normal colour.

HOW CAN URINE BE GREEN?

There are a host of reasons why urine might be green; some benign, others more worrying.

For instance, asparagus may have this effect in some people who lack the genes to break down the pigments which give the vegetable its colour, Richard Viney, a consultant urological surgeon at the Queen Elizabeth Hospital in Birmingham and The Bladder Clinic, previously told the Mail.

‘Other explanations include consumption of food dyes or the use of drugs containing chemical compounds called phenols.’

These medicines include cimetidine, often used to treat reflux; the antidepressant amitriptyline; and an antihistamine called promethazine.

Phenols are broken down into a green compound that is excreted into urine.

Another explanation could be a urinary tract infection caused by Pseudomonas bacteria.

‘Return of the urine to its normal colour coupled with a normal urinalysis confirmed our suspicion of propofol being the cause.’

The doctors, led by Priyam Choudhury, added: ‘Green discolouration of urine is an unusual phenomena and can lead to confusion and anxiety.

‘Green urine can be associated with certain medications, dyes or UTIs.’

Medications containing phenol groups, such as propofol, are known to produce green urine.

But urine discolouration after propofol infusion is not widely known to clinicians because of its clinicians.

Although the exact incidence of propofol-induced green urine remains a mystery, it is estimated to occur in one per cent of cases.

The green colour is due to the excretion of quinol derivatives resulting from renal sulfoconjugation and glucuroconjugation.

The man was taken the hospital’s emergency room an hour after being involved in a road traffic accident.

He fractured his right arm and surgeons fixed it. They gave him the general anaesthetics fentanyl and propofol.

Nursing staff suspected a UTI when they noticed his green-coloured urine three hours after the surgery.

But a urine sample revealed he had normal liver and kidney function – ruling out a potential infection.