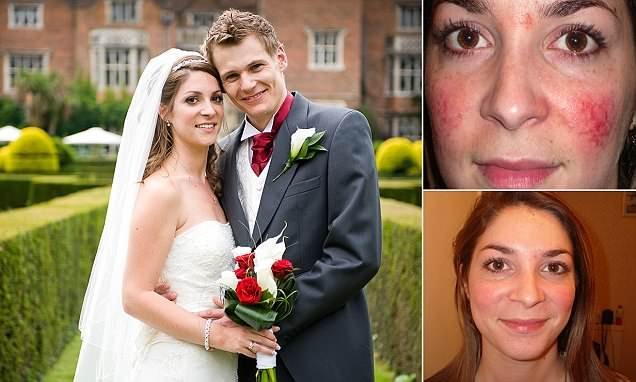 Newlywed, 36, who battled with red, blotchy skin for a decade glowed with pride on her wedding day after a cream containing CAPERS transformed her skin from problem to flawless

A newlywed glowed on her wedding day after a cream containing capers cured her of the rosacea she suffered with for more than a decade.

Amelia Andrews, 36, from Brighton, was diagnosed with the skin condition in her mid-20s, which left her miserable and too self conscious to leave the house.

As well as battering her confidence, beach-lover Ms Andrews was told to stay out of the sun completely to avoid flare ups that left with her red, swollen skin.

After trying everything from antibiotics to Chinese herbs without any success, Ms Andrews nearly lost hope until her husband David, 37, a science teacher, found a range of skincare products containing the flower buds online.

Three months after using the products, Ms Andrew’s skin was better than it had been in years and the couple are thrilled with the radiant photographs from their July 2015 wedding.

Dr Anton Alexandroff, a consultant dermatologist & British Skin Foundation spokesperson, said there is no evidence capers treat rosacea, however, they may help to reduce inflammation and the appearance of redness.

Below, Ms Andrews, a clinical researcher, shares her experience of rosacea and how she finally overcame it. 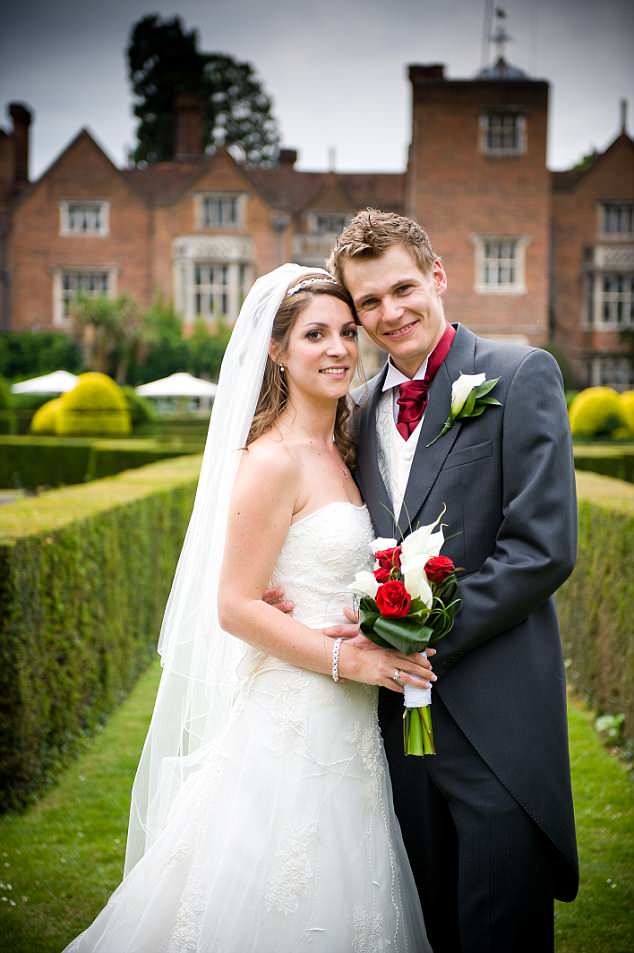 Ms Andrews’ red, pimply skin left her miserable and too self conscious to leave the house After just three months of using the cream, Ms Andrews says her skin is better than ever

DOES SCIENCE SUPPORT THE USE OF CAPERS IN ROSACEA?

‘However there is scientific data that capers can suppress inflammation and vasodilation in general, which are two major mechanisms of rosacea.

‘It is therefore theoretically plausible that capers may help to treat rosacea but further research is required to confirm this.’

‘I imagined how bad I would look in my wedding photos’

At the slightest hint of stress, sun, alcohol or rich food my skin goes red and I break out in a small spots all over my cheeks and nose.

When I was planning to get married I knew all four of these triggers were likely to be happening, so I was in a total panic about my skin and how it would react on my wedding day.

I imagined how bad I would look in my wedding photos, and in front of all my family and friends with my face red and covered in spots.

Even the thickest make-up can’t hide my rosacea when I get a bad flare up, it just makes it look worse.

And besides I wanted to look natural on my wedding day, not plastered in layers of make-up.

I was thrilled to have radiant smooth skin for my wedding day, my photos came out beautifully.

My honeymoon in Kenya and Zanzibar was also wonderful, and I didn’t need to plaster myself with make-up. 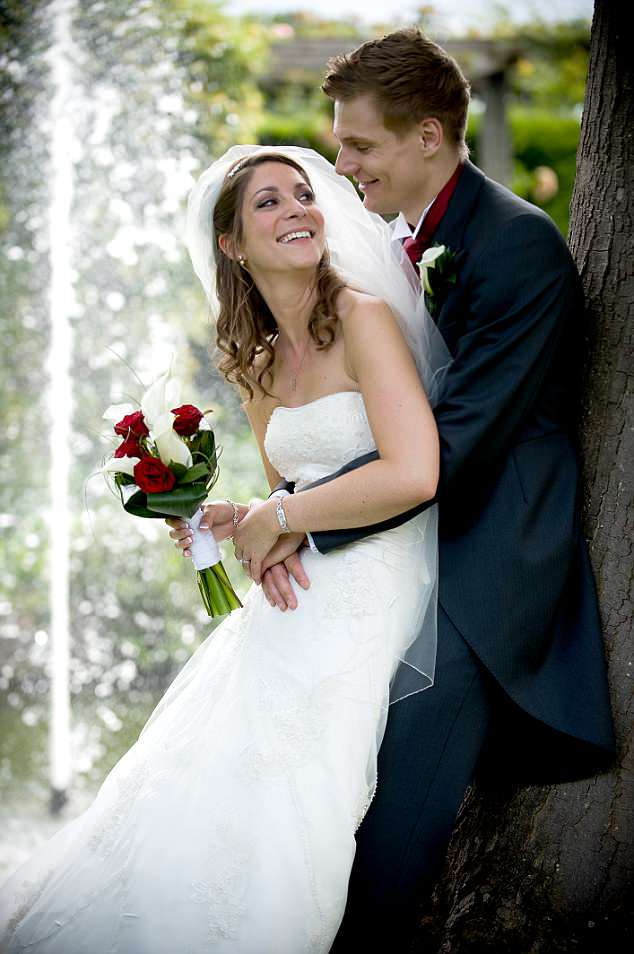 Ms Andrews (pictured before using the cream) was told to stay out of the sun to avoid flare ups. Sun seeker Ms Andrews was devastated, particularly when she was told to give up skiing

Rosacea is a common rash that affects the centre part of the face, usually in middle-aged people.

Sufferers are more likely to blush easily, which is followed by persistent redness, bumps and pus spots.

The cause of rosacea is not fully understood.

Many think it occurs due to blood vessels beneath the skin dilating too easily.

It is more common in fair-skinned women.

Are there other symptoms? And how is it treated?

As well as affecting their appearance, rosacea sufferers may also experience:

There is no cure.

‘My skin was permanently red’

I first developed rosacea in my mid-20s, with my symptoms becoming really severe when I turned 27.

I’ve always been a really easy blusher, which is apparently one of the first signs of rosacea.

Maybe it was the additional stress of my job, or just my increasing age, but the symptoms just kept getting worse.

My skin started being permanently red, and I would frequently get crops of horrid little spots across my cheeks and nose like a rash.

‘I was told not to go in the sun at all’

It took me a while to realise the sun was a major problem for my skin.

I love sunbathing and beach holidays. It upsets me that my skin gets worse when I am on holiday, rather than better.

Even skiing holidays cause flare ups with the harsh weather conditions.

After a holiday when my flare up got particularly bad I went straight to see a dermatologist where I was diagnosed with rosacea and told not to go in the sun at all.

You can imagine that as a sun lover and beach-holiday enthusiast, as well as a keen skier, this came as something of a shock.

As I was young they tested me for lupus as that can give you a red rash on your face but that came back negative and then they diagnosed rosacea.

I was prescribed oral and topical antibiotics but neither worked.

I also tried an omega-three oil that was supposed to be good for your skin but that did not work either, as well as just about every cleanser for sensitive skin on the market. 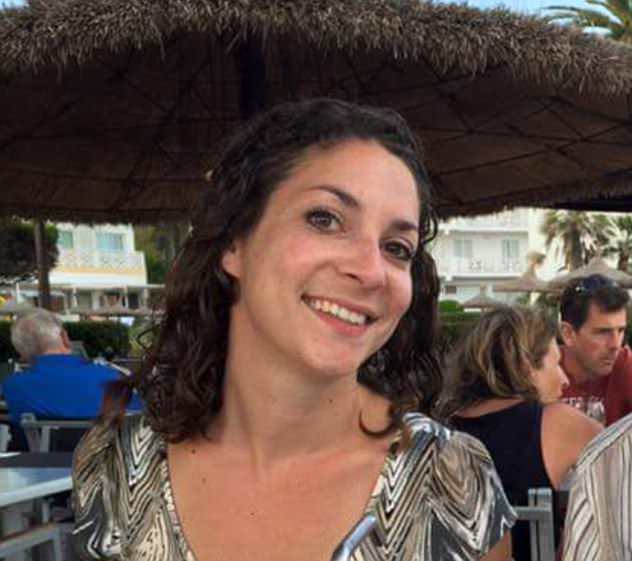 Ms Andrews (pictured after) says the redness, bumpiness and break outs have disappeared

Over the years dealing with this condition, I have become increasingly miserable about the state of my skin, as nothing ever seemed to clear it up.

When my rosacea was at its height, I didn’t like to step out of the house without make-up on because I was so self conscious.

Luckily I met David 16 years ago at university, which was before my rosacea got bad.

He has always been very supportive but my rosacea still affected my confidence when we went out.

I’d spend ages putting my make-up on before I’d be ready to leave and I always worrying about what people might say.

‘My skin is the best it has been in years’

We’d never seen anything before that contained capers for rosacea and the positive reviews seemed genuine.

I used the products daily and saw small improvements in the first month but the full extent of the results were seen after about three months.

By then my skin was the best it had been in many years. The redness and bumpiness had virtually gone and I wasn’t really getting many spots at all.