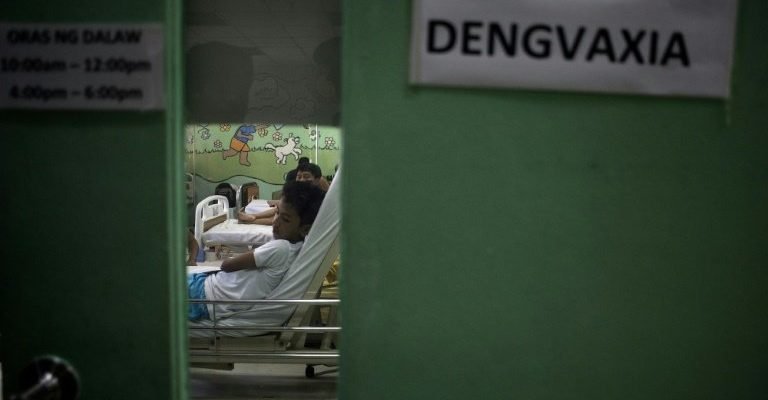 Melinda Colite shakes with rage as she clutches a photo of her grandson, who she says died after getting the anti-dengue fever vaccine at the heart of a bitter scandal in the Philippines.

While Dengvaxia’s maker Sanofi has said unequivocally that its world-first vaccination is safe, Philippine authorities disagree publicly over whether it could have contributed to children’s deaths.

The resulting confusion has prompted a dangerous plunge in vaccination rates in the Philippines for other diseases.

It has also added to a swirling political battle, fanned by bloggers who back President Rodrigo Duterte and have an audience of millions of Facebook followers.

“The blame game has taken over the main issue,” Ronald Mendoza, dean of the Ateneo de Manila University’s School of Government, told AFP. “It may be doing damage to public health rather than protecting it.”

Health authorities have said child vaccination rates against illnesses like measles have dropped by as much as 25 percentage points over the previous year as public anger and mistrust has grown in the Dengvaxia case.

Several measles outbreaks have struck the nation, claiming at least 13 lives, since the controversy began.

The trouble started last year, shortly after the Philippines gave Dengvaxia to some 837,000 students as part of a public immunisation campaign.

Sanofi hailed the vaccine as a breakthrough in combating dengue, which kills hundreds in the Philippines every year, mostly children.

But the company set off a panic when in November it said a new analysis showed the vaccine could lead to more severe symptoms for people who had not previously been infected with dengue.

It prompted Manila to halt the campaign and left hundreds of thousands of terrified parents wondering if their children were at risk.

Sanofi has repeatedly said the vaccine is safe, noting in a March statement: “No causal-related deaths were reported in 15 countries after clinical trials conducted for more than a decade with 40,000 subjects involved.”

“There continues to be no evidence that any deaths have been causally linked to our vaccine,” it added.

But that has not stopped allegations emerging of vaccinated children dying of super-charged cases of dengue after getting Dengvaxia.

“It could not have been anything else. He started complaining of frequent body aches after his third injection,” Melinda Colite, 55, said of her 12-year-old grandson Zandro.

As of last week 65 deaths have been reported to authorities and are under investigation, the health department says.

Different branches of the Philippine government have disagreed openly about potential risks of the vaccine, leading to confusion for the public.

“We cannot conclude at this point that Dengvaxia directly caused the deaths,” Health Secretary Francisco Duque told lawmakers in February, referring to the cases of 14 children who received the vaccine.

However, after additional potential cases emerged, the government assigned its legal service that represents the poor, the Public Attorney’s Office, to take up the matter.

Its chief lawyer, Persida Acosta, told lawmakers in February: “They (death certificates) said they were (killed by) acute respiratory arrest, encephalitis, appendicitis, septic shock. All of those are mimics of severe dengue.”

Certainty about the children’s cause of death may remain clouded because post-mortem diagnosis of dengue can be a tricky process.

The most accurate and widely used way of testing, called RT-PCR, relies on genetic material that degrades quickly after a person dies, especially in warm climates like the Philippines, virus expert Benjamin Neuman told AFP.

“The challenge of determining a cause of death by RT-PCR can swiftly move from difficult to impossible,” he added.

It is also unclear if this type of testing has been used in the cases under investigation.

Supporters of the president have been eager to assign blame for the Dengvaxia scandal to his predecessor, Benigno Aquino, who has criticised Duterte’s deadly anti-drug crackdown.

Though the vaccination campaign was approved and launched under Aquino’s administration, it continued for a time under Duterte.

Well-known blogs have posted entries calling for Aquino to be jailed and questioned whether the vaccine is a “time bomb”.

Ruth Jaime, whose 12-year-old grandson Alexzander died due to a blood infection months after his last dose of Dengvaxia, says the situation is clear for her.

“Of course no one will admit what caused his death,” said the fishmonger in her home west of Manila.