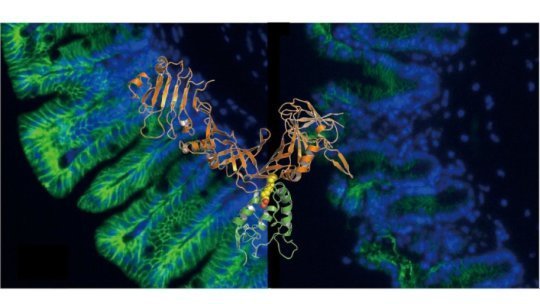 Researchers from the University of California, Irvine and Harvard University have discovered how the Clostridium difficile toxin B (TcdB) recognizes the human Frizzled protein, the receptor it uses to invade intestinal cells and lead to deadly gastrointestinal infections. The findings, published today in Science, could pave the way for new C. diff antitoxins and also show potential for the development of novel anti-cancer drugs.

In a C. diff infection (CDI), TcdB targets colonic epithelia and binds to what are called Frizzled (FZD) receptors. Researchers in the labs of Rongsheng Jin, PhD, professor of physiology & biophysics from the UCI School of Medicine, and Min Dong, PhD, from Boston Children’s Hospital — Harvard Medical School, found that during this binding process, the toxin locks certain lipid molecules in FZD, which block critical Wnt signaling that regulates renewal of colonic stem cells and differentiation of the colonic epithelium.

“This toxin is indeed very smart. It takes advantage of an important lipid that FZD uses for its own function, to improve its binding affinity and specificity to FZD,” said Jin, “However, the need for this lipid also exposes a vulnerability of TcdB that could be exploited to develop antitoxins that block toxin-receptor recognition.”

Jin and Dong believe that the novel FZD-antagonizing mechanism exploited by toxin B could be used to turn this deadly toxin into a potential pharmacological tool for research and therapeutic applications, including anti-cancer drugs.

The team’s preliminary data show that a non-toxic fragment of TcdB that they identified could significantly inhibit the growth of some cancer cells with dysregulation in Wnt signaling. A patent application has been filed.

Clostridium difficile, also called “C. diff,” causes severe gastrointestinal tract infections and tops the Center for Disease Control and Prevention’s list of urgent drug-resistant threats. Clostridium difficile infection has become the most common cause of antibiotic-associated diarrhea and gastroenteritis-associated death in developed countries, accounting for half-million cases and 29,000 deaths annually in the United States. It is classified as one of the top three “urgent threats” by the CDC.