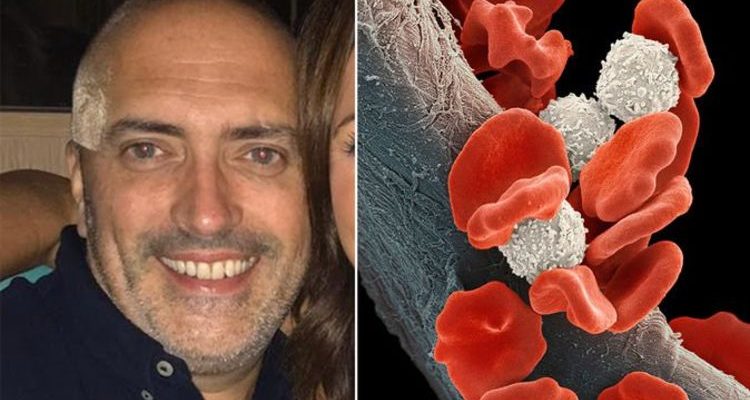 The signs and symptoms of blood cancer

For months, McGovern, 47, put his persistent nagging ache in his ribs down to overexertion. After all, he reminded himself that he was too old to be “mucking around” in the garden with his daughters. But as the unrelenting pain soon spread to his back, it became clear this went far beyond the usual twinges and niggles of middle age.

It would take a year back and forth with his GP and a severe bout of pneumonia and pleurisy for doctors to realise something was seriously wrong. When it finally came, the diagnosis was a complete shock: Dave had myeloma, an incurable blood cancer.

“It was worse than anything I’d imagined,” recalled McGovern, who lives in Edinburgh with his wife and two daughters, aged 10 and 15 respectively. “I didn’t think it was anything more than a bone problem, right up until the last couple of weeks. I’d gone to the doctor a number of times. They never suspected anything. I guess no-one had joined the dots. And then, finally, I got an X-Ray in March time because I had pneumonia and pleurisy.

“The respiratory specialist ordered a series of blood tests that my GP did, somewhat reluctantly I have to say. After a couple of days, he phoned me, somewhat sheepishly, with the news that it was something serious. If I hadn’t had an infection, I’m not sure they would have found.”

Affecting over 24,000 people in the UK, myeloma originates in the bone marrow and can be hard to detect. Despite being the third most common type of blood cancer, symptoms including pain, easily broken bones, fatigue and recurring infection, are often linked to general ageing or minor conditions.

More than half of patients face a wait of over five months to receive the right diagnosis and around a third are diagnosed through an emergency route.

Whilst it is incurable, myeloma is treatable in the majority of cases, if spotted early enough. Treatment is aimed at controlling the disease, relieving the complications and symptoms it causes, and extending and improving patients’ quality of life.

McGovern started treatment a week after his diagnosis in April 2021. He was among the first patients in Scotland to receive the newly-approved quadruplet combination therapy known as DVTD.

He is also due to undergo high-dose therapy and stem cell transplantation in the coming weeks. While he has responded well to treatment so far, his terminal diagnosis and rounds of intense treatment have taken a toll both physically and emotionally. The inevitability of relapse weighs heavy on his mind.

“Mentally it’s tough,” he admits. “To have an incurable cancer, that’s playing on my mind. There is no prognosis, everyone reacts to the treatment differently. Not knowing when it’ll come back and how aggressive it will be when it comes back, it’s been hard. You’re in limbo for quite a long time. How we all mentally manage it, without a prognosis, is going to be a challenge, I think.”

McGovern’s only regret, he confides, is not trusting his instinct something was amiss and pressing his GP for answers.

Edinburgh-based charity Myeloma UK spoke to Express.co.uk about pressing ahead with its Don’t Miss Myeloma campaign this month to raise awareness of the tell-tale signs of blood cancer. They aim is to ensure patients receive a timely diagnosis and get a chance at a few more precious years with their loved ones – 74 percent of people diagnosed with myeloma every year are over 65.

Suzanne Renwick, Head of Clinical Practice Services at Myeloma UK, told Express.co.uk: “GPs play a major role in myeloma diagnosis. However, they might be unsure about the signs of myeloma, the tests to request or when to refer patients to haematology. The difficulty for healthcare professionals and patients alike is that myeloma is a relatively rare blood cancer and its symptoms are vague and not specific.

“With no lump, no single symptom or a single place to scan it is notoriously difficult to diagnose. As myeloma advances, it becomes more difficult to treat and more likely to cause complications, such as kidney failure and spinal compression.”

Early diagnosis is key to ensuring myeloma patients have the best possible treatment options and quality of life. Renwick ensured that it is why Myeloma UK’s main goal this Blood Cancer Awareness Month is to support and educate GPs and healthcare professionals, so they do not miss myeloma.

Wrangling with the looming threat of relapse, McGovern often feels as though myeloma has not only taken over his body but encroached on every aspect of his life. Being diagnosed with an incurable illness can be all-consuming.

The key, he insists, is not to let it: “I try to keep active and keep busy; not to the point that I’m ignoring it, but you can’t let it consume you. You have to force yourself to go for a walk, force yourself to do things that are mentally challenging. Don’t let it be the only thing that defines you.”

If you have one or more of the following symptoms – it’s time to see your GP:

Myeloma UK is the only organisation in the UK exclusively dedicated to myeloma and related conditions with an ultimate goal to find a cure and make myeloma history. Until then, their mission is to help every patient live well with myeloma for as long as possible.