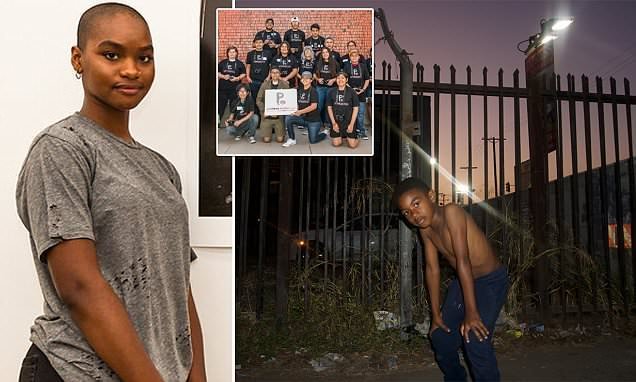 Cancer through the eyes of children: Incredible photos by young patients offer heart-wrenching insight into how they cope with the disease

Nadja has been in front of the camera since she was 11, but it wasn’t until she was 15 and battling cancer that she realized the power of taking pictures.

In one of her photos, Nadja’s younger brother, Cash gives the camera a mischievous look.

Cash is looking at her behind the lens the way she wishes everyone had while she was battling cancer at just 15: like the person she’d always been, his big sister.

Nadja is one of the 23 teenagers and young adults in the Pablove Foundation’s advanced ‘Shutterbug’ photography class.

The course puts a (free) camera in the hands of each of its members and coaches them on how to use the medium to cope with and express their ‘cancer journeys.’

This month, Nadja’s photo of her brother hung in a gallery show, and some 250 visitors got to see the world through the eyes of her and her classmates, not just as cancer patients, but as creative kids. 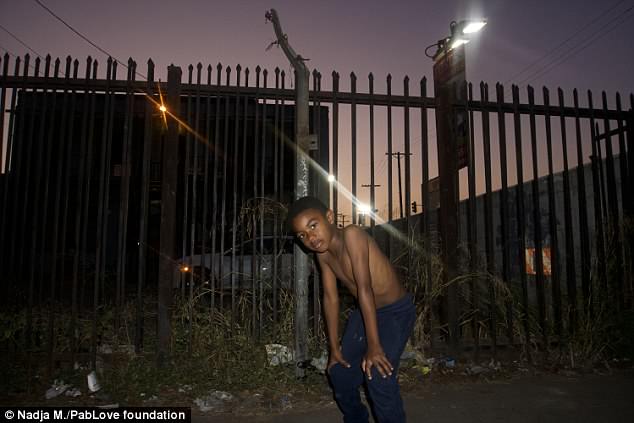 Nadja M’s picture of her little brother, Cash, hung in a show of photography done by the Pablove Foundation’s Shutterbugs, children, teenagers and young adults with cancer

And one of those guests bought the print right off of the gallery wall. Their check as well as all of the proceeds from the show were donated by the Pablove Institute right back into research on childhood cancer.

Every year, some 15,000 children are diagnosed with cancer in the US.

It’s a horrifying number, but the disease is still rare in children and often leaves its sufferers feeling alone, isolated and lacking an outlet for their thoughts and emotions.

After Pablo Thrailkill passed away at just six from a rare childhood cancer called a Wilms tumor in 2008, his parents were unsure what to do to cope until they found hundreds of photos their son had taken.

‘It became clear to them that while Pablo was battling cancer, he was using photography as a tool for healing,’ explains Ashley Blakeney, who manages the programming for Pablove’s Shutterbug classes.

The discovery inspired the creation of the Pablove, an art education program for children with cancer that began in Los Angeles, California, and now offers classes in eight cities across the US. 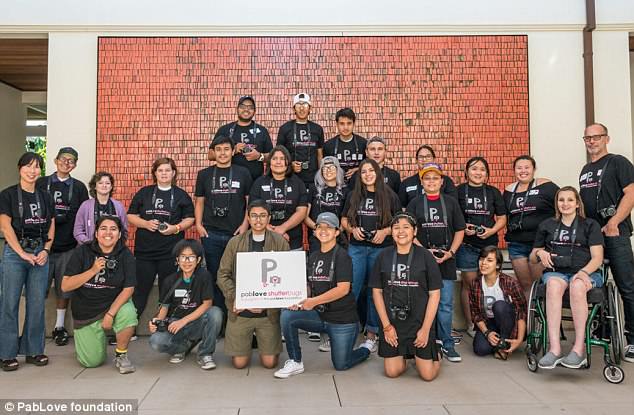 The parents of Pablo Thrailkill founded Pablove after their son died of cancer at six. Now the program gives free cameras and photography lessons to thousands of children with the disease across the country

The classes are completely free, provide each student with a camera and pair them with a photographer to mentor them.

When it began, its ‘Shutterbug’ photography program recruited children of all ages and operated with the motto ‘cancer isn’t invited to this party.’

In other words, photography and bonding with peers going through a similar struggle were meant to help distract these kids from their diagnoses while teaching  them a creative skill.

But just as Pablo had been, many of the older students were drawn to subjects that explored their cancer diagnoses, rather than ignoring them.

‘They had a desire to really talk about their journey, so we wanted to make sure we were creating programming that would allow for them to explore in a way that really took into account the student voice and kept in perspective whatever they think would be helpful for them in this process,’ Ashley says. 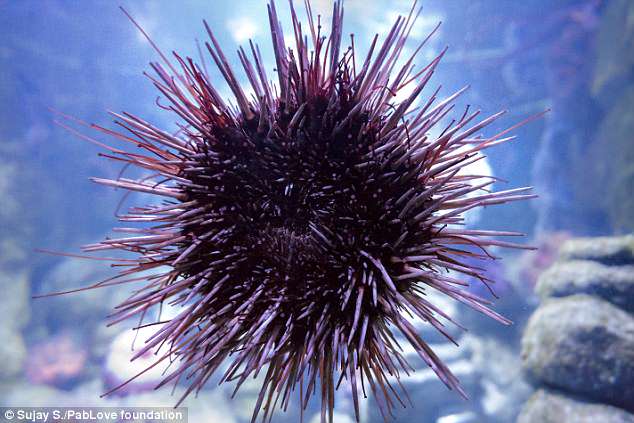 Sujay S captured this vivid image of a flower which hung at a gallery show of the students’ artwork earlier this month in Los Angeles, California 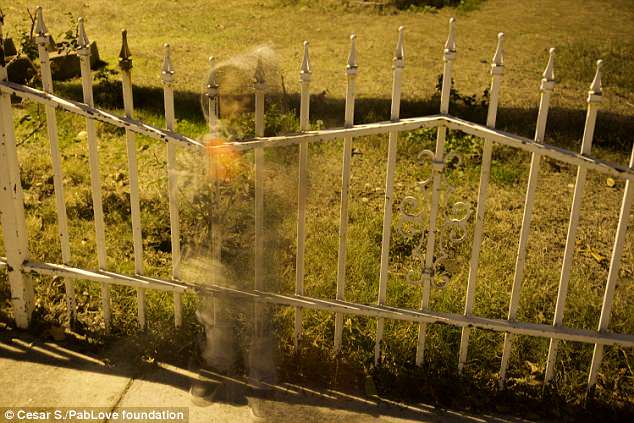 Some of the program’s older children explored darker topics and thoughts through their photography as they coped with cancer, as Cesar did in his photo, entitled Can You See Me?

For this advanced Shutterbug class, Pablove provided the kids with better technology (through a partnership with Sony) and taught them more in-depth lighting and composition techniques.

But they also put the students in groups so that they could talk closely with their peers who were also going through cancer, assigned them writing exercises and fostered discussions to help them cope with their diagnoses, all as part of ‘art healing.’

This was exactly what Nadja, now 16, needed – even if she didn’t realize it at the time.

‘It was exciting because I got to hang out with other kids my age that had been through the same thing, health-wise,’ Nadja says. 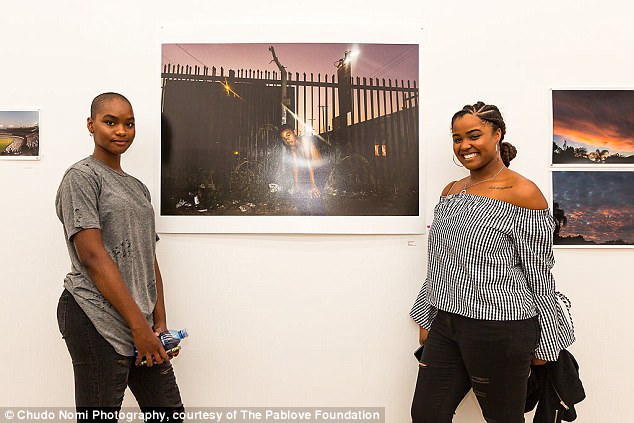 ‘We not only had to share with each other in small groups, but we had to write about our experiences. It’s hard for me to get personal because I hadn’t really talked about  my personal experience in so much depth with other people, and it felt good to do that with other people and know that they were feeling the same things.’

Photography, her conversations with other Shutterbugs and her little brother, Cash were the three things that most eased the isolation Nadja felt while she was battling Hodgkins lymphoma at just 15.

‘I can understand the over-protecting, but cancer changed the way that people acted toward me,’ Nadja says.

‘But my relationship with my brother stayed the same.

He was just six when I was going through treatment, and he was sympathetic to what I was going through, but out of everyone that was in my life, he was the one that treated me the same. We still laughed and joked around and we still got onto each other.’

Cash even celebrated his sixth birthday in the hospital with Nadja. That was the last time she got to eat cake before she started chemotherapy. 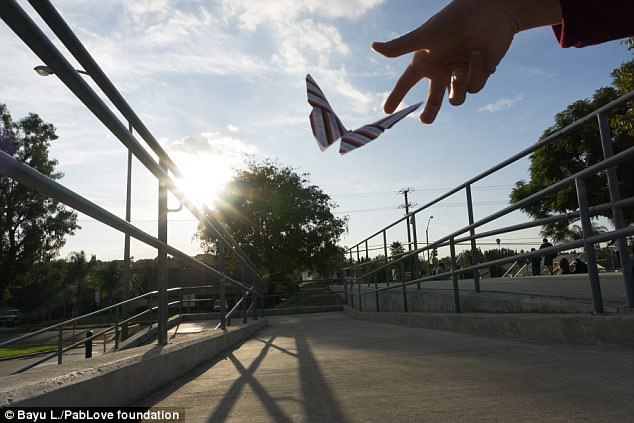 Others, like Bayu L, photographed whimsical images of hope 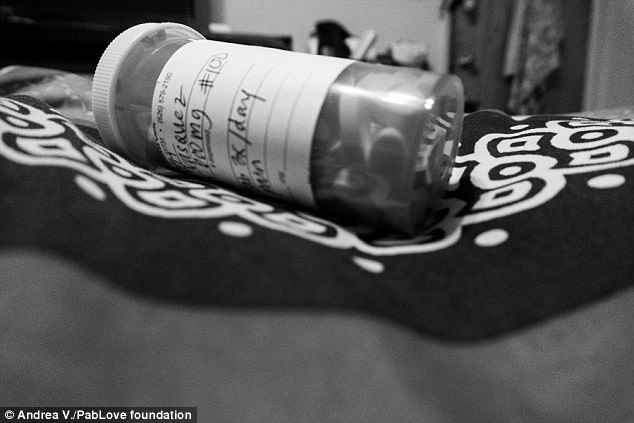 The Pablove Foundation started its advanced class when it saw that older students gravitated to images that grappled with cancer, like Andrea V’s photo of her medication 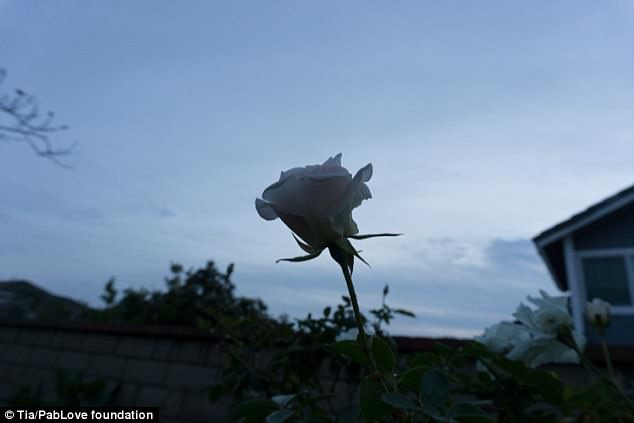 ‘While I was going through treatment, I was kind of in this state where I was just feeling like the sick girl all the time,’ she says.

‘The program made me feel like I could do so much more and like I am so much more than just a girl with cancer. During the process, it gave me something else to do and let me explore a new part of myself, so I’ve come to really like photography,’ Nadja says.

Nadja is now in remission, and proud that she has her photography to show for her battle.

Even though Nadja has been modeling and acting for years, when it came time to show her work, she was a bit anxious.

‘I’m not even going to lie, I was really nervous at the gallery show. It was the first thing i’d done something for a public audience, I was like “are they really going to come? Who will be there? Are they going to like my pictures?”‘ Nadja says.

But the show, which the students curated and named ‘Behind the Diagnosis, was a hit, and so was her photo, which sold for $280.

All of the proceeds from the show will go to funding research on childhood cancers. Last year, all of the grants that the Pablove Foundation gave out were wholly funded by the sale of its students’ prints.

‘I turned out amazing, seeing my picture displayed on the wall, and having pepole want to me talk to me about my picture and how much they loved it was really reassuring for me,’ Nadja says.

‘Not just that someone bought me, but that my art was appreciated that much, made me feel really good.’