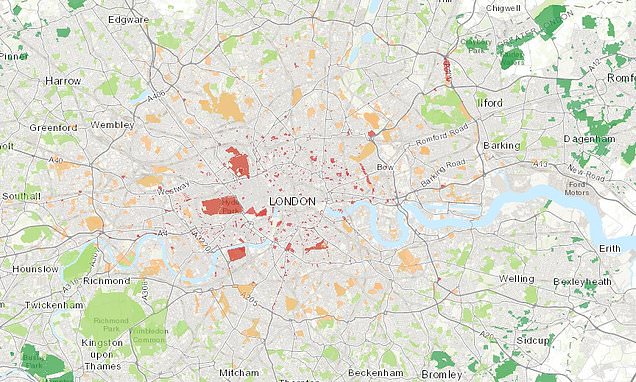 London’s air pollution crisis revealed: More than a QUARTER of the capital’s parks, playgrounds and open spaces exceed safety limits for air quality (so, how bad is YOURS?)

London’s air pollution crisis was today laid bare by a shocking interactive map that reveals how poor the air quality is in your local park.

A damning report has revealed more than a quarter of green spaces in the capital breach international nitrogen dioxide (NO2) thresholds.

Scientists have now expressed a ‘genuine concern’ for the health of Londoners after they analysed the air quality of 4,470 parks across the capital’s 33 boroughs.

Bustling tourist hubs such as Hyde Park, Kensington Gardens and Regent’s Park are among the most polluted places and all exceed the 40 µg/m3 per year limit imposed by both the European Union and World Health Organisation.

But people living in deprived areas are also among the hardest hit, with average NO2 levels substantially higher than the most affluent streets.

Children are particularly at risk, with the closest play space for 250,000 under 16-year-olds breaching the international threshold of NO2 – a poisonous emission produced mainly by cars but also from factories and even wood-burning stoves.

See how polluted your local park is below 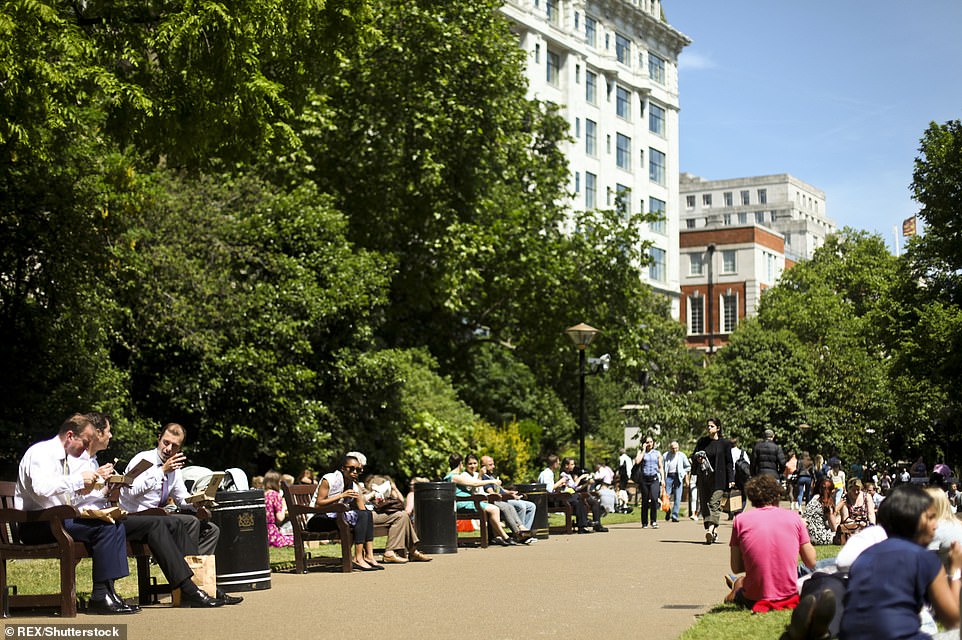 Victoria Embankment Gardens has the highest NO2 level of 59.7 µg/m3, breaching the EU’s 40 µg/m3 per year limit

But the scientists, from Imperial College London and the University of Leicester, also warned that the elderly and those with poor health are disproportionately affected.

Some 24 per cent of playgrounds and 27 per cent of public parks burst through the 40 µg/m3 per year pollution cap.

City of London, Westminster, Camden, Kensington and Chelsea and Islington are the five boroughs with the highest level of nitrogen dioxide.

Victoria Embankment Gardens has the highest NO2 level of 59.7 µg/m3, followed by Parliament Square Gardens – in the shadow of the Palace of Westminster – at 58.7µg/m3.

Dr Daniela Fecht, from the MRC Centre for Environment and Health within Imperial’s School of Public Health, said: ‘Dangerously high levels of nitrogen dioxide are a genuine concern for people living in the capital, especially for those with children, the elderly and those with poor health. 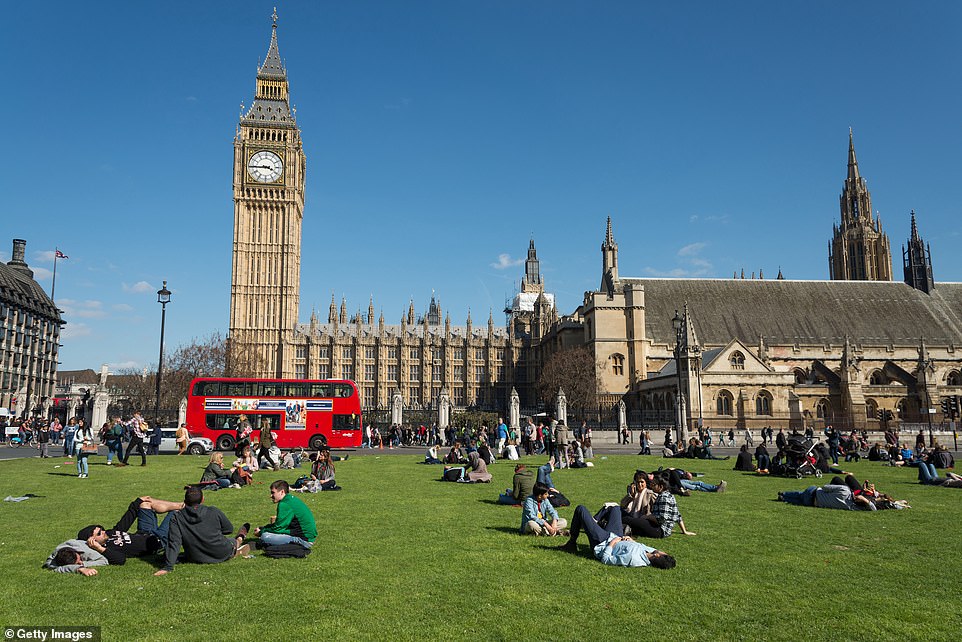 Parliament Square Gardens – in the shadow of the Palace of Westminster – has  a staggering 58.7µg/m3 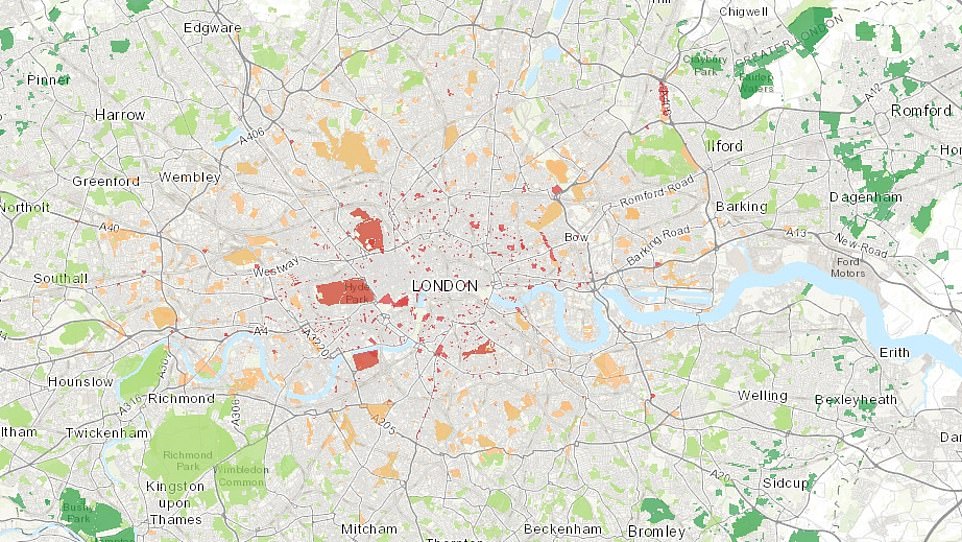 What is Nitrogen Dioxide (NO2)?

Nitrogen dioxide is a pollutant which in London is predominately emitted from vehicles.

However, it is also produced from wood-burning stoves, and other domestic, commercial and industrial sources.

Prolonged exposure to high levels of NO2 can damage the lungs and in children is linked to conditions such as asthma, reduced lung growth and even reduced brain function.

Previous studies estimated the effects of high levels of background NO2 in the environment as being as bad for children’s lungs as maternal smoking.

The authors highlight in their study that the concentrations of NO2 steeply declines with distance from source, so levels in the centre of a large park are likely to be far lower than at the edge, close to a road.

‘We know already that hundreds of primary schools and nurseries are located within, or very close to, areas that exceed legal safety limits for NO2, potentially putting children’s long-term health at risk, but we may think our green spaces are clean.

‘Our research shows this is often not the case, with a large number of public and private parks in the capital exceeding legal limits for harmful air pollutants.’

The scientists also found that poorer areas of the city had disproportionately polluted parks and playgrounds.

Average NO2 levels for open spaces in the most deprived areas were 6 µg/m3 higher than the average for the most affluent places.

The researchers coupled this information with data from the 2011 census to ascertain the number of children under the age of 16 in close proximity to green spaces.

A jaw-dropping 67 per cent of private parks strayed outside the international air quality levels. 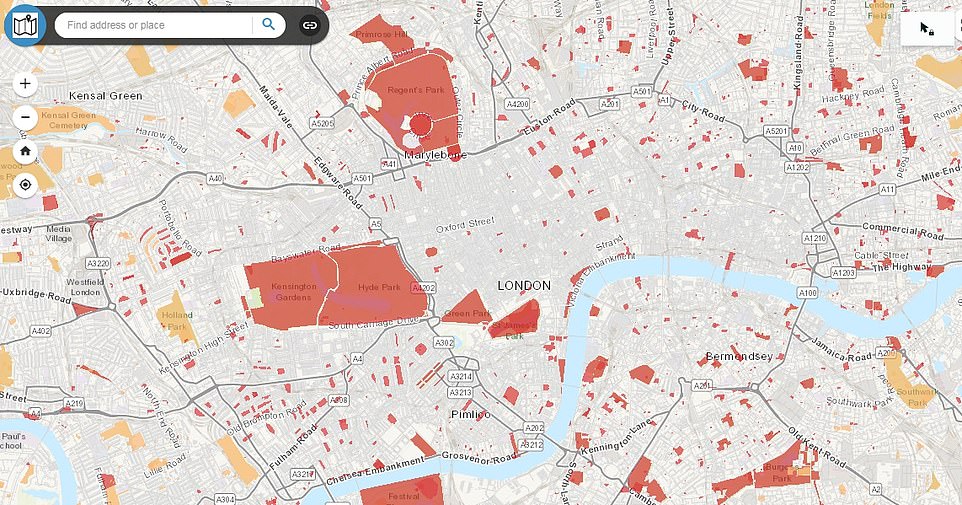 Bustling tourist hubs such as Hyde Park, Kensington Gardens and Regent’s Park are among the most polluted places and all exceed the limits imposed by both the European Union and World Health Organisation

Dr Laure de Preux, from Imperial College Business School’s Centre for Health Economics and Policy Innovation and co-author on the report, said: ‘We call London’s green spaces the “lungs of the city”

‘But increasingly we are seeing that these lungs are being poisoned by air pollution and not enough is being done about it.

‘These latest findings help us to quantify the risk from average nitrogen dioxide exposure, by mapping exactly which areas are exceeding safety and legal limits.

‘We hope this work will help to highlight those areas that can benefit most from mitigation by local authorities and the Mayor of London to reduce air pollution, protecting the health of residents and children.’

Lucy Facer, a co-founder of Islington Clean Air Parents, said: ‘I’m absolutely horrified by the results of the study. As a mother of two, I spend hours every week in the park with my children.

‘It’s so important for them to be outside and exercising. Politicians must act urgently so that children don’t have to breathe toxic air while playing outside.’

WHAT HAVE RECENT STUDIES SHOWN POLLUTION CAN DO TO OUR HEALTH AND BODIES?

CAUSE CHILDREN TO HAVE A LOW IQ: Researchers at the University of California, San Francisco, found in May 2019 that children born to mothers who live in polluted areas have an IQ that is up to seven points lower than those living in places with cleaner air.

CAUSE CHILDREN TO HAVE POORER MEMORY: Researchers at the Barcelona Institute for Global Health found boys exposed to greater levels of PM2.5 in the womb  performed worse on memory tests by the time they are 10.

DELAY THE DEVELOPMENT OF CHILDREN: Youngsters who live less than one-third of a mile away from busy roads are twice as likely to score lower on tests of communication skills in infancy, found researchers at Eunice Kennedy Shriver National Institute of Child Health in April. They were also more likely to have poorer hand-eye coordination.

MAKE CHILDREN MORE ANXIOUS: University of Cincinnati scientists claimed pollution may alter the structure of children’s brains to make them more anxious. Their study of 14 youngsters found rates of anxiety was higher among those exposed to greater levels of pollution.

CUT YOUR CHILD’S LIFE SHORT: Children born today will lose nearly two years of their lives because of air pollution, according to a report by the US-based Health Effects Institute and the University of British Columbia in April 2019. UNICEF called for action on the back of the study.

RAISE A CHILD’S RISK OF AUTISM: Researchers at Monash University in Australia discovered youngsters living in highly polluted parts of Shanghai have a 86 per cent greater chance of developing ASD. Lead author Dr Yuming Guo said: ‘The developing brains of young children are more vulnerable to toxic exposures in the environment.’

CAUSE ASTHMA IN CHILDREN: Four million children around the world develop asthma each year because of road traffic pollution, a major study by academics at George Washington University estimated. Experts are divided as to what causes asthma – but exposure to pollution in childhood increases the risk by damaging the lungs.

MAKE CHILDREN FAT: University of Southern California experts found last November that 10 year olds who lived in polluted areas when they were babies are, on average, 2.2lbs (1kg), heavier than those who grew up around cleaner air. Nitrogen dioxide pollution could disrupt how well children burn fat, the scientists said.

LEAVE WOMEN INFERTILE EARLIER: Scientists at the University of Modena, Italy, claimed in May 2019 that they believe pollution speeds up ageing in women, just like smoking, meaning they run out of eggs faster. This was based on them finding almost two-thirds of women who have a low ‘reserve’ of eggs regularly inhaled toxic air.

RAISE THE RISK OF A MISCARRIAGE: University of Utah scientists found in January that pregnant women are 16 per cent more likely to suffer the heartbreak of a miscarriage if they live in areas of high pollution.

RAISE THE RISK OF BREAST CANCER: Scientists at the University of Stirling found six women working at the same bridge next to a busy road in the US got breast cancer within three years of each other. There was a one in 10,000 chance the cases were a coincidence, the study said. It suggested chemicals in the traffic fumes caused the cancer by shutting down the BRCA genes, which try to stop tumours growing.

DAMAGE A MAN’S SPERM: Brazilian scientists at the University of Sao Paulo found in March that mice exposed to toxic air had lower counts and worse quality sperm compared to those who had inhaled clean air since birth.

MAKE MEN MORE LIKELY TO HAVE ERECTILE DYSFUNCTION:  Men who live on main roads are more likely to have difficulty getting an erection due to exposure to pollution, a Guangzhou University in China study suggested in February. Toxic fumes reduced blood flow to the genitals, tests on rats showed, putting them at risk of developing erectile dysfunction.

RAISE THE RISK OF PSYCHOSIS: In March, King’s College London scientists linked toxic air to intense paranoia and hearing voices in young people for the first time. They said uncovering exactly how pollution may lead to psychosis should be an ‘urgent health priority’.

MAKE YOU DEPRESSED: Massachusetts Institute of Technology researchers found in January that that the more polluted the air, the sadder we are. Their study was based on analysing social media users in China alongside the average daily PM2.5 concentration and weather data where they lived.

CAUSE DEMENTIA: Air pollution could be responsible for 60,000 cases of dementia in the UK, researchers from King’s College London and St George’s, University of London, calculated last September. Tiny pollutants breathed deep into the lungs and enter the blood stream, where they may travel into the brain and cause inflammation – a problem which may trigger dementia.