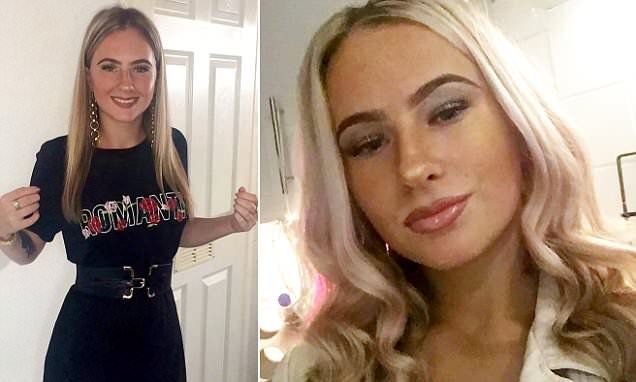 Teenager, 18, has ‘died twice’ and is fighting for her life after a common cold turned into sepsis and left her in a coma

An 18 year-old woman from Shropshire is being kept alive by a life support machine after a what she thought was a cold turned out to be life-threatening sepsis.

Whitney Martin, a waitress from Telford, Shropshire, is battling for her life in an induced coma after she became deathly ill overnight.

She was rushed to hospital when symptoms worsened, after which her heart stopped twice – and doctors discovered she has sepsis and heart disease.

Whitney’s mother, Suzanne Burford, 38, has quit her job as a carer to be by her daughter’s side at Wythenshawe Hospital in Manchester.

‘It has just been a living hell and every mother’s worst nightmare,’ Ms Burford said.

But the family are hopeful Ms Martin will make a full recovery after her heart started to beat on its own again – which the doctors say is ‘a small miracle’ – and she has been taken off one of the two life support machines. Whitney Martin, 18, was due to start a job as a waitress in a local pub the day after she was taken ill

Ms Martin thought she simply had a cold when she was left bed-ridden with flu-like symptoms around three weeks ago.

But she was rushed to Princess Royal Hospital in Telford after her condition worsened and her illness began attacking her vital organs on May 4.

Ms Burford said: ‘It was usual flu-like conditions such as tiredness and being hot and cold and we thought she was just being a bit of a drama queen.

‘She was a fit and healthy girl and we never expected what was to come next.

‘On the Friday her blood pressure was too low and her temperature was sky high – I took one look at her and knew I had to get her to a hospital.’

Within 24 hours medics wanted to transfer Ms Martin – who had been due to start a job as a waitress at a local pub – to a hospital in Birmingham because they thought she might die. 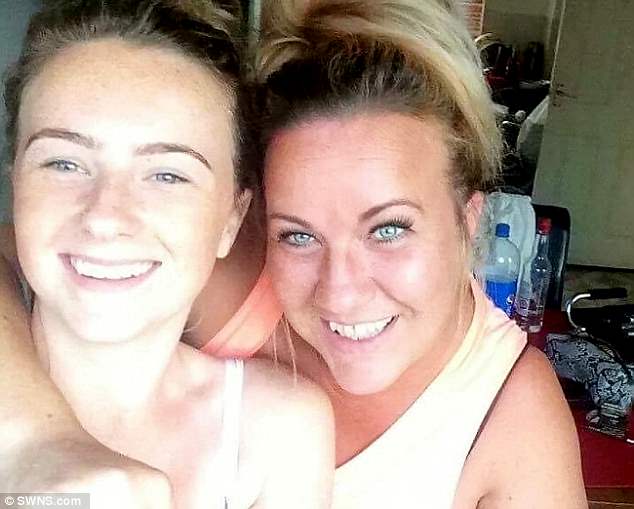 Ms Martin pictured with her mother, Suzanne Burford, who has quit her job as a carer and is living in a bungalow on the hospital site to be near her daughter 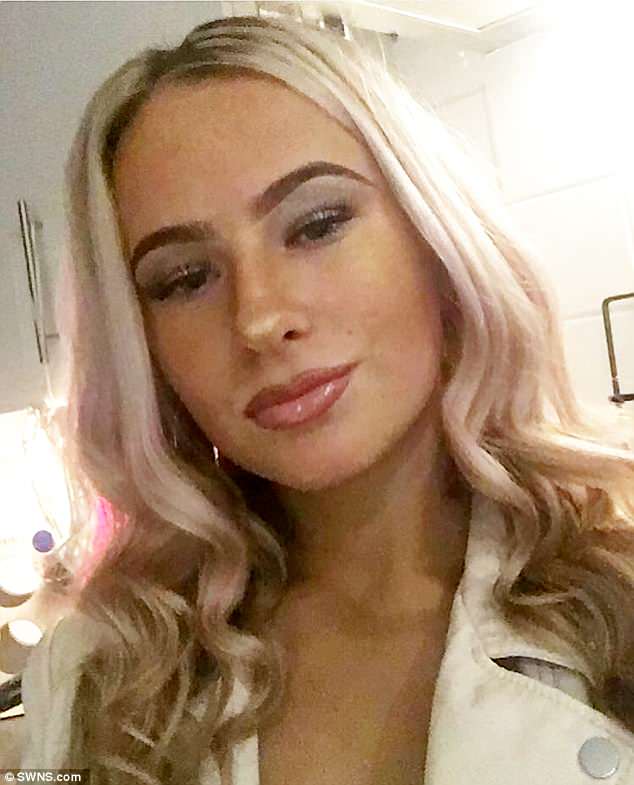 Her family said Ms Martin was a ‘fit and healthy girl’, and the sudden illness was a total shock

However, there were no beds available so she was sent to Manchester, where she was taken straight into intensive care and put onto two life support machines because her heart was failing.

Ms Burford added: ‘Her heart stopped twice. She technically died twice on the operating table and she only had a 50/50 chance of survival.

‘But they did an incredible job and she was put on two life support machines and placed into an induced coma.’

Sepsis, also known as blood poisoning, is a rare but serious complication of infections, and if untreated can lead to fatal organ failure.

Anyone can develop the infection but those with weak immune systems, serious illnesses or wounds, are more at risk, as well as people who have just had surgery and the very young and old. Ms Martin is now in an induced coma and relying on a life support machine to breathe for her.

She has been diagnosed with myocardiopathy – a condition which causes the heart muscle to become enlarged or rigid, making it less able to pump blood.

She was placed in a BiVAD machine, an implantable pump designed to help the heart function better when both sides of the heart are failing.

She was also hooked up to an ECMO machine, which uses an artificial lung to oxygenate the blood outside the body.

Although Ms Martin’s condition remains life-threatening, her family remain hopeful she can pull through after she started showing signs of recovery this week. 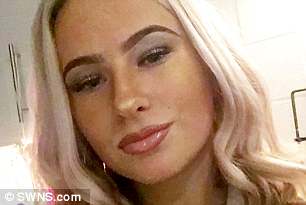 Ms Martin lives at home in Telford with her mother, her brother Luis, 20, and her mother’s partner Kevin, 42

Ms Burford, who lives at home in Telford with her daughter, her son Luis, 20, and her partner Kevin Davidson, 42, is now living in a bungalow on the hospital site.

She said: ‘Whitney is now off one of the machines after her heart started working independently of the BiVAD machine, which the consultant had said is a small miracle.

‘We are just hoping for the best now, she has picked up but I could still potentially be here another six, nine or 12 months until after Christmas they are telling me.

‘The doctors and nurses have just been amazing and I cannot thank them enough for what they have done for Whitney so far.

‘We are just praying she carries on fighting because we’ve always said Whitney cannot live without me and I can’t live without Whitney – she is my little mini me.’

Sepsis can be treated in hospital and many people make a full recovery and, although cardiomyopathy cannot be cured, treatment can control symptoms and complications. 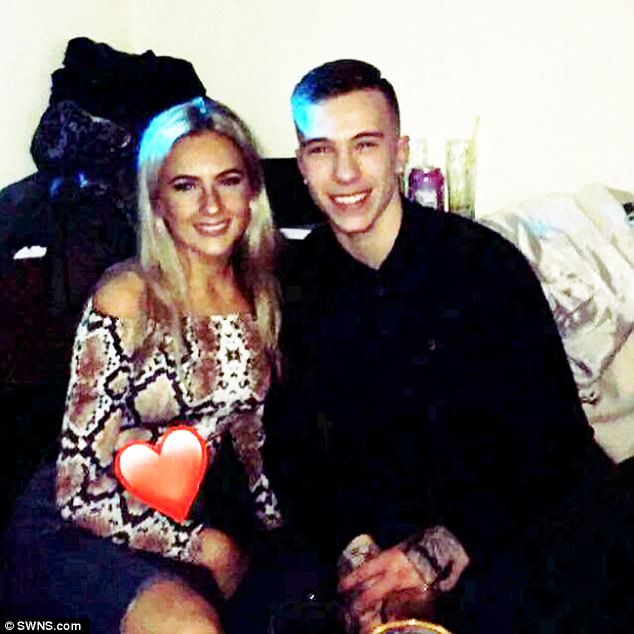 Ms Martin, pictured with brother Luis, 20, was ‘so young and full of life,’ her grandmother has said. The family are now ‘living day by day’

Ms Martin’s grandmother, Wendy Burford, added: ‘As a family we’re living day-by-day as everything is now down to chance.

‘It has been such a shock to everyone as Whitney was so young and full of life. We are remaining hopeful that Whitney will pull through and wake up soon.

‘Her mother, Susan, has been so strong throughout it all.

‘She’s had to give up her job in order to care for and visit Whitney in hospital. Manchester is quite a way and affording to travel on a regular basis is tiring and very expensive.’

In people with sepsis the body attacks its own organs and tissues.

Symptoms include slurred speech, shivering, confusion and severe breathlessness. It can occur in both children and adults and can be life threatening when left undetected.

Sepsis, also known as blood poisoning, occurs when the body reacts to an infection by attacking its own organs and tissues.

Worldwide, someone dies from the condition every 3.5 seconds.

Sepsis has similar symptoms to flu, gastroenteritis and a chest infection.

Symptoms in children are:

Under fives may be vomiting repeatedly, not feeding or not urinating for 12 hours.

Anyone can develop sepsis but it is most common in people who have recently had surgery, have a urinary catheter or have stayed in hospital for a long time.

Other at-risk people include those with weak immune systems, chemotherapy patients, pregnant women, the elderly and the very young.

Treatment varies depending on the site of the infection but involves antibiotics, IV fluids and oxygen, if necessary.