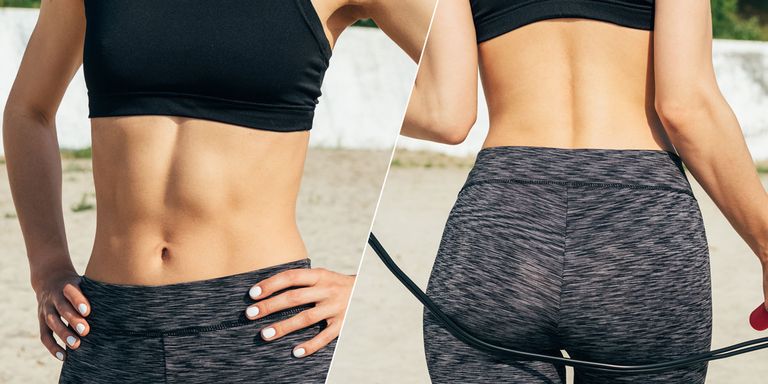 Because most people need to consume more food to build a bubbly booty, and less to see sculpted abs, it’s not exactly easy to sculpt an amazing ass and six-pack simultaneously, according to registered dietitian Christopher Tuttle, a certified personal trainer and International Federation of Bodybuilding and Fitness coach.

His best advice for those who seek results ASAP is to focus on one goal at a time: “First build muscle, then cut body fat at a later date while you maintain what you’ve worked for with exercise,” he says, citing the same advice he gives his clients leading up to body-building competitions. Here’s how to get own your goals on track:

Eating for An A+ Ass

“If you want to build a butt, you have to lift something,” Tuttle says, referring to body-weight workouts and, once you’re strong enough, squats and lunges with weights. “But you also need to eat adequate calories.”

Amp up your butt workouts without ample food intake, and you’re wasting your time: “You can’t build a butt out of nothing,” says registered dietitian Robin Barrie Kaiden, who’s also a certified personal trainer. “You need to eat protein to build muscle.”

Although protein isn’t dose dependent — you don’t get bigger muscles from eating more meat — Kaiden says if you work out about an hour a day, you need about 1.8 grams of protein per kilogram of body weight — about one gram more than is recommended for the average person, but less than the 2.3 to 3.1 grams of protein per kilogram the International Society of Sports Nutrition (ISSN) recommends for professional body builders. (Just divide your weight in pounds by 2.2 to get your weight in kilograms.)

The source of protein is less important than the quantity: “You just need the grams,” she says, insisting protein bars and powders, which can be convenient, are no superior to whole foods such as fish and chicken.

In addition to protein, which should make up between 15 and 40 percent of your daily calories, you might need more carbs than you think, Kaiden says.

That’s because your muscles only grow bigger when they have enough fuel to both soldier through weight-training workouts and repair the resulting muscle damage — and carbs are your body’s favorite power source. “You won’t have enough energy to exercise without eating enough carbs,” she says, adding that 40 to 65 percent of your daily calories should come from whole grains like brown rice and oatmeal, which beat processed carbs like white bread and sugary snacks.

Healthy fats — think avocado and olive oil — should make up the last 20 to 40 percent of your calories, since they’re essential to every cell in the body regardless of your gym goals.

If you can’t handle percentage points, just keep it simple. “Eat real food — and more of it than you’d think,” Kaiden says.

And remember that glute gains are made in the gym, not the kitchen. “Even if you eat a perfect diet, your body won’t change,” Tuttle says. For that, you need exercise — and patience. “It could take five months to put on five pounds of muscle,” he says. It’s ever the more reason to start lifting heavy now.

To really see your core muscles pop, Kaiden says, you may need to minimize belly fat. “You can change the shape of your body from exercise alone, but fat loss is mostly about diet,” she says — mostly because it takes so much time and effort to burn enough calories to make a dent in your body’s fat stores.

Although amping up your cardio can help create a calorie deficit, you’ll also need to gradually cut back on starchy foods. (For his clients, Tuttle prescribes meals that consist roughly of 40 percent protein, 30 percent carbs, and 30 percent fat, but recommendations are individualized and range widely, even among professional body builders.)

That said, don’t eliminate carbs altogether — you need it to fuel workouts! — and remember your best intensions to lose belly fat could all be for naught, since genetics determine where body fat is stored (and sacrificed): “You can never spot reduce,” he says.

Lucky for carb lovers, another way to help your core muscles come out is to nip superficial bloating in the bud. Gastrointestinal issues such as constipation and insufficient water intake can also impact the appearance of your belly, Kaiden says.

Eating enough fiber from foods like fruits, vegetables, and whole grains can help you sidestep distention. Most women should shoot for about 25 grams per day, which you can get from about 3 cups of veggies (4 grams each), two pieces of fruit (4 grams each) and one cup of whole grains such as oatmeal or barley (about 5 grams).

If your diet falls short in this department, gradually increase fibrous foods as you amp up your fluid intake to three to four liters per day to minimize any initial bloating that proceeds improvements in digestion, she suggests.

It’s also smart to avoid inflammatory foods like processed foods with added sugars, saturated fats, artificial sweeteners, and refined carbs, according to Kaiden. To that end, she recommends keeping sodium intake below 2,000 milligrams per day to prevent fluid retention. “The more real foods you eat, the better off you’ll be,” she says.

The good news: There’s no need to outlaw any specific foods for the sake of awesome abs. “When you can’t eat something, you obsess over it,” says Tuttle, who tells his clients it’s cool give into cravings for carbs or other treats on the weekends. (It’s actually helpful to mix things up, lest the body get used to low-carb, low-calorie living, and slow your metabolism in response, he says — and research on intermittent fasting appears to support the theory.)

If dietary changes don’t appeal to you, there’s always the gym: “Regular, vigorous training can make your core muscles bigger, which expands the surface area of your midsection to distribute fat better and make you look more muscular,” Tuttle says. He recommends moves like hanging leg raises, medicine ball crunches on a Swiss ball, and cable rope crunches. As soon as you can complete more than 50 consecutive reps of any one move, add weight to keep up the intensity, he says.

Strategically timing meals can keep your energy levels up while strength training FTW or creating a calorie deficit. It all begins with breakfast, which helps you stockpile energy for the rest of the day, Tuttle says.

To that end, he suggests eating four to six small meals rather than just three larger ones: “Eating similarly sized meals with equal amounts of protein at least four times a day can help you maintain muscle mass and promote recovery,” he says. “The gaps between breakfast, lunch, and dinner are just too long,” he says. And as for snacking? “When you fill your car with gas, you don’t get one-fourth of a gallon, you fill up and go.” The same applies to fueling your body with frequent, balanced meals.

When it comes to scheduling food intake around workouts, don’t stress too much. “Eating within a certain time period after your workout won’t make a difference unless you’re training more than once a day,” he says, since evidence of benefits for non-athletes is mixed. “If every meal has roughly the same amount of protein and calories, you don’t have to worry about pre- and post-workout nutrition.”

If all of this overwhelms you, take it one step at a time. “If you’re doing nothing, then start doing something,” Kaiden says — even if it’s admitting the body you’ve got ain’t all that bad.