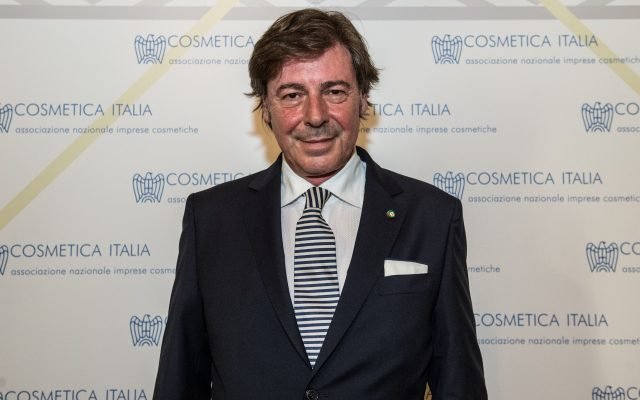 MILAN — Cosmetica Italia, the Italian association of cosmetics companies, has named Renato Ancorotti its new president for a three-year term through 2021.Ancorotti succeeds Fabio Rossello, who was elected in 2011 and confirmed for a second term in 2014. During Rossello’s tenure, Cosmetica Italia assumed its current name, switching it from Unipro.“The trust the other entrepreneurs have put in me makes me proud to represent this industry and its companies for the next three years,” said Ancorotti, who appointed L’Oréal Italia’s François-Xavier Fenart, Bottega Verde’s Benedetto Lavino and Pink Frogs’ Matteo Locatelli as vice presidents.Born in Crema in 1956, the entrepreneur founded Ancorotti Cosmetics with his daughter Enrica in 2009. The company began specializing in high-tech mascara, soon expanding to other makeup and skin-care products developed for international cosmetic labels.As the organization’s new president, Ancorotti aims to affirm the importance of the cosmetic industry for the country’s overall economy and reputation; to defend the image and quality of the Italian beauty companies and promote the internalization of the whole sector.“Considering the political facts, there are several threats to face,” Ancorotti said, referencing the local political instability and global events as possible duties on Italian cosmetic goods exported to the U.S.“A commercial war among evolved, democratic nations just shows the weakness of a country’s industry, as this is not able to compete on a global scale ” said Ancorotti, referring to the American tug-of-war with Europe and China.Regarding the domestic scenario, Ancorotti hopes and “wish our new government to be forward-looking,” urging the implementation of laws favoring the companies’ growth. In addition, he underscored that the revolving door of politicians in the Parliament will open to “a new and tough activity of accreditation for our industry.”During the public assembly, the president also shared the final figures on the industry’s performance in 2017.Last year, sales of Italian cosmetic goods totaled 10.9 billion euros, up 3.9 percent compared to the previous year, with projections forecasting a further 4.5 percent increase in 2018.In particular, exports were a major force, with sales climbing 7.1 percent to 4.6 billion euros. France, Germany and the U.S. were the first three export destinations of Italian beauty goods, accounting for 12.9 percent, 11.2 percent and 9.1 percent of the total exports, respectively.Domestic consumption also increased 1.7 percent to 6.3 billion euros, with the report highlighting consumers’ new shopping habits that made direct sales, including e-commerce channels, grow 8.7 percent compared to 2016.Nevertheless, the prime channels for beauty sales were mass distribution, perfumeries and pharmacies, accounting for 41.2 percent, 19.9 percent and 18.5 percent, respectively, of the total distribution.Along with these figures, the organization released the eighth beauty report, assembled with Rome’s Ermeneia research center.The annual study focused on investigating the relationship beauty companies have with banks and financing systems, spotlighting that in the last 12 months, cosmetic firms requested credit mostly for investments. This points to Italian beauty players’ commitment to innovation, in which they invest an average of 6 percent of their revenues annually — twice as much as national companies operating in other industries.“Change is the only way to move forward and grow a business,” said the chairman of the industry’s dominant cosmetics supplier, Intercos Dario Ferrari, who attended Cosmetica Italia’s public assembly.“Private equities have changed our life. You can consider them as early dividends and they are partners that transparency,” he continued, adding with a laugh, “I could do an IPO even tomorrow, and I would be alright.”As reported, last year, Intercos sold a minority stake to Ontario Teachers’ Pension Plan. Following the agreement, Ontario Teachers’ Pension Plan holds 20.59 percent of the company. L Catterton’s holding company CP7 Beauty Luxco Sàrl accounts for 33.75 percent of Intercos, while Ferrari’s Dafe 4000 and Dafe 5000 holdings account for 31.93 percent and 12.27 percent of the firm, respectively.“’Smart is beautiful’ is an outdated concept: either you grow or you die,” echoed Ancorotti, who also agreed on companies becoming more transparent through the participation of private equities. “A firm gets more valuable as it is measured in all its performances.”Nevertheless, Ferrari underscored private equities are “useful, but they don’t help you in the business, just with the finance.”The beauty report shows the three main reasons for a credit request include updating or enhancing machineries and technology; implementing industrial projects to expand existing laboratories, or build new plants and developing sales points, showrooms or logistic facilities abroad.Ferrari stressed “innovation and globalization” as pillars for the future growth of his company and the industry, in general. “It is essential to know the customers, understand what they want and anticipate their needs.…We have really disrupted the beauty industry. Now offer services, not only production.”Alongside, he also highlighted the importance of a cultural change. “Sometimes I notice people that were doing fine within the company, no longer fit in. Times are changing. I always ask myself if I’m doing enough for my employees.…Of course, I could have done more, but the truth is there’s not much to do. Not only the entrepreneur has to change, but also the people, and this quickly.”“We have a long journey ahead, but Italy can do more, we have a unique network but unfortunately still few Italian beauty brands.…We need to help companies to go outside ” Ferrari concluded, expressing his satisfaction for Ancorotti’s appointment and praising his “international vision that can bring Italy outside our national walls. There’s much work we have to do.”