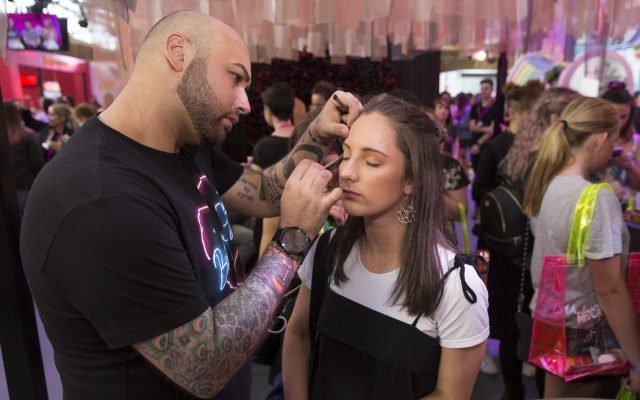 MELBOURNE, Australia — There was no Beyoncé at Meccaland but the crowds, screams and dancing might have suggested otherwise.Put together by Mecca, the leading premium cosmetics retailer in Australia, the three-day festival — an Instagram-fest come to life — was the first consumer beauty event of its kind in Australia. Gathering 25 cosmetic brands and beauty influencers like Heidi Hamoud, Sammy Robinson and Shannon Harris, the festival had snapshot-ready sets at every turn. Stila put together a confetti-filled inflatable igloo; MAC had a Dance Dance Revolution station; YSL a tattoo parlor, and more.Held on the outskirts of the city, the event got off to a sunny start on the Friday but it was typical Melbourne weather — gusty and gray — on day two. It didn’t seem to bring down the crowd’s spirit too much as they waited patiently outside for their session time to begin, or at least it all was quickly forgotten once doors opened to reveal the welcoming party: red-sequinned dancers, staffers, and drag queens whooping over confetti blasts. The crowd streamed in — dashing off to nab limited edition products, jump in line to meet their favorite makeup vlogger, or head to the main stage to listen to highlighter blending techniques. Doughnuts, coffee, cotton candy and tacos kept people’s energy up as beauty junkies flocked to see the booths.”It’s entertainment for our customers,” said Marita Burke, Mecca’s head of marketing and brands. “It’s probably younger than if you were to take a snapshot of the customer in store. Lots of friends, lots of sisters, lots of mothers and daughters.”https://www.instagram.com/p/Bhm4uOgHrQH/?hl=en&tagged=meccalandIn total, Mecca was expecting 10,000 people to attend. Tickets, at 59 Australian dollars, or $45.89 at current exchange, each, had sold out within an hour of going on sale to the public weeks earlier, although the groups were staggered into three-hour slots. Judging from one session on the Saturday, nearly all of the visitors had some form of face glitter.”Festivals used to be about floral head bands, it’s now about glitter,” Burke said, referencing a comment from one of the social media stars earlier in the day. “It’s a really interesting parallel how beauty has inserted itself into so many more conversations than it has historically. It’s now playing into the heartland where fashion has functioned.”Vlada Haggerty, Smashbox’s “lip editor in chief,” noted that the level of devotion to beauty is deeper than ever. Known for her intricate lip art designs, she said such techniques have ceased to be a trend and are becoming a common, if not quite everyday, look.”I think that every makeup artist tries it and see what they can do. Maybe not in the office but it’s much more normal to try it,” she said.A big draw for festivalgoers were the twists brands put on their usual product lineups. Drunk Elephant and Hourglass created mini travel-sized kits of some of their top performers, and Stila created a special glitter just for Meccaland, for example.https://www.instagram.com/p/Bhm0ISlHezl/?hl=en&tagged=meccalandSteve Kassajikian, the global makeup artist for Urban Decay, had only just exited the main stage after doing a classic smokey eye tutorial featuring the brand’s petite Naked Heat palette. “I’ve been dancing, rolling around, crawling,” Kassajikian said, perspiration kept at bay by Urban Decay’s trusty workhorse setting spray.He was not exaggerating either. Earlier he had been jumping and sashaying around, as a crowd formed a circle around him shouting “Go, Steve! Go, Steve!””Meccaland is bringing out the fun crazy in me,” he said. “You immediately are smiling, the energy is so infectious. Beautycon and iMats, it’s very different. This is the first time where a retailer has created their own world and brought their top brands in. It’s a very cool environment to be in.”Brands had to be quick on their feet to make sure they could cater to customers on a mission, who were aware of just how much there was to take in over a three-hour period.”Everybody is pretty well researched and knew what they could find here,” said Chanel Temple, resident artist for Hourglass, who had flown in from Los Angeles for the event.”We are seeing people coming up and grabbing what they want. It’s a madhouse, got to get to each stage as quickly as possible,” she said. “It’s two or three minutes . It’s fast. We are doing application, of course, and showing them what we have to offer here today but everybody knows what they’re wanting.” https://www.instagram.com/p/Bhl9Z7rFMjT/?hl=en&tagged=meccalandMost people seemed to have budgeted 100 Australian dollars and up to spend, with younger Gen Z girls as willing to spend — or in some cases outspend — older beauty fanatics.Lily and Gidget, 15, both from Melbourne, were first in line at the meet-and-greet with Shani Grimmond.”I like her personality and she makes me laugh,” said Lily. Wearing winged silver eyeliner, they’d each done their makeup using one of Grimmond’s tutorials and had brought 200 Australian dollars with them.Elsewhere at the festival, 17-year-old Ashley had brought 150 Australian dollars. “Other than that I’ll go broke,” she said.Hanging with three other friends — Aleni, Natasha and Brianna — the girls were doing what was maybe their third lap around the festival.How often do they visit Mecca in store? “Couple times a week” the answer came back.Each girl was after something different, though.”I’m all about skin care, making sure I have a flawless face,” Ashley said.”I’m obsessed with eyes, glamorous eyes,” said Brianna.”I’m obsessed with highlighters,” said Natasha.As the session started to wind down, the crowd was herded into the check-out area, where two long lines of cash registers were working to ring up purchases. Backstage was still a busy hive, though, gearing up for another wave of excited beauty junkies to come in. Mecca founder Jo Horgan was also hanging out there.There was still a day-and-a-half of Meccaland to go but she was thinking of next year’s edition.”Times five,” she said. “We’ve got to figure out how to do this expanded times five.”